There are many methods to use Shani’s Transit & Aspect of Shani has been used in most novel manners in Nadi Granthas like Bhrigu nadi, Deva Kerelam (Chandra Kala Nadi). To make this article simple we shall explore only few though in 1988 Shri C.S.Patel has explored the same but scribe has found that the current generation does not know of Patel’s work hence reproducing same with adage ‘Old Wine in New Bottle’.

One will notice the specialty of Nadi Transits which is what normal Parasari doesn’t show Nadi Transits will reveal explicitly when the ‘Methods are Mastered Over a Period of Time’ with ‘Repeated Usage’.

“ When transit Saturn coincides identically with the natal position of the lord of the 8th house FROM a particular house or its trine positions, the native will experience mental upsets due to denial of results signified by that particular house”

Kindly re-read the above verse and grasp 4 postulates: –

Step 1: If Saturn is transiting through a house having a planet (A) in natal chart, immediately check this planets’ (A) is owner of which houses (B).

Step 3: The significations of these houses (C) will suffer & thereby predict accordingly

Step 4: If Saturn is not transiting through a natal planet, check if in transit it is trines to any natal planet, note this as (A) and follow the Step 2 & 3 again.

An example would simply the above complicated-looking but practice-making-simple technique of Saturn’s transit. 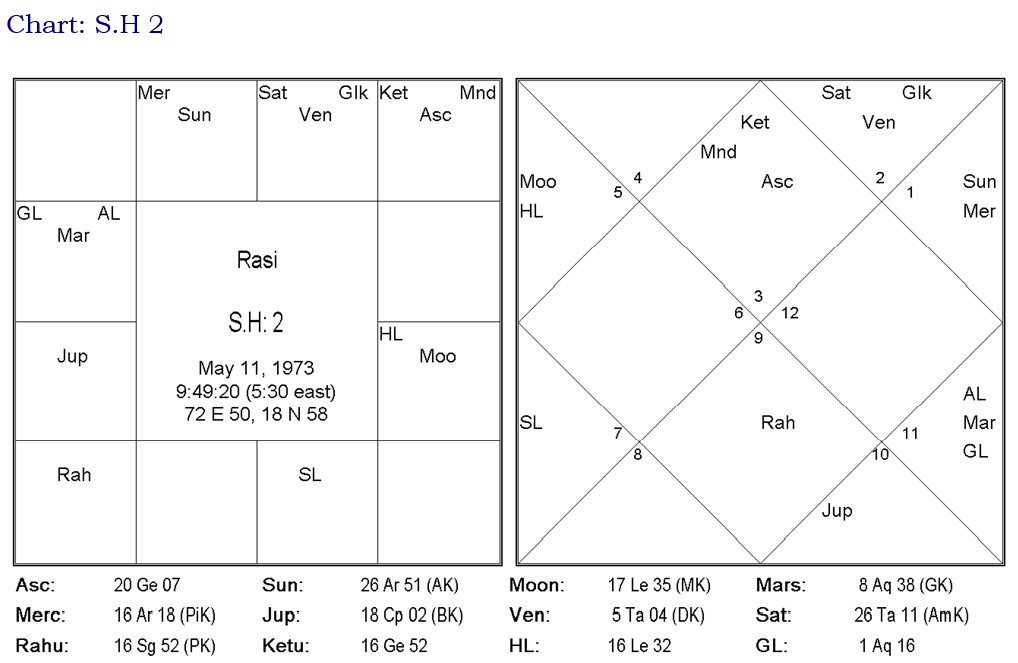 Step 1: If Saturn is transiting through a house having a planet (A) in natal chart, immediately check this planet’s (A) owns which all houses (B).

Step 3: The significations of these houses (C) will suffer & thereby predict accordingly

Final Prediction: The native was in partnership with 2 socialites for a New business Opportunity (5H) related with spirituality, the dotcom bubble burst around May and slowly their business venture closed down after mutual consent around July 2000. Significations of 5H, which is 10th (career) from 8H of spirituality, hence spirituality related business & also 10 H suffered.

Observe the closeness of the degree of Sat with the planet in question Ven, apply the 100 kalas orb that we read at the start of this paper & this works.(SJ: Alter this line ‘start of the paper)

Hindsight: If we would have taken the normal way of looking at Saturn’s transit we would have seen it affecting 2nd house, 6th house & 9th house & then made some connection but do we get a more clearer picture with the above technique, it’s left to you all.

(SJ: what about the technique of Sats 8th aspect is that to be mentioned here)

Sat trine in transit to another planet

Step 4: If Saturn is not transiting through a natal planet, check if in transit it is trines to any natal planet, note this as (A) and follow the Step 2 & 3 again.

Process: Let’s assume that in the same chart Sat is transiting Ta and there is no other planet, but is it trine to any planet, yes it is trine to Jup (A). Now follow step 2 & 3, which would be seeing the ownership of Jup, which is 7H & 10H (B). Now check these two houses are 8th from which 2 houses (C) & we would get that 7H is 8th from 12th house of expenses & foreign, whereas 10H is 8th from 3rd house of TV & initiatives.

So can we predict that the significations of 3H & 12 H would have suffered?

Final Outcome: During this broad period of Sat’s journey through the sign Ta, the native was jobless for the complete part except 10 months, the native is from TV industry (3H) & we can see that those significations suffered, also he just sat at home and expected a job to come to him thereby showing lack of initiatives. Let’s now come to 12H significations, he suffered heavy expenses, went abroad and was not successful thereby giving loss of lot of money, in fact after Sat went into Gemini he started a business and as soon as Sat came back into Ta during it’s retrograde motion this business closed down, which was of making movies in Australia.

I hope only one example is enough for the readers to understand this technique.

After studying 8650 verses of Bhrigu Nadi, Chandubhai capsulated a gist of Saturn’s transit as mentioned in the nadi text, it is a simplified version of the 1st method where only Saturn’s transit is analyzed by seeing in transit it is 8th from which house and thereby the significations of the house suffers. E.g. if Saturn is in the 2nd house the natives spouse will be subjected to trouble why? Since 2nd house is 8th from the 7th house of spouse. Same way we should deduce results for other houses.

Scribe had promised at the earlier part of this paper that he would reveal why if Saturn is in the 1st house in transit, then 3H,6H, 8H,12H significations suffers. The scribe asked scholars who have done astrology for 15-20 yrs but no one could reply to him the answer to this riddle. Let us go back to the translation from one of Chandubhai’s work from Chandrakala Nadi (Madras Govt series)

Clearer Understanding: In order to understand the above verse we have to take first the house through which Saturn is transiting and the 3 houses which Saturn normally aspects. The suffering and afflictions are felt on account of those houses from which the above four places become the 8th houses.

Let us go deeper in this not so normal astrological way of looking at a transit, since if you ask a normal astrologer where would Saturn effect if he is in the 1st house, he would explain matters of 1H, 3H, 7H, 10H but never would he guess 3H,6H, 8H,12H.

Let us take examples of S.H 2 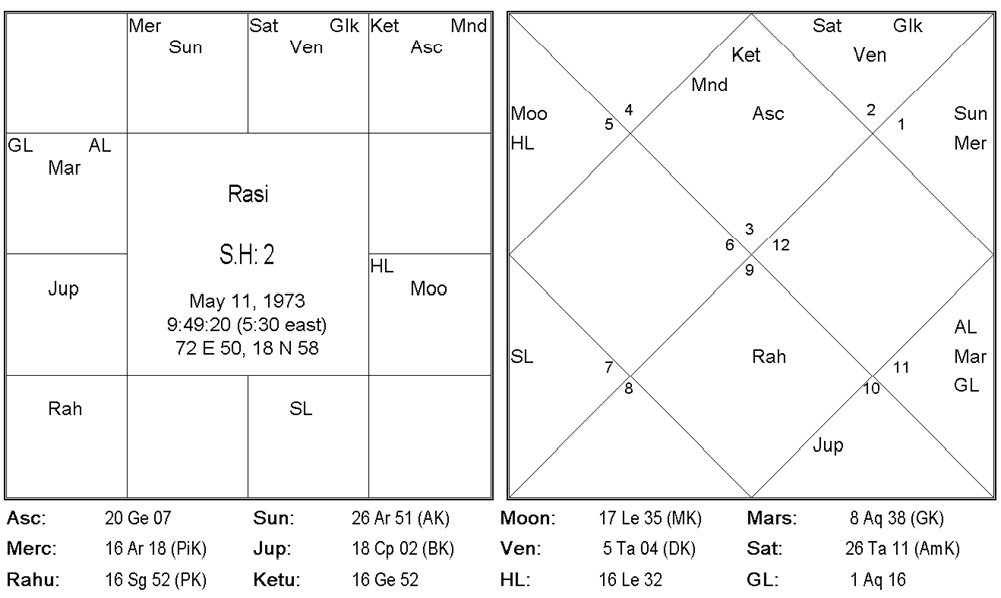 This way we can see how with more clarity and in-depth the nadi principles work. Does it mean that whenever Saturn transits the lagna similar results would be obtained to the T, ofcourse not but the flavor of events can be there if other factors also support it. Dasas being primary, let us also not forget that in the above native’s case the dreaded atmakaraka replacement is happening & is closer to its age of completion. Sat replaces Sun, age of Sat is 36, hence by 36 it should be complete. Sat is the Amk, Jup becomes the natural Amk during this replacement, as Jup was strengthened by wearing of stone, certain amount of sanity was restored in the native’s life.