Spectacular Predictions with Just Degrees an Attempt by One

With prayers to Lomush Rishi we start this work to give us success in this, as it was he who revealed the usage of degrees to his wife Suvarna, though at this stage I am unable to discern the methods mentioned by him. I pray to Lomush Rishi to kindly grant us knowledge on this by the end of this paper as scribes friend is deciphering Lomush Rishis method (these are written as personal notes to be distributed among select personal friends)

2 yrs back in July-Nov 04, when we had finished working on Patels exposition of the Hora Sara Method, we had tangentially then thought of the usage of degs. At that time due to no encouragement from seniors very little testing was done. What was the basis of the testing. Say why is Ven or any other planet at only 17 degs or 20 degs why not at 19 or 24 degs, at cases navamsa (the  Fruit of a Chart) also doesn’t change so what’s the use e.g a planet in 2 deg Aries or 3 deg will still be in Aries Navamsa but do the planets behave differently at different degs. Shri M.C.Jain & few others has done valuable work in their books on nature of different degs yet no prediction through it, but here we had a theory which as usual was rejected instantly by great astrologers who had spent 30-40 yrs in astrology. There are only 30 degs in a sign so all years of life cannot be covered, there might be a method to go beyond the 30 yrs but is not the scope of this paper.

Astrological community is a bunch of the finest butchers & crucifiers in the world with self appointed critics as if they have read even the scriptures that were burnt or lost. When someone comes with a Tip of Iceberg research instead of taking it forward, its tarnished mercilessly. Thanks to the encouragement of one of my senior mentors the legend, Shri K.Bhushan who himself has been on this quest for degs predictive element we poor souls survive. After all this study of various charts that u would read was done, it was mentioned to Bhushanji about such a method, he immediately said that he has few pages from BPHS of Venkateshwara Press where something on degs has been mentioned though not the same. Scribe has in its possession those pages written by Lomush Rishi (included in BPHS) but no head or tail can be made due to language barrier. For many even the idea of using degrees to predict is madness, but thanks to Bhushanji & Finn who spotted a line from scribes previous work that this has been completed so far, not to mention Vinay Patwardhan with whom this method was discussed in Jan 06.

There are many more rules which we shall see it in the examples to follow, also in the examples one would see a fine mix of ‘Fixing Astrology’ (Match fixing astrology !!!) & ‘Fast Food Astrology’ but the intention of this write up is to induce further research & fine tuning in this topic on which as far as scribe is concerned no one has ever written till now nor we have seen any astrologer ever use it. Match Fixing Astrology has two sides to it one the obvious for which most astrologers are accused & other side is it helps in ‘Development or Discovery of Techniques at times’ – the mixture of it can at times become ‘Observational Astrology’ which is far greater than any form.

The following is not a mathematical method but an intuitive method hence a more advanced student can get greater success & precision in this is scribes experience.

Degrees are everywhere but finding the planet/s that cause the event is the key to any prediction & even in this method. More the mastery of this science the better one would be than this attempt below.

We shall deal with only one or two planets in each charts (except detailed in Ex.8) to illustrate method & also to add variety. Native of this chart is an advanced sadhak, his father & grandfather were well known, both were excellent vedic scholars adept in mantra shastras. 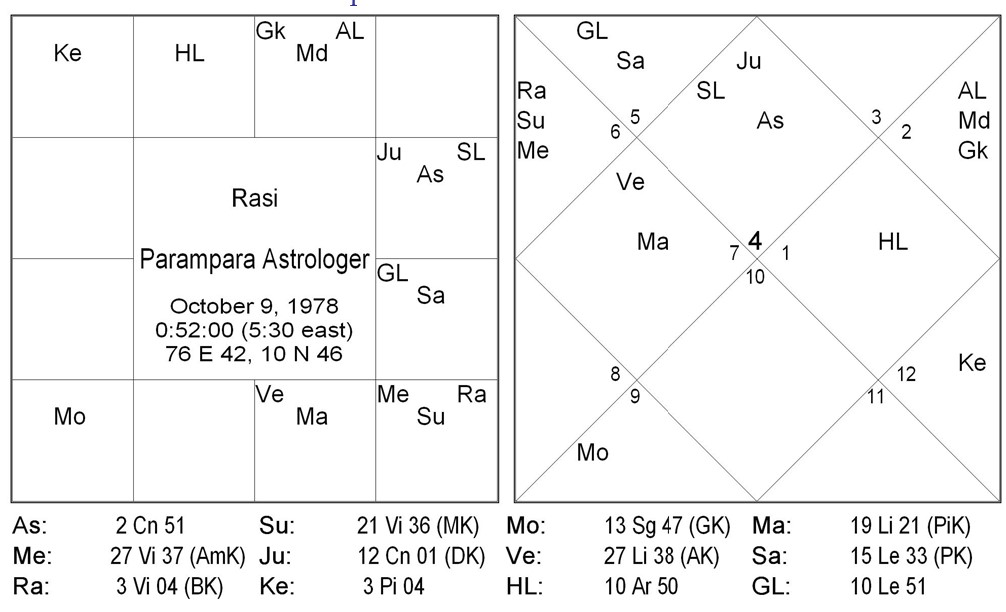 Total = 18th year (19th July, 1996)of his natives life his father expired suddenly which was in a fashion only true astrologers do it, he did his evening prayers, said GoodBye to his family members who were curious as to why he is saying that & then he slept never to wake up. The native further adds that “We used to do the Nithyapuja to the goddess. The puja ended at 8.30 pm as usual. He sat in the swing and started to speak with my younger sister on a particular stotra “Vishnubhujangam”. It is one of beautiful poems composed by Shankaracharya on his mother’s deathbed. It is mere coincidental that, on that day, we recited the same shloka. :)”

We can spend lifetimes arguing as to why we didn’t add the degs of Ven & Mars or instead simply use this technique & predict spectacularly with intuition, this scribe has no answer to the above dilemma except that one event will be at the age of Ven & another at the age of Mars & another two by adding or deducting Ven & Mars degs.

Note: Jaimini Karakas is to be ‘Only Last’ as an aid in determining nature of event, every time it won’t work the same way it is to be used in vim dasa.

Before we go on to the next chart, let us think that to master just one method of timing like say Vimshottari Dasa it takes us years if at all we master that too with so many books and commentaries to our aid, so to master any new method of timing how long will it take esp if we have just touched the tip of the iceberg. 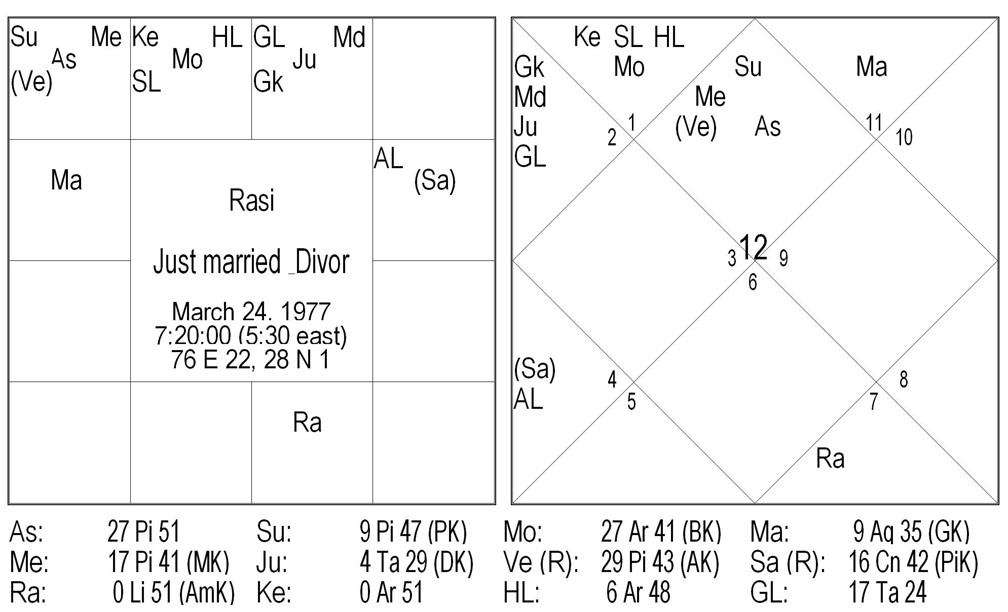 Pls note that Ven is AK (atma karaka – soul significator) so whatever happens due to Ven would be soul shaking events or/and very very karmic which is what happened in the years indicated by Ven. 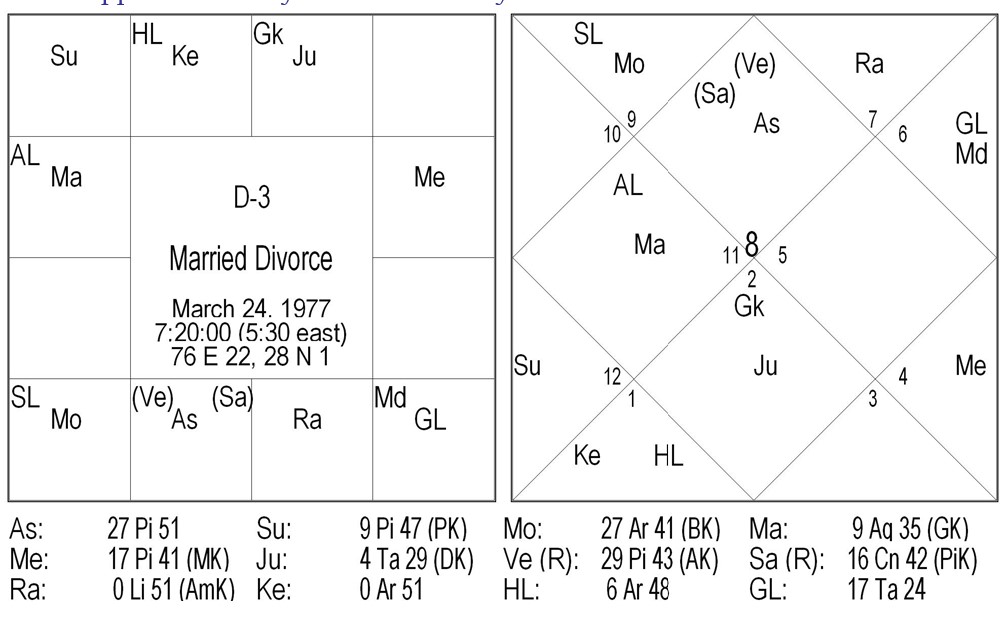 Arriving at Month of event

Theory 8: Retrograde planets are to be treated differently, since they are moving backwards. Rahu Ketu are constantly retrograde so it has to be treated 2 ways e.g. if Rahu is at 0.30 deg then it is in its 1st deg and/or also it has already covered 29.30 degs in that sign so it is in its 30th deg= 30th year. 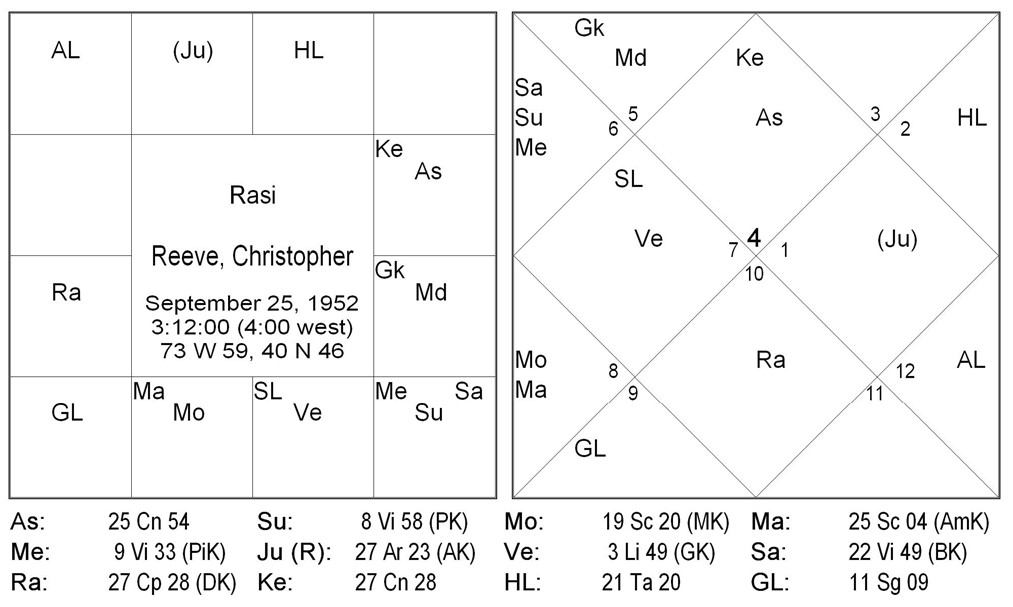 Event 1: Romance with the ‘S’ Emblem

When Superman of Christopher Reeves was released people fell in love with the Man of Steel, for the first time we could see a man flying – it was Wowwww. Reeves the eternally handsome man became embedded in the hearts of women & men alike world over, every one wanted to be him – Reeves fame was immortal as if he alone was born for this role they said.

So obviously his 5th house should be activated

Event 3: Fatal Accident while horse riding on 27th May 1995 which paralyzed him.

An event must be as usual corroborated by many dashas, many types of transits & many methods within this deg method to get confirmation of rough year 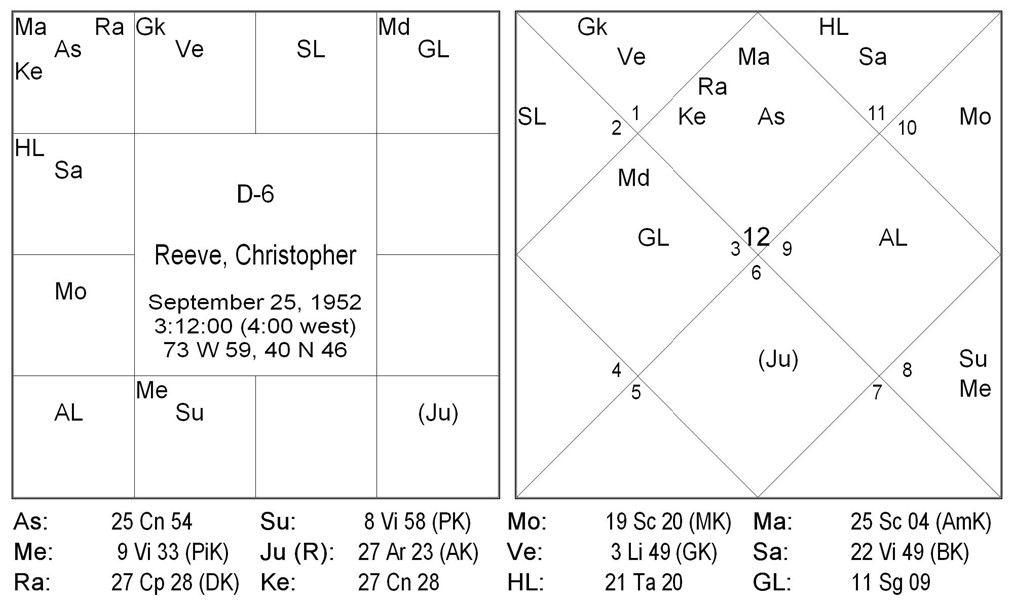 Confusion will always prevail and it is left to the most intuitive astrologer to decipher to choose the planets which to add with his experience, to arrive at as a confirmatory tool & use the right dasa to pinpoint further.

Food for Thought: It is common sense that all those who have ketu in lagna cannot die in the year indicated by adding both, but what it indicates is some event can happen to the body (lagna) in that year of non-good nature (ketu), when one gets the event year then one can check with 3 dasas minimum & transits to get conclusion.

Event 5: ‘Nothing is Impossible’ by Christopher Reeves on New York Times bestseller for 10 weeks 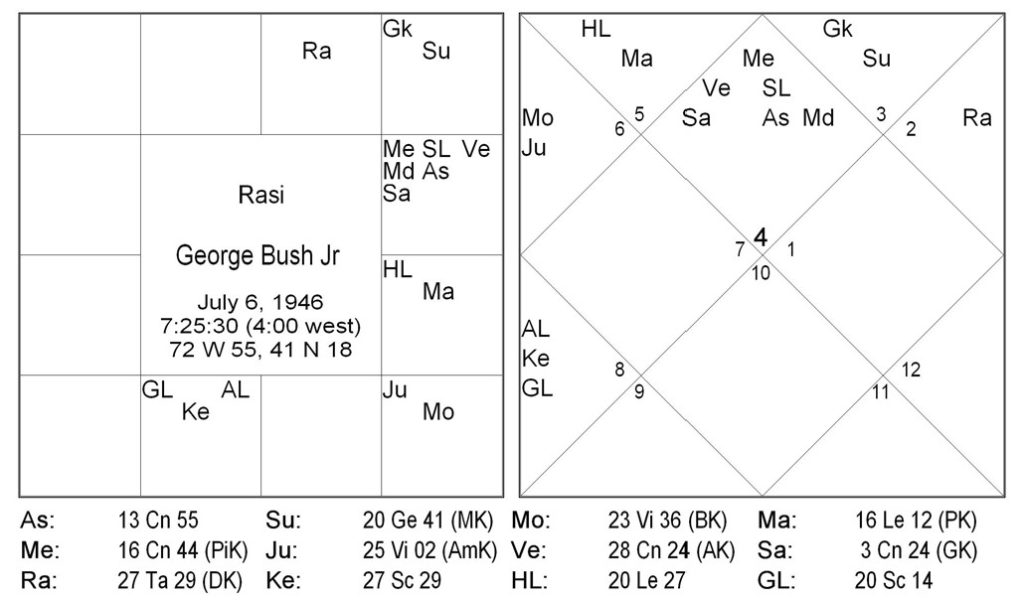 he became governor of Texas. (note by other method of roundoff we get 50th year). But when we predict we should always predict 49th or 50th year of life event can happen i.e. in 1995 or 1996. 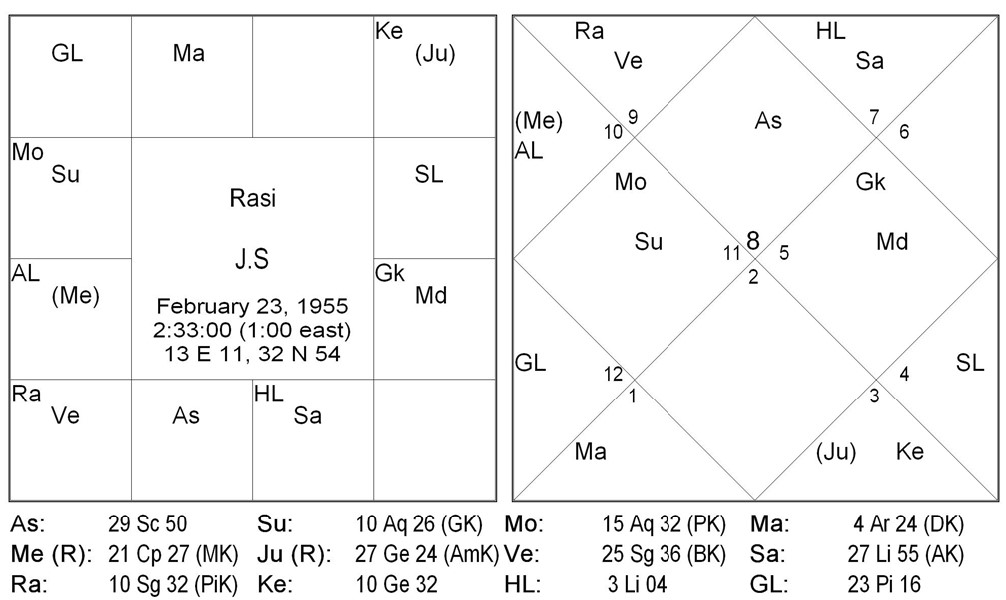 See, this was asked for two reasons Jup & Sat are both in the 28th deg, so 28th year should give results of 2H of family, end of marriage & also Jup is in the 8H of sustenance of marriage & career matters as Jup is amk. Now Sat also being in the same deg and is AK so some soul level deeeep karmic event can happen (combine this with Jups significations) & in Dec 1982 she decided to leave her first marriage, correspond this with Nav lagna deg which is in 28th deg so we get another confirmation that something re marriage can happen in 28th /29th year 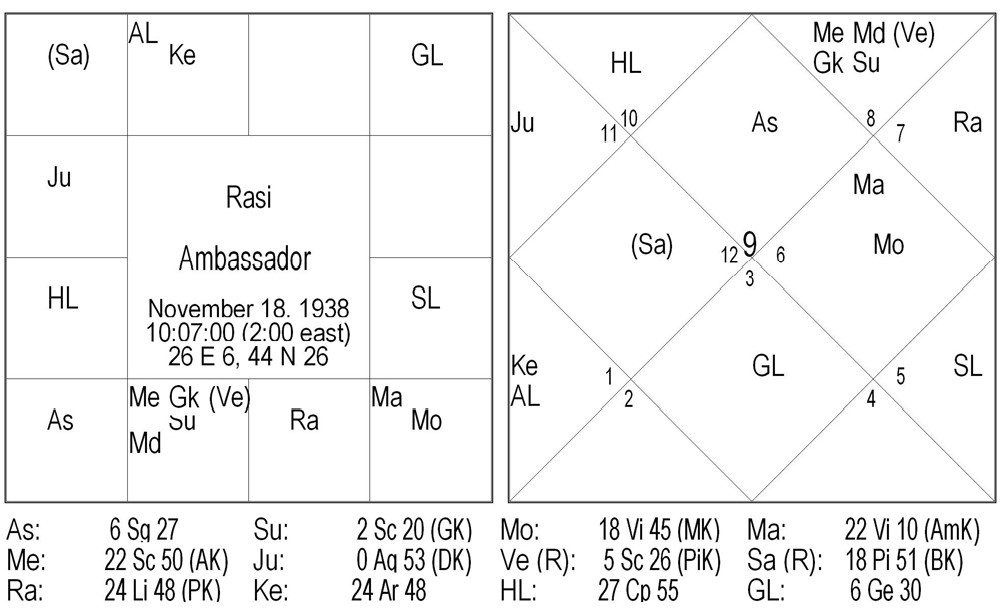 Chart belongs to a dear friend, who had a tragedy in life when his mother died due to mysterious circumstances of suicide. Before we see his chart, lets remember the great Prithyuyasas whose Navamsa method in Hora Sara is scribes favorite, where we see that he has shown us to deduct from a sign, that is reverse counting. Say if planet is in 3 deg, we deduct from 30 to get 27 deg and corresponding year.

Now Mother is Moon & in 18th deg so in the 18th year of his life some event to mother should have happened or to his mind or as it is in 9H of higher education with a powerful GKY in creative watery sign, and it should be at the fag end of his 18th year as Moon is at 0.50 minutes, he is born in Nov so in Oct – sept of his 18th year something should happen which is what happened. Higher education in classical music started in September 1972 at the Royal Danish Conservatory of Music in Copenhagen. 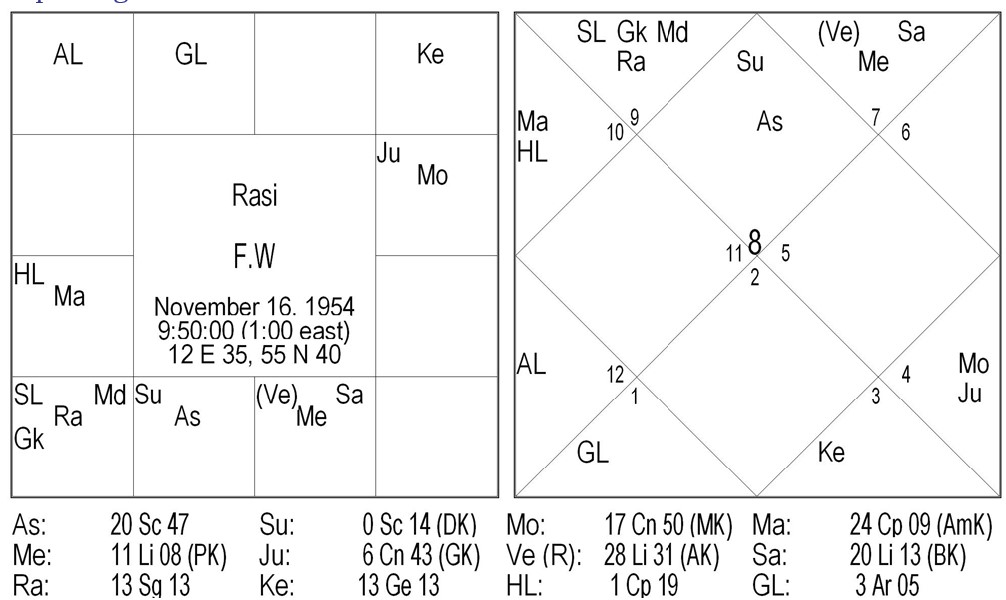 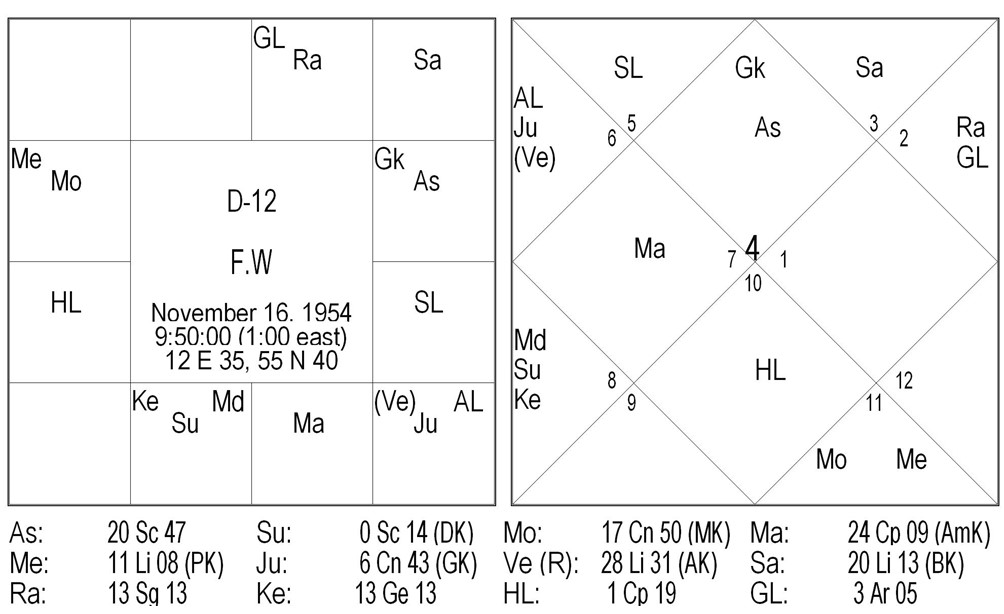 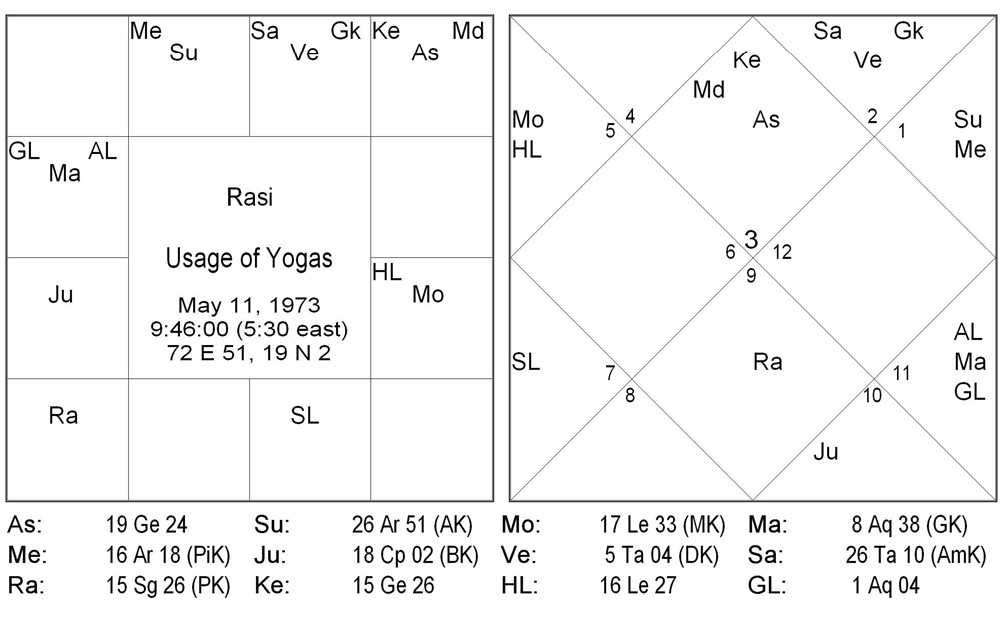