Believers of astrology, on the birth of an infant, are curious to know his fate and as to how his birth will impact the well being of the family. This curiosity is dealt by various astrologers using various approaches. Some astrologers approach current fate through rajayogas etc, some via Balarishta yoga, birth tithi constellation [nakshatra] etc. Some others approach through analysis of gandmool etc. The results are varied according to individual approach and the scope is also limited.

The solution to this problem is in the above given sloka by Varahamihir. If all astrologers use this sloka then their results will be similar.  The above sloka explains four yogas for auspicious birth.

Summarized below are the 4 combinations:-

Birth in a Vargottam Navamsa Lagna:-

A planet which occupies the same sign in both the birth chart and navamsa chart is said to be vargottama. For example, Aries navamsa in Aries sign, Taurus navamsa in Taurus sign, Gemini navamsa in Gemini sign, likewise Pisces navamsa in Pisces sign.

As per Kalyan Verma, individual born in vargottama lagna leads in the family.

By another opinion (Jataka Desha Marga), ascendant or ascendant lord in vargottama indicates being similar to Gods.

The second place from Sun is called Vesi. If planets other than the Moon occupy the 2nd from the Sun, Vesi Yoga is formed. Benefics are waxing Moon, Mercury by itself or in association with benefic planets, Jupiter and Venus. This yoga is formed only with these planets and not with the Moon.  That is, if the 2nd house from Sun has Jupiter Mercury or Venus then this yoga is formed. Child born in Vesi Yoga will be truthful, always lazy, have balanced views, happy, have self earned small wealth and will be tall.

Mantreshwar has said in Phaldeepika that individuals born in Shubh Vesi Yoga are beautiful, happy multi-talented, patient, religious, and reign over a number of people.

Somayaji has mentioned in Jatakadesh Marg auspicious results for people by his statement that Vesi is enchantingly gentle. [वेशि सौम्य वशात्]

3) Planets In All Four Kendras:-

Kendras work as pillars of a chart. If all the four Kendras are occupied by planets then “Chattusagar Yoga” is formed, the result of which gives an individual, longevity, fortune, good health, endows him with children and his fame spreads overseas.

Some scholars believe if all seven planets are present in Kendra it forms “Kamal Yoga”.  Those born in this yoga have a great reputation, are immensely fortunate and talented, but Varahamihir is of the opinion that all seven planets need not necessarily occupy all the four Kendras. Each Kendra must have atleast one planet.

Varahamir has said that the presence of Karak Planet in a horoscope is the best yoga. Any planet that occupies its own sign or exalted sign or Mooltrikona in Kendra is called as Karak.

Thus for a planet to be Karak two conditions are necessary. Firstly, planet should be in its own sign, Moolatrikona sign or its exaltation sign. Secondly, planets must be in Kendra [houses 1, 4, 7, 10]. If only one planet occupies Kendra, it does not become Karak, at least two planets should fulfill the above condition. In such a case both the planets are called mutual Karak. Planet occupying 10th house becomes ‘Special Karak’. Planet in 10th becomes a temporary friend and hence acquires similar qualities [तद् गुण सम्पन्नता].

Brahatjatak provides an example of the above with a Cancer lagna horoscope in which lagna has Moon and Jupiter, 4th has Saturn, 7th has Mars and 10th has Sun. Since Jupiter, Saturn, Mars, and Sun are exalted and also in mutual Kendra, they are mutual Karak. In the example since Moon is in its own house in lagna and Saturn, Mars, Sun are in Kendra from the Moon and exalted, hence Moon is also considered to be a Karak planet.

A] In the above, Cancer lagna is merely an example. In any movable lagna, planets in same position indicate mutual Karak planets.

C] In dual sign lagnas only three planets – Mercury, Jupiter and Venus – placed in Kendras form Karak Yoga in a variety of ways. Venus is exalted in Pisces. Mercury is the lord of Gemini and Virgo. Jupiter is the lord of Sagittarius and Pisces.

The above opinion of Varahamihir is generally acceptable by all but some scholars have different views making it more liberal.

The following are the various views –

A] Parashara has said two new things in relation to this yoga.

If the planets are in mutual Kendras from any position they form Karak Yoga. It is not necessary that they should occupy only Kendra in the birth chart.

B] Chankya is also of the same opinion as Parashara that a planet in a friendly sign is a Karak. Besides this, a planet in exalted navamsa, own navamsa or friendly navamsa is also considered a Karak. Planet is a Karak in any house.

C] As per some other opinion a planet in other than exaltation or own sign placed in lagna, 4th or 10th in natal chart is also a Karak.

In Cancer lagna Moon in own sign and Venus in own sign in 4th forms Karak Yoga which shows auspicious birth. Jupiter in 2nd from Sun also forms Shubh or Auspicious Vesi Yoga. 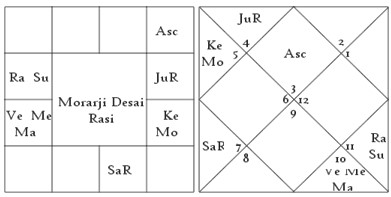 There are no planets in Kendra. Three planets are exalted – Jupiter, Saturn, and Mars – are placed 2nd, 5th and 8th from lagna and are in mutual Kendra. As per Parashar Karak Yoga is present.

I hope that the reader will benefit with the above methods.