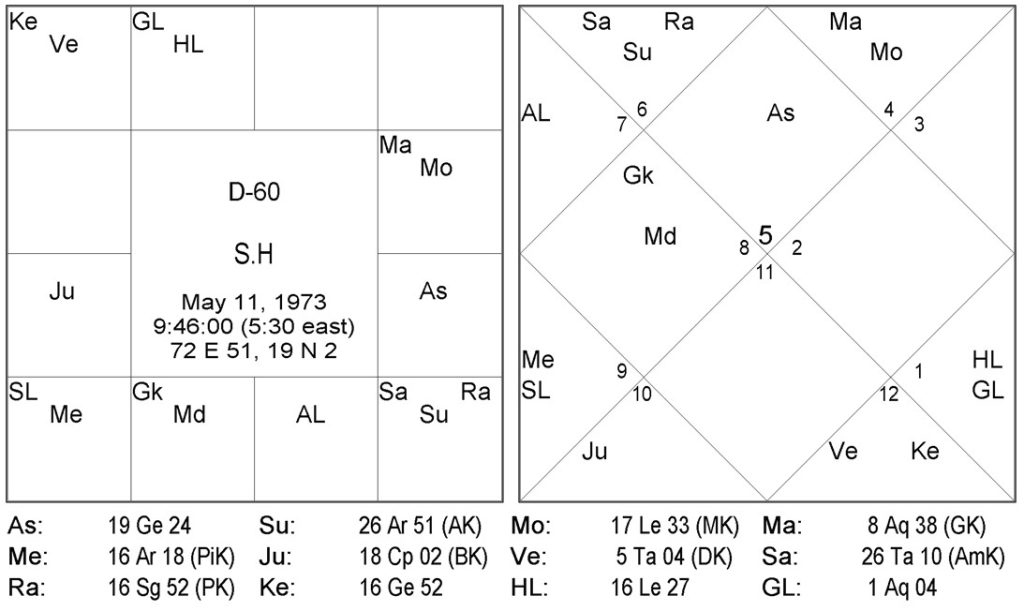 Step 2: Now see Transits of planets noticing their degrees in their D1

Ven is 10L in 8H showing a downfall in career aspecting 12H of abroad & 2H of wealth and family in D60 chart. Ven is also 3L of TV career and travel associated with it in 8H of abroad. Rahu is 7L of profession in D60 so his transit needs to be observed.

a) During the whole period of Rahu in Pisces the native was abroad in an exalted position (noted Ven is exalted) but this Ven is with Ketu and the term is Nash pade pade meaning at every step there would be downfall. The D60 Asc deg is 24Le09 so when Rahu will come at this deg in Tr in any house there should be some event. In Pisces at 24.09 deg Rahu Tr was on 13th July 2005, it was exactly during this period the native faced huge problems at work & it was the start of nightmares.

b) Deg of Ven in D60 is 3Pi52, Rahu transited this point on 31st July 2006, it was in this period at the start of July native got job as President of TV company in Afghanistan with fat pay packet, see Tr Rahu is on Exalted Ven of D60, he had to give up this offer due to family opposition (observe Sat Sun aspecting Ven & Tr Rahu from 2H of family), this Tr Rahu in turn was aspecting 9L of abroad/bhagya which is in 12H in a good money yoga. The 2nd offer in a beautiful island country suddenly went dry all of a sudden which shocked native as he was banking on this. All this created huge fights with parents and the native felt victimized that every job offer was being rejected by parents, he got into major depression and this occurred exactly when Tr Rahu was degreecal kinds on The Degree of D60 Ven’

Event: Break of a Big Dream

The native had left his high profiled job to create an spiritual web portal with 2 business women who were mini celebrities. Kindly see the 12H of D60 where Moon Mars is present, 9L with 12L in 12H showing a spiritual combo in the 12H of spirituality. The native was about to travel to America to procure funding from one of the topmost Indian on Wallstreet, but during May 2nd week of 2000 the biggest crash in stock market history happened on Wallstreet and by the start of June the natives partners decided to dissolve the company which left the native emotionally broke and without any job for the first time in his career. Kindly notice the deg of Moon in D60 3Cn08 which was Transited by Rahu on 1st June 2000 causing the downfall.

One of the easiest ways to use D60 without worry about ones D60 lagna is correct or not is to use the Moon in ones chart in D60, Moon usually doesn’t change sign in D60 for nearly 50 minutes. One do Sign Transit or use this degree transit on Moon degree. See above chart Moon is in 12H at 1Vi30’ and is the DK (Darakaraka – signifying spouse) in an exchange with Mer® , this exchange is not good, additionally this Mer is 3L & 6L from 7H of husband showing husbands brothers or cousins. For additional parameters one can use 7L Mars as center point and see that this Mer is in the 8H from it signifying some inheritance matters, but it is a)retro b) in uncomfortable exchange (remember 12H exchange) so some matters concerning husbands property would happen when any planet transits Moon (the exchanged planet).

The scribe asked this native if a) any negative happened in May 1997 or b) plus minus 6 months considering the scope of the transit of Tr Rahu on Moons degree of D60.

OH YES!!! …something of a significant nature did happen in my life of negative nature…

In the late part of May of1997 is the time when husband had a final falling out with his family and quit his job. It was a very tragic, scary and stressful time in which I cried for weeks and weeks because of a deep family betrayal and fear of our future. It was one of the lowest times of my life.

*After finishing this whole article (rough notes) scribe just browsed on curiosity as to which dasa the native was running then and its Mer/Mer/Moon – the two planets that we talked about earlier J . This write up is about Transits esp Tr Rahu and hence we will try to avoid dasas discussion.

Event: Loss of more than half a million dollars through stock market around May 1996. 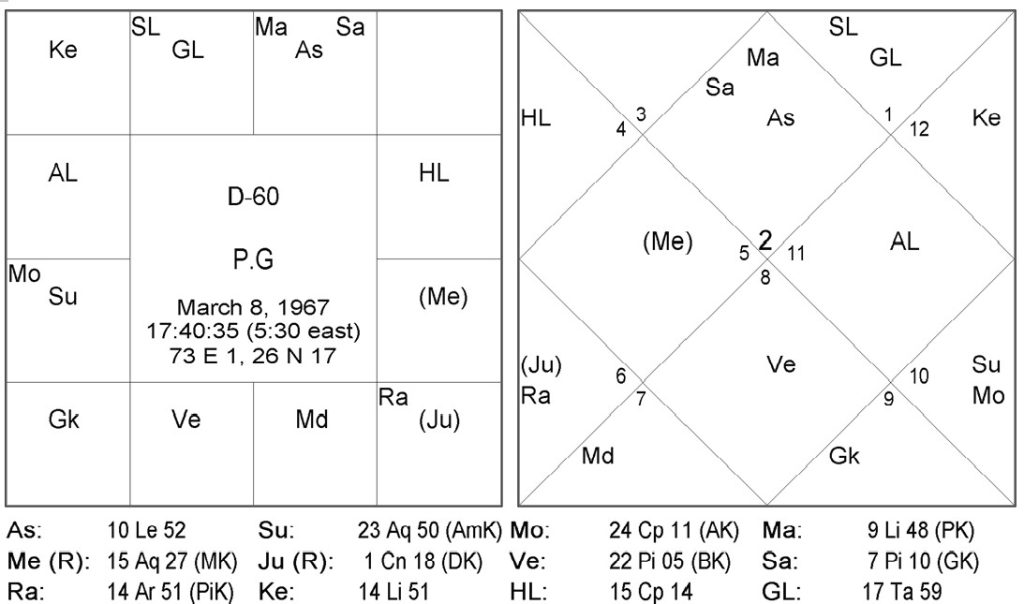 11L of gains/money & 8L of sudden chronic loss Jup is retrograde in 5H of speculation. The dasa was of Jup/Mer see Jup is in Mers sign with Rahu (illusion of gains) & Mer is in 12H from 5H in 4H of fortune & retro showing reversals.

1.Tr Rahu was in Virgo in 1996 and during months of Apr, May, June native lost 2.5 crores in the stock market, whereas many top jyotish authors had said otherwise as per what he told me.

***In this chart with little working scribe feels true nodes are functioning, scribe is not touching the topocentric, geocentric and ayanamsa issues here.

It is admirable that the native is still friends with those famous writer astrologers and does not carry malice against their wrong guidance, rare to find such traits in people. 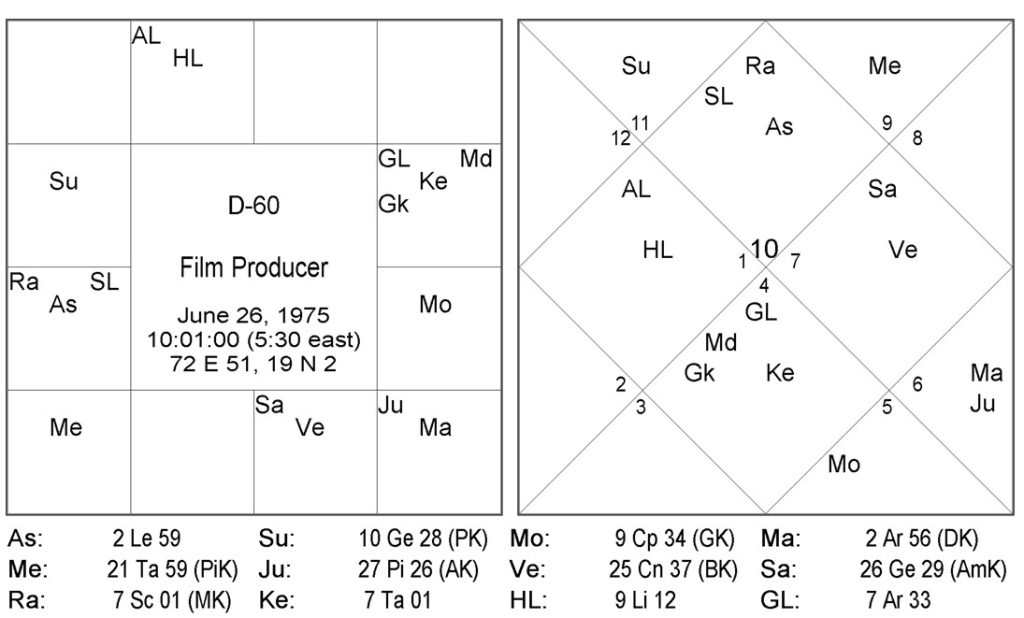 (Chart details of this chart cannot be distributed pls, this write up is only for my close jyotish friends & mentors).

1.b) Additionally Tr Sat at 2Cn aspected natal Ketu who is at OCn47 in D60. but what is most noteworthy is that Tr Sat was Bang On Ghatika Lagna who is at 2Cn39 effecting his Power & Fame (Ghatika lagna) very very badly and even till today people ridicule him secretly for this failure.

Dasa of Rahu/Ven/Jup (see above Rahu & Ven afflicted in Tr) & also Tr Jup & Tr Mars in Vi right where his natal D60 Jup Mars are present in a bad exchange with 12H of loss.

Scribe doesn’t want to push this method but is requesting fellow readers to kindly explore D60 degreecal transits with an open mind in future charts they see & if possible kindly give feedback as it will help in further learning.

Thanks so much for ur feedback, oh its not a new technique its just the D60 method (articles u have), if u wish I will explain the method again.

1.a) Am pressuming that David’s falling with his family & his job were seperate, meaning did he work for the family business or something ?

Oh sorry for the confusion…he worked for the family business, yes, so the falling out was also about the end of his job he had been holding since 1984.

1.b) Can you indicate the relation of David with whom he had falling.

Father, mother, elder brother and younger brother and dozens of employees…David reconciled with the parents in 1999 but never went back to work there. Later the parents gave him some money as a pay-off but it was not enough money to make a difference really.

1.c) U said there was a deep family betrayal (in the next line), did someone from ur family do it to u, can u indicate the relation (cousin uncle etc etc)Father and brother and mother betrayed David, and worse, one of the employees named John Keohane and his wife weasled their way into a close personal relationship with the parents in 1994 and began systematically stealing the business around this time, and by 2003, they had taken everything from us and now they own the business, which is a specialty supermarket named after David’s father (Henry’s Foods) which has been in business for 60 years, which is hugely successful and it was to be our gold mine for life, as it does 15-20 million a year in revenue. David had owned 1/4 of the company in a trust that paid us a substantial sum of money, but in 2003 John Keohane said the company was not doing well and he could not give us dividends any more, and he offered to pay David and his two brothers a modest sum of money for each shares share, and the brothers were forced to take the offer by their father and John Keohane. It was a huge betrayal in many ways over and over again. And now we are nearly bankrupt because of this loss, and our savings for life are minimal. Sad story yes?