Gems and Astrology by Alok Jagawat

Astrology and gems are associated from times immemorial. Astrologers often recommend gems and associate them to planets. While the association is clear in so many classics, the wearing of gems for particular planet is not mentioned in classics.

Please note that ‘Gems’ refers to ‘Ratna’ and every stone is not gemstone. Classics define “Ratna” according to following basis: 1. Gems taken out or mined on inauspicious Muhurta have ill affects despite of being good in luster and appearance.

“Stones originating on inauspicious days and at unlucky moments are not only void of any beneficial quality but are positively harmful”(Ratnajati Adhyaya, Sloka 6, Manimala)

(Most of gems do not fulfill this criteria. This is because as a Gemologist and gem buyer, I have come across several gemstones and they are mined at commercial level and not on the basis of some auspicious Muhurta )..

Good, clean and gems of top quality bring good luck to emperors and those which are of bad quality bring bad luck. Hence an astrologer should first check the gem for quality and only then he should provide it to others. Gems are carriers of fate. 3. Gems are worn after certain propitiation and rituals like removal of negative influences through proper mantras.

Point 3 : is my own view. I believe that only ‘Ratnas’ defined in classics should carry “Swapranavastha” (Self invoked state) and rest of the gemstones are just stones. To energize them one needs proper mantras to invoke their powers which are positioned in dormant condition. This is the same as Idols of Deities need to be “Pranpratishtith” before they are worshipped. But Shalagrams and Dakshinavarti Shankas have their own powers and they are never invoked through Mantras.

4. A gem which is powerful and fulfills above criteria gets devoid of its power when the inheritor is an impure person. Please refer to the epic related to Syamantak mani.

Prasena was the brother of Satrajita. Once Satrajita took up his abode in the seacoast for the purpose of spending his time in worshipping Sun. After he prayed long and intently, Surya dev appeared before him. On being accosted, the divine Sun took out the gem Syamantaka from his neck and laid it out. Sun gave this Priceless jewel to Satrajita. It is said that on wearing the gem he appeared refulgent like Sun and entered Dwarka. Satrajita.

later transferred it to his brother Prasena.  When own by a clean man Syamantak produced gold, but to an unclean person it indubitably proved fatal. Prasena decked this gem and rode hunting into the forest. He killed innocent animals on account of which the gem altered his destiny.  His impure heart bought his untimely fatal death when a  lion slew both the horse and the horseman.

When we look at above criteria, it is very clear and evident that an average man, who is bound by restrictions of average income cannot possess above kind of “Ratnas”. Gems will come to you if you own a powerful horoscope and trust me they will fit above definitions. Considering the authenticity of wearing gems, certain classics do not mention them as remedies. Rather, they are mentioned as powerful Talismans related to certain planets.

Remedies include Mantra, tantra and Yantra for propitiation of planets. It is a fact that your deeds can never be altered. Nothing can entirely mitigate your deeds. But you can lower the intensity of mishaps in your life if you can read what planets signify. A wise astrologer can tell you about some prayer, a stone or a ‘yantra’ that will help you bear the fruits of your deeds. Your soul may never escape the clutches of your ‘karmas’ but with remedies or Parihar you will get strengthened enough to bear that.
While remedies are meant for removal of harmful effects of planets, talismans are entirely different things. They are meant for either providing one with special supernormal powers or for some definitive purpose. For instance gems can be recommended as remedies to a person when a particular planet is weak but benefic. Through a gem one can increase the intensity of its beneficence. But when a Mukta like the “Shankhamukta” is worn, it will give you all round power, devoid of its relation with any planet. This is because “Shakhamukta” is a Devmani which carries special powers and charm.

In those times gems were not available easily. One cannot acquire them because of the low grade methods of mining. Now with the advance facilities of mining and lapidary, gems are within the reach of certain class of people. Still they may or may not fulfill particular criteria and may not affect people as been mentioned in classics.

For example in the “Ratnaparikshadyaya” sloka 14,  Varahmihira defines the qualities of a blessed diamond:

A diamond  which cannot be cut through any device (This means that a diamond should be hard), which appears heavier while held in hand, appears light when seen.

“Tarati Rashmivat” means which appears as if it is not touching the bottom when kept in water and then it should radiate light, and should shine with sparks and appears like fire and rainbow colors, then it  is considered the best of all.

Now match this criterion with presently available diamonds in stores, you will hardly find any diamond which will match this description. The effects defined in classics may stand true but gemstones should match their definitions for the same.

I can narrate an incident which is related to my life only. A person from Iceland came to visit me for astrological consultation. He became a good friend of mine and asked me to explain certain mantras and their process. He was devoted to lord Shiva and so, while he was leaving the country, I gifted him a beautiful Crystal Shivlingam. He was so happy with the above thing that he gave me a blue sapphire piece just as a token of appreciation. This sapphire was deep blue in color and fulfilled every criteria mentioned in the Shastras. Moreover it had a blue sheen like a peacock’s blue shine on its long neck. I got it embedded in Gold and performed the rituals mention in the classics. I wore it and the experience I got, is unparalleled. Unlike whatever is been mentioned in classics, I had a totally different experience. I constantly felt a cold sensation near my solar plexus and my back. This sensation moved towards my head and my head remained cold most of time. I felt as if somebody had kept ice on my head. I also felt that a golden hew surrounded everybody I used to talk to. As if this was not enough, there were times when I felt that I am not inside my body. I know, most of this would be taken as a joke, but what I have mentioned is true, word to word.

Later on I also understood the astrological combination which resulted into this kind of experience. I was born on 3rd March 1977 at 14:34:40 Hours at Neemuch, (MP) 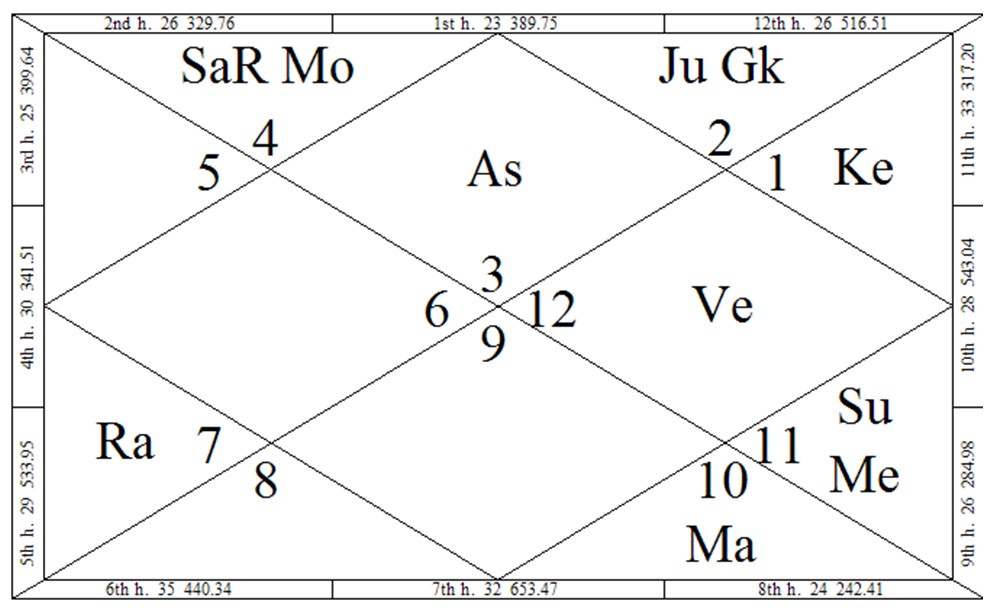 Saturn is a benefic over here as it is the lord of the ninth house and placed in the Nakshatra of ascendant lord. Mars aspects it as exalted planet. Moon +Saturn often cause “Pravjaya” like situation when it is aspected by Mars. Saturn and Moon both occupy the Dhanur Navmansha which is Jupiter’s sign. Saturn occupied Meena in Vimshamsha and hence it created that state of liberation.

Please note that gems have particular powers and when God needs you to be out of troubles, he can definitely show you his powers.

Remedies affect a person only in certain cases when the mantra is properly invoked and then denailed. Most of the sadhus initiate people with wrong mantras. The utkeelan process of a mantra could only be achieved through a proper Guru who understands and lives with a mantra.

Mantras were nailed by lord Shiva when demons started using them for gaining power and affluence. Their pronunciation was altered (Keelit) so that nobody can use them without proper knowledge and path. Every mantra has its own nail and bears an Utkeelan as well. The methods of Utkeelan are only shared through Guru Shishya Parampara and every mantra carries its own process. One is considered fortunate if he/she can obtain the utkeelan bejaas for their respective mantra. Please note that a prayer is like “Avahan” of a deity. Your mantras act as “Bhog” for Deities. But mantras without proper utkeelan do not reach out for Devatas. They act as “Bhog” for negative souls. Hence one should be very careful with mantras. Keelit mantras can bring mental illusion for its bearer and follower.

Same is the case with Yantras. Yantras have supernormal powers once they are charged. But they lose their power when the “Karta” or the owner becomes impure. The devatas which reside in a yantra leave it when impurity enters a “Sadhak’s ” mind.

Gems have the same criteria. They need to be washed with proper herbs and the person wearing it needs to maintain a high level of purity. It is better to wear them around neck then in fingers. Every gem should be purified before wearing. The purification can be performed by keeping gems in their respective herbs for a period of twenty four hours. Gems associated to planets which are malefic in a horoscope, should never be worn. 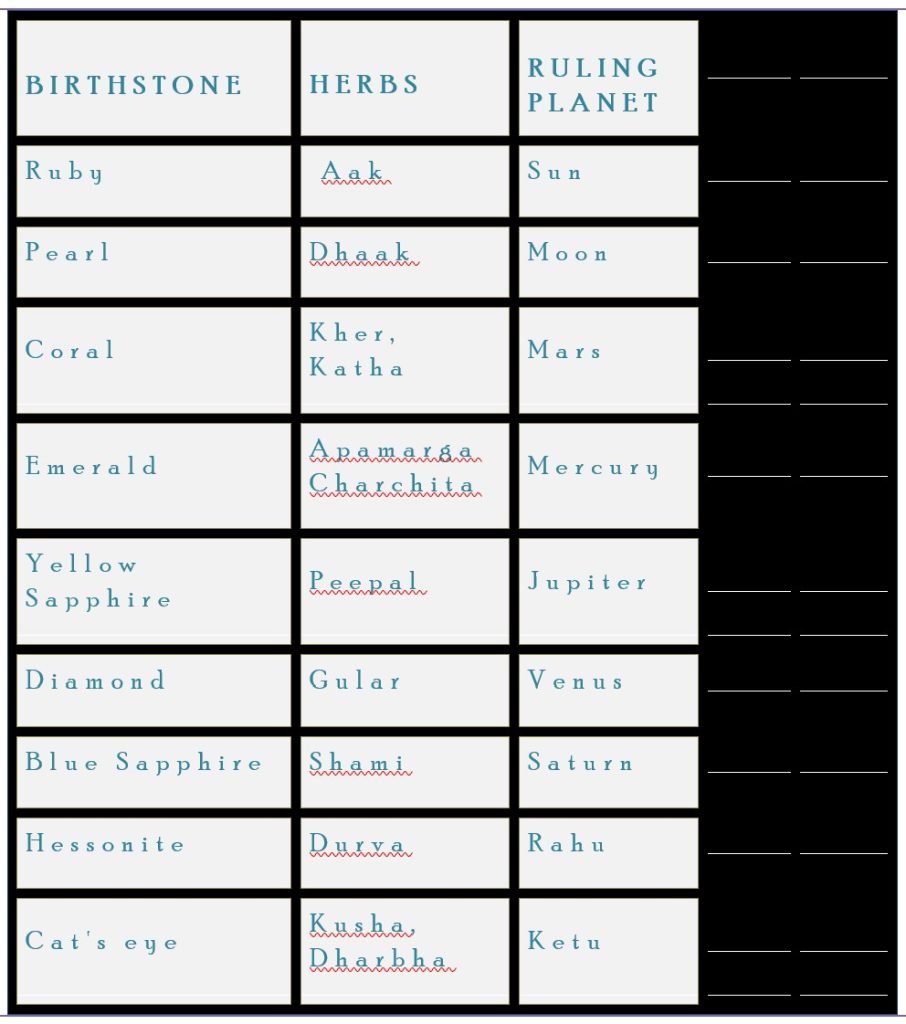 Donations of gems are indicated in Shastras as remedies. One who cannot procure high quality gems can donate their substitutes as remedies. Gems could be worn or affect a person if they fulfill the above mentioned criteria. Gems are often attracted towards people who have very strong Venus and who are undergoing a Venus major period. One can collect gems during such periods.

Gems which are not mined and are formed in animals, shells and other organisms are called devmanis and they bear supernormal powers.  These manis and muktas are mentioned in Chapter sixty-nine of Garudpuranam and “Mukta Laxnadhyaya” of Vrhat Shanita. They are very rare and cannot be obtained without luck. Please note that gemstones have nothing to do with money. Even if you have got too much money, you will not be able to procure a proper gem. There is a very simple reason behind it. You cannot change your destiny so easily.

Previous How To Predict Forex by Constantine Semenov
Next Saadesati: A Bane or Boon by Dr. Amar Agrawal