If a path of journey is straight and clear without any obstruction, our journey can be simple and easy without any tension. But whenever our journey passes through a dark portion, it becomes very difficult and obstructive to our journey while passing through this dark portion. We become very perturbed and disturbed. Similarly whenever North Node and South Node come in the way of planets which are revolving around the Sun, then path of these planets becomes difficult and they can not show their effect clearly according to their natural characteristic. The sign which is occupied by Nodes also create illusive result. In astrology, therefore, Nodes have tremendous influence on the planets and signs and give unimaginable results. Interpretation of this influence is very difficult.

The information given by our ancestral astrologers about Nodes are very useful but it requires deep thinking to interprete its predictive influence with reference to experience of present time. After continuous study and review on the basis of experience of fifty years in the field of astrology, the author has tried to give the specific interpretation about the influence of Nodes in this article.

North Node and South Node are only sensitive points and do not have physical body of their own. So they are considered shadow planets. But effect of these Nodes is observed similar to physical planets.

In an  agricultural land if there is a shadow under the big tree, it is observed that no crops can be grown in the area of this shadow. Similarly whenever shadow of these Nodes covers any sign of the Zodiac, it give unpredictable effect to that sign and also to the planet which becomes lord of this sign. According to the basic principle of astrology, North Node is considered mouth of serpent and it is broad that shows development, while South Node is considered tail of serpent which is narrow that shows restriction.

Whenever, North Node is places in any house in the sign other than signs of Mercury, Venus and Moon, it creates many difficulties for the matter of that house and planet which owns the sign and gives adverse result which can not be avoided. Therefore it is clear that North Node in the sign of Leo, Scorpio, Sagittarius, Capricorn   & Pisces does not give favourable result.

For an instance, if North Node in Scorpio sign placed in the sixth house, it creates difficulty in the service of a native. In this situation, native has to pass through tough period with quarrels and court case and it so happens that native has to leave the service.

South Node is favourable in fiery sign i.e. in the sign of Aries, Leo and Sagittarius. South Node gives beneficial result in the signs  of Mars and Jupiter i.e. in the signs of Aries, Scorpio, Sagittarius and Pisces. As per natural characteristic of South Node, it is a planet of restriction and impediment. Therefore, if it is placed in unfavourable sign other than the signs of Mars and Jupiter, it creates totally negative results for the matter pertaining to that house and planet which owns the sign. For an instance, if South Node is placed in the second sixth or tenth house in unfavourable sign such as Taurus, Libra, Gemini and Virgo, then the result of these houses is experienced totally negative, that is in the second house, shortage of money, in the sixth house difficulty in service and in the tenth house failure in carrier are observed.

For an instance, Venus is placed in Virgo and North Node is placed in Taurus. Here Venus is in debilitated sign, but North Node will not give adverse result of Venus because North Node is placed in its favourable sign of Venus. Therefore, North Node will give the beneficial result of venus. This can be interpreted clearly during vinshottary  Dasa System. In this case whenever, a native passes through Venus period, it will not give beneficial result. In this period a native experience shortage of money and prosperity. But when a native passes through North Node period, then native experiences good result of Venus and gets money and prosperity. 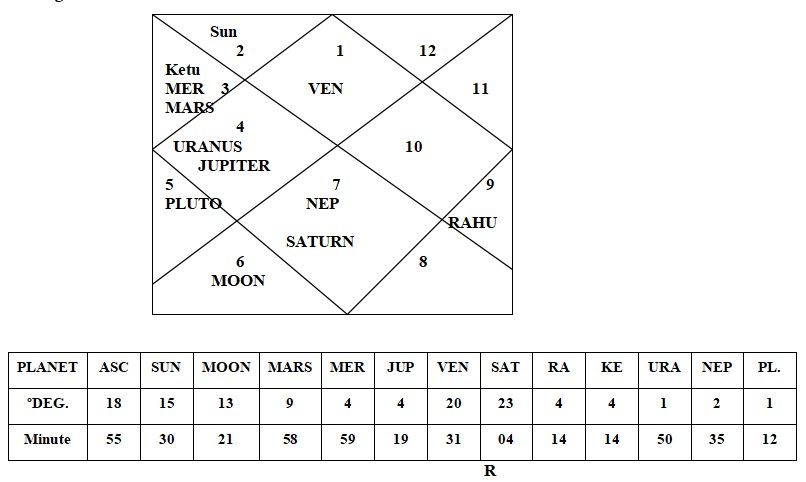 In the above chart Ascendant is in Aries and Jupiter is in Cancer placed in the forth house. North Node is in Sagittarius and placed in ninth house. Jupiter  is in its exalted sign Cancer. But North Node placed in the sign of Jupiter, is not beneficial for giving the result of Jupiter. Here North Node represents Jupiter. Therefore during the Vinshottary Dasa period  of North Node, it is supposed to give the result of Jupiter relating to the matter of forth house(Mother, House, Peace, Happiness etc.) , ninth house (father) and twelfth house(Bondage).

Here North Node is placed in unfavourable sign of Jupiter , therefore a native gets adverse and evil result for the houses mentioned above during the period of North Node. Ninth House shows the Father , but native’s father lost both the eyes and so he had to live in ordinary state during this period. In this circumstance native’s father was helpless & jobless & had to live under the care of relatives with complete dependency.  Native’s father lost his income and he could not have his own house. Therefore a native had to live without any facility of education and comfort and suffered many difficulties during this period.

For clarification of this principle, the following birth chart is given. 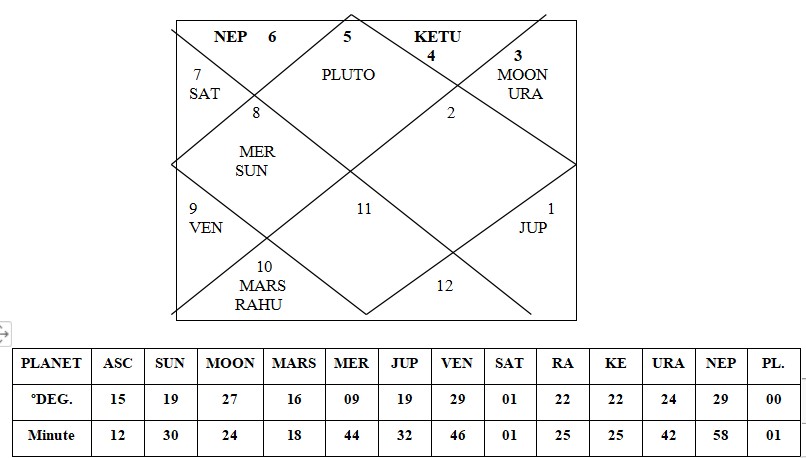 The matter pertaining to twelfth house is bondage, feeling confinement, restriction in every walk of life etc. Native’s home life is totally disturbed. Husband of a native is not of her liking. She has no issue due to ovary problem and therefore she feels lonely at home. Native feels confinement at her own home and seeks solace and peace at different residence of her relatives.

The matter pertaining to eleventh house is benefit and ambition. Native is qualifies with M.A. B.Ed with Library Science, but she could not get proper service according to her choice and wherever she has served, she could not remained more than three months due to her mental unsteadiness. Cancer also indicates liver in human body, therefore South Node is sign of Cancer gives adverse result  to digestive system. Native suffers from indigestion and acidity and has to take medicine regularly for this trouble.

Conjunction of Planets with North Node and South Node

For clarification of above principle, the following birth chart is given 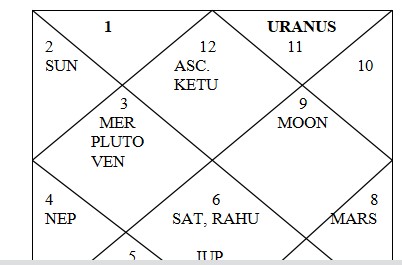 In the above chart, Ascendant is in Pisces and North Node is in Virgo placed in the seventh house in conjunction with Jupiter and Saturn. The native has following period of vinshottary dasa in his life.

During the period of Jupiter, a native gets good result about family and astrological activity. In year 1986 marriage of daughter and his son got service in insurance company, in year 1993, marriage of son in highly established family are the auspicious events in the life of a native. In year 1988, a native started his office in Ahmedabad for astrological Consultation. During the above period, native began to write a book on astrology and came across many chances to deliver lecture and teaching on astrological subject.

During the period of Saturn native has completed his writing of book on the subject “Art of Prediction in Astrology”. The book was published  with good response in November-2000. Again in year 2007, the second edition of this book was published. During the same year 2007, native has written a new book on the subject “ Prediction of Transit Planets”. Therefore , during the period of Saturn from 1-09-2000 and onward, native has achieved high esteem in astrology and public exposure. Considerable progress and development in astrological field is experienced by native during this running period of Saturn.

A Planet in conjunction, opposition or in square aspect to Nodes is considered as gripped planet when the degree of the planet is less than the degree of Nodes. The closest grip between planet and Node will be within five degree difference between.

Result of gripped planet is observed less than expectation or almost nil. If powerful planets are gripped by Nodes, they also do not give good result. There are all possibility to be wrong in astrological prediction whenever such type of planetary situation arises.

For clarification of this principle, we take the same birth chart as mentioned above.

In the above chart, Ascendant is in Pisces and South Node is placed in the Ascendant which is in square aspect with Moon in Sagittarius and placed in tenth house.

Therefore, Moon does not give beneficial result regarding professional carrier and prosperity in the life of a native.