There are many methods to use Shani’s Transit & Aspect of Shani has been used in most novel manners in Nadi Granthas like Bhrigu Nadi & Deva Kerelam (Chandra Kala Nadi) which are different from the traditional 3,7,10 aspect.

Legendary 91 yr old astrologer Shri C.S.Patel has shown nadi methods of Shani’s transit aspects in many unique manners one among them being Saturn aspecting 6,8,12 & 3rd houses from its transit position. We shall limit to only 3,7,10 in this write up.

D60 or Shastiamsa as it is called is tough to see due to inaccurate birth times as it changes lagna every 2 mins, but most planets do not change signs in D60 for many hrs.

Subsequent question gotten is should we use Divisional Transits have our ancient books sanctioned it, 99% of astrologers spend lifetimes arguing that it has not been mentioned, whereas some ‘Just Do It’ (that is just use it)

We came across a verse in ChandraKala Nadi Part 1 P.314, verse 3124 (below is translation by Shri C.S.Patel)

Verse 3124 : When Saturn transits Chandra Navamsa Rasi (Rasi represented in the natal chart by the Moons occupied Navasma Rasi) or the sign occupied by the Moon (in Natal Chart), the native suffers from enemies, mental anguish & humiliation from secret blemish.

Verse 2044/45 : When Saturn transits 8th from Chandra Navamsa Rasi, native will suffer great calamity during Rahu’s period and will have termination of some running favorable yogaphala or yogabhanga results.

Conclusion From Above Verses

Chandra Navamsa Rasi cannot be ignored, but while reading the above it struck on us to integrate the same on similar yet vast researches on Shastiamsa (D60) that we have been carrying out for some time ‘even with inaccurate birth times of 20-25 mins’

The moon sign in Shastiamsa (D60) is to be referred to as ‘Chandra Shastiamsa Rasi’ & it is significant to note that the Moon doesn’t change sign in D60 for a period of 50 mins approx.

Methodology in this Write Up

Note: (those who do not believe in Ascendant of a divisional chart or authenticity of exact time can ignore the house explanations)

Let us study if during these transits they went through bad times or good times. 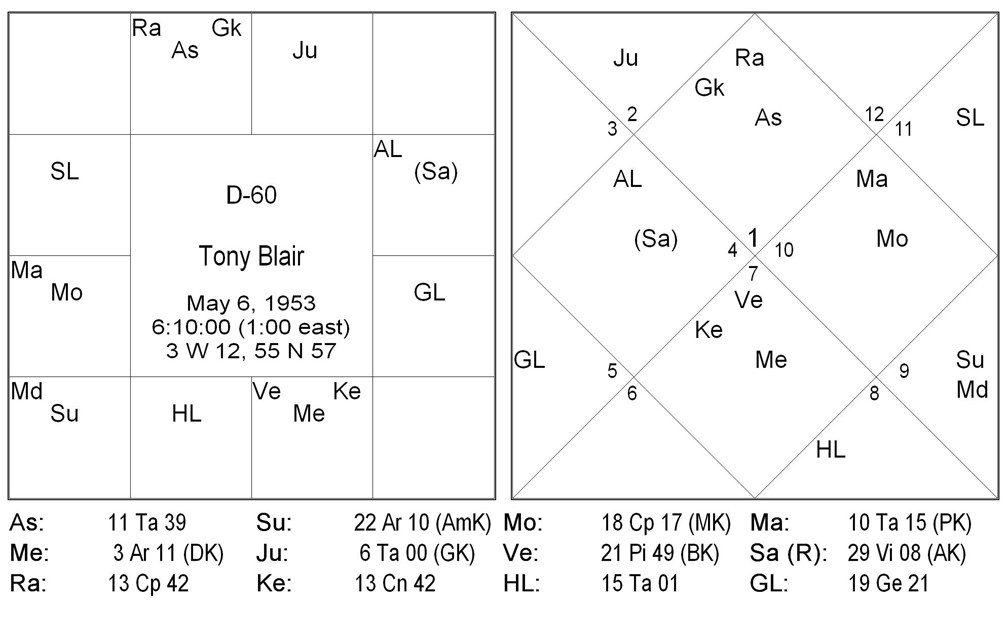 1.a) Lagna is occupied by 4L Ven (female) self will be dominated by Mother & native will love women (numerous affairs). LL (self) with 5L (interests) in 12H of charity, he could be involved with lot of charity. 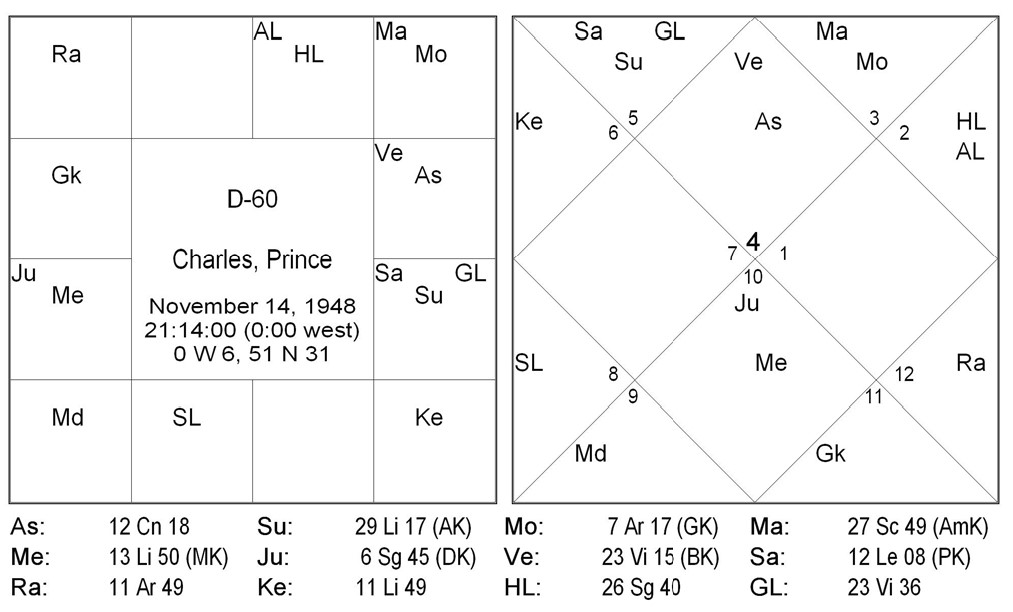 religions or support of them (he favors Dalai Lamas struggle)

One can go on and on ……….but someone’s personal tragedies are only a case study for astrologers.  The Chart with Cancer D60 lagna sounds so far correct.

Event 1: Wikipedia says By 1992, it was obvious that the marriage (with Diana) was over in all but name

Native held topmost post in one of the biggest media houses in India. In such positions has to do less work & more of engaging in corporate games unfortunately & once our luck runs out Lord Shani becomes free to strike.

Event: In Sept 2001, native was shown the pink slip & till date has not risen to that glorious influential position once commanded. 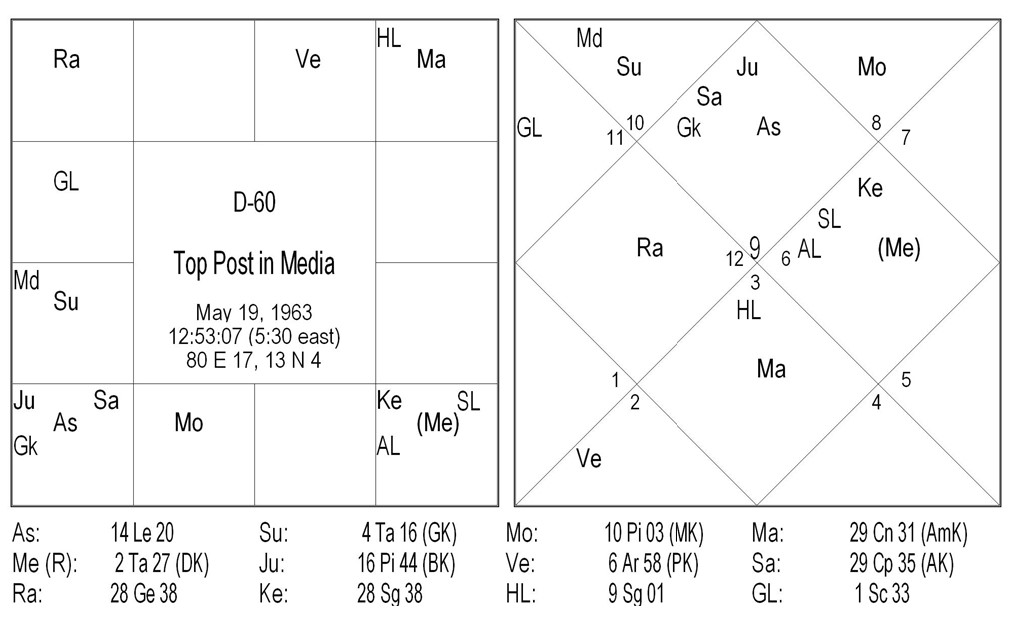 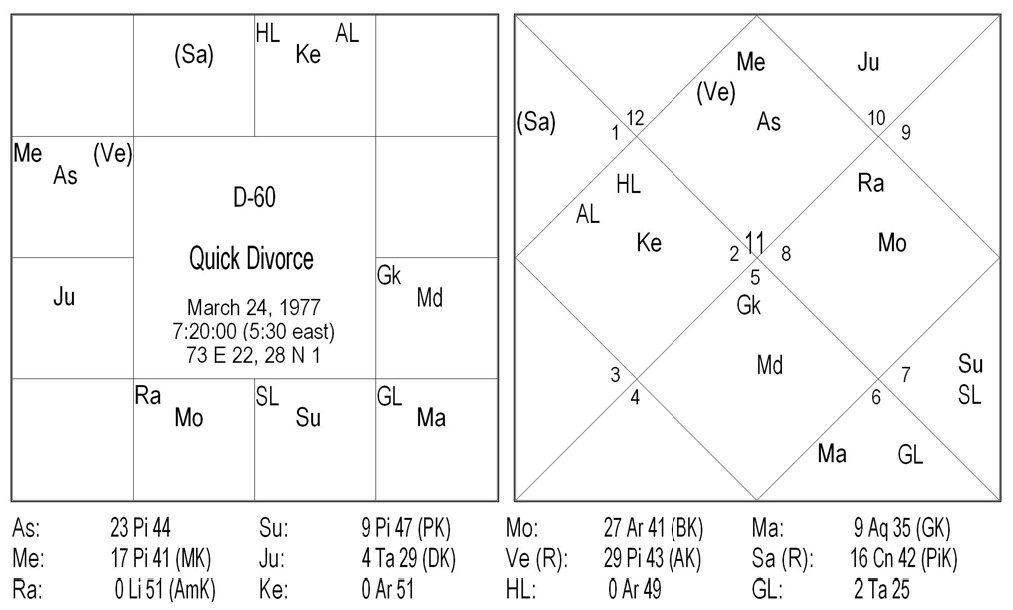 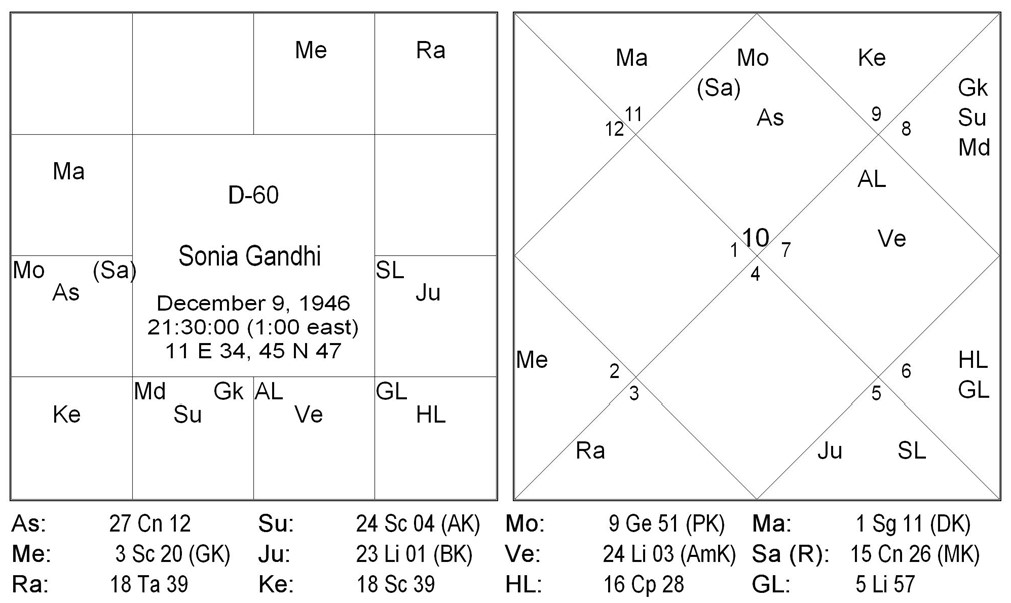 Event 1: Fatal Accident in Film shooting that moved millions to pray for him as he was fighting death – July 1982 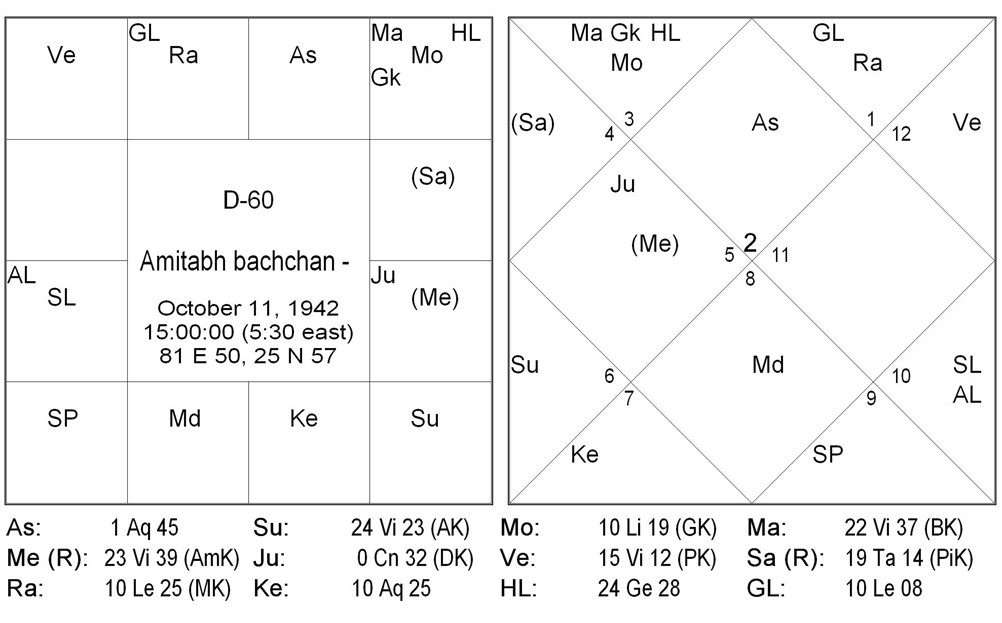 The usual mistake by astro enthusiasts is that whenever we read a method in articles we apply it as the SOLE criteria, whereas the particular author might be trying to demonstrate the method to stand out the principles he is trying to explain. Another factor is to apply the above method to its fullest other factors of D60 have to be taken into account which deserve much wider space, for transits cannot be above dasas. Even if ones D60 lagna is not accurate we can apply this profitably with only seeing its position from the D60 Moon (without using SAV) and see some meaning to it & it becomes one More Tool in our arsenal of Tools when superfined with continuous usage of it.

As one old Master once said to scribe ‘Complex methods are just a state of the mind, an innocent (Jup) student of this science will understand it easily & profitably, whereas an advanced student might never’ is what this scribe ends this paper with as yet I have to understand what he said in its entirety. His parting short was ‘U have been given the highest Key for learning astrology in that statement Beta (son)’ ?

The credit of inspiring scribe to learn about D60 goes to 3 lines from Shri K.N.Rao in an email replied in Oct 04.