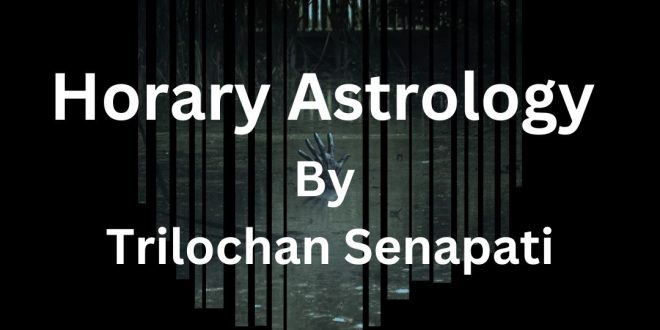 Horary astrology is a very interesting branch of the science which reveals to us the past, present and future from the Prasna chart cast for the time of query to the astrologer which is most useful in everyday life.  Persons with specific questions approach an astrologer and are anxious to know the answer within a very short time.  Confusions arise as to which specific time is to be taken into consideration and there is diversity of opinion.  But in fact, the proper time is the exact moment when the querent is anxious enough to know about a particular matter and expresses his thought to the astrologer.  If a letter is sent, the moment when the astrologer goes through the very question of the letter may be taken as the birth time of the question.

The proper time of the birth of an idea or a particular question depends upon the sympathetic relation of the human mind with the astral world.

It depends on the mental reaction to the condition prevailing in the universe, which exercises much influence on the destiny of a human being and is a decided and accepted truth.  Coming events cast their shadows in the mind of the querent and the manas (mind) being the cause, expresses itself by a question to know what is ahead.  As soon as the expression is given to the thought, that is accepted as the birth time of the question.

Solving a question in Horary Astrology and finding a solution thereto is as miraculous and interesting as observing the performance of the musician (SA Note: The word should have been magician) holding the magic wand before his audience.  By this one feels much curious to know as to how there is close relationship between the stars and the human life, like the force of gravitation vis-à-vis the various objects of the universe.   In horary astrology a thorough conception of the astrological science is essential.  It has been admitted by all that instructions laid down in reading Janma Kundali may be applied with success to the Prasna chart.  Very many methods have been laid down by Maharishis and eminent astrologers of the past in forecasting the horary questions and some of those important methods are discussed below.

The nature of a query may be determined by the position of the planets in the ascendant or by the full aspects of a planet in Lagna. In all questions the Moon is like the seed, Lagna is the flower and the Bhava representing the subject matter of the query, is the fruit of a tree.  The consideration of Lagna and its lord with that of particular Bhava and the lord of the Bhava are very important.  The connection of the lord of Lagna with the lord of Bhava in question indicates the prediction in the affirmative.

Now it has to be discussed as to how long it will take to achieve the goal when favourable result is predicted from Prasna Kundali.  Maharishi Parasara has indicated the time factor to the planets as follows:-

The time within which the prediction is expected to materialise is to be determined from the position of the strongest planet in Prasna chart.  If lord of the Bhava be retrograde, the event will take place only after it becomes direct.

In another method, the positions of Lagna, the Sun and the Moon in Prasna Kundali are to be determined for forecasting the actual result. The ascendant is the querent, the Sun is the Soul and the Moon is the mind.  Whatever one feels or thinks has got its bearing with the above three factors.   So under this system the above three factors are taken into consideration in solving horary questions.  After fixing Lagna and the two luminaries, it is to be examined as to which type of signs these three are placed, movable, fixed or dual.  By this system 27 types of charts are calculated, from which judgement can be predicted as per provisions of the Sastras.