Gripping of Planets By The Node -3 By Babubhai Yodh

Gripping of Planets By The Node -3

Two articles were published in previous issues of Saptarishis Astrology Volume-3 and Volume-4 on this topic. This is the third article in continuation of the same theory of Gripping of Planets by the Nodes. We may summarize the rules given in the previous articles as under:-

Vaghela Bhai as he is fondly called was born in 1941 has been studying astrology since more than 30 years with an avid rationalist approach. He gives more importance to Progressed theory with transit of planets & also Navamsa. A constant companion to Shri Babubhai Yodh he practices astrology with a zeal of leaving something for the younger generation. He was employed as a Mechanical Engineer with the State Government in Water Supply Dept & now his retired life is devoted to spreading astrology in Ahmadabad. He has been a great supporter of Saptarishis Astrology right from its inception days.

Now in this article, it will be explained that a planet may also be gripped by a Node even though the degree of a planet is more than degree of a Node. This happens in case of a retrograde planet only. This can be explained by applying theory of progression which is already clarified in previous article.

To understand the effect of this type of gripping of a retrograde planet by a Node, the following rules are given:-

Therefore, adverse result of a gripped planet when it is retrograde, is much more intensive and uncertain. It lasts for a longer period depending upon the motion of a planet and difference in degree between a planet and a Node at birth. In this position of planets, a native passes through not only adverse circumstances but also experiences unexpected events and incidents in the life.

For clarification of the above principle, the following birth charts are given:- 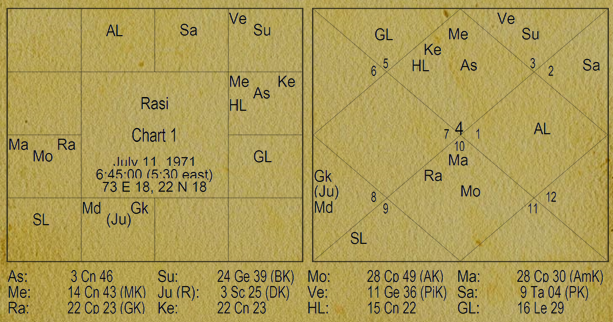 Mars is the owner of 5th & 10th house and placed in 7th house. Mars is also Karaka planet of energy, living force, enthusiasm & mental strength. Therefore Mars gives adverse result for the matter of 5th, 10th and 7th house. Native has experienced negative results for all the above matters.

5th house indicates education, luxury & comforts, love affair and children. Native experienced adverse result for these matters. Native could not study properly and did not get graduation degree. His father is a rich person, therefore native lived in a luxurious atmosphere but he misused his father’s money in unscrupulous company. Due to this type of company, native formed the habit of drinking at an early age. Native became a failure in his love affair and could not marry the girl with whom, he was in love. He got twin girls after marriage to another woman. Due to his problem of alcohol abuse, he had to stay away from children and therefore he was not able to get the love of his children.

Mars is placed in Seventh house and gives adverse result for the matter of marriage and relationship with other people. Native married in the year 1999 but it was a failure. Native could not maintain relation with his wife and she decided to give him divorce in the same year. Native could not maintain relationship in dealing with other people due to his strange behavior.

Mars is a Karaka planet of energy, living force, enthusiasm and mental strength. Native is lacking in all the above matters. Due to mental weakness, native has undue excitement and anger and therefore suffering from depression. To overcome this mental weakness and depression, native takes recourse to alcohol more and more and he becomes heavily addicted. As a result of this habit of overdrinking, complications are created in his life regarding the matter of fifth, tenth and seventh house.

After coming home, native again started drinking as usual. He continued his bad habits and behavior with his family members as before. Because of this, he was sent back to the same institution. This has happened twice but there is no improvement found in his habit till today. At present native is in the institution, so his parents and wife always remain in tension and are in grief.

In this chart, Mars is retrograde and during progression it becomes direct in motion on 9th September 1971 at the degree 18°-26’. During progression in direct motion Mars crosses degree of North Node at birth i.e. 22° 22’ on date 4th October 1971. There are 85 days upto 4th October 1971 counting from birth date 11th July 1971. Therefore considering 85 days equal to 85 years in the life of a native, the year will be 2056. This position and movement of Mars shows that adverse effect of gripped planet Mars will remain during his whole life.

In this chart, Mars and Jupiter both the planets may be gripped. But in case of Jupiter, it gets direct in motion from 26th April 1980 at the degree of 06°-40’. Therefore Jupiter is not crossing the degree of North Node i.e. 04°-25’ during its retrograde motion. So Jupiter is not coming under influence of gripped planet. We will explain here, the effect of gripped planet Mars only.

[1] Publisher: As per the author mars is retrograde but Kala Software shows that Mars becomes retrograde after 5 hrs at 12.00 noon exact. Even though this is a discrepancy but Mars will still behave like retrograde and the author’s assumption is valid. 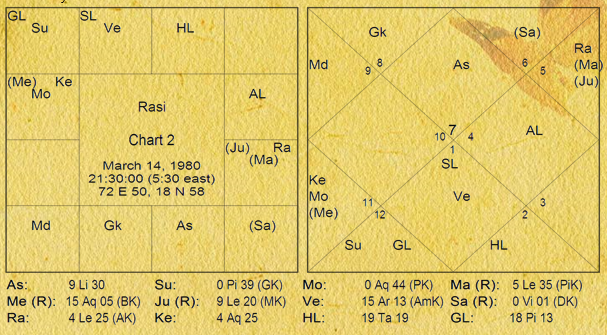 Mars is the owner of 2nd and 7th house, and placed in 11th house. Mars is also a Karaka planet of energy, living force, enthusiasm and mental strength as mentioned earlier. Therefore Mars gives the adverse result for the matter of 2nd, 7th and 11th house and for all Karaka matter of Mars. Native has experienced adverse results for all the matters mentioned above. At the time of birth, native was physically undeveloped, therefore, he was kept in Intensive Care Unit for some period after birth. During this period though he improved physically but remained mentally undeveloped. In this situation school education was not possible for him. His father was capable to educate him at home by private teacher. It took considerable time to study even preliminary education at home and he could not appear in any school examination. This education was not sufficient to be independent in earning. Therefore, native had to be dependent for his living. This particular factor was an impediment for his marriage also.

Second house indicate family and money. In the above circumstances, native could not marry. He has no independent activity and has to stay with his parent as he is also suffering from respiratory disease and physical weakness. Therefore, he could not have his own family and also no earning.

Seventh house indicates marriage and relation with other people. Native can not marry in the circumstance in which he is living. He is not developed physically. Mentally also he is handicapped. His activity is totally restricted by his physical and mental condition. Therefore there is no scope of any interaction with other people also.

11th house indicated gains, benefits & ambitions. Native has no activity. He remains at home and is taken care by his parent. Therefore, there is no gain, no benefit and no fulfillment of ambition in life.

Mars is the Karaka planet for energy, living, enthusiasm and mental strength. Native does not have any of the above quality in his life. He is suffering from meningitis, respiratory disease and not feeling physically fit.

After 1986, at the age of 6 years, native was not in a position to attend any school. His parents did not allow him to go outside the home as native was suffering from respiratory disease and forgetful nature. He is also feeling physical weakness. He had his education at home by private teachers but that was also very slow. In such circumstances, he does not have any job or service and marriage is also not possible. Native frequently gets sick and requires careful treatment. In the year June-2008 also, native was admitted to hospital and was in unconscious condition and unable to take any food. Though, it was a very serious condition, but anyhow he recovered after a month.

In this chart, Mars is retrograde and during progression it becomes direct in motion on date 6th April 1980 at the degree 02°-18’. Now during progression in direct motion, Mars crosses degree of North Node at birth i.e. 04°-25’ on date 25th April 1980. There are 42 days upto 25th April 1980 counting from birth date of a native 14th March 1980. Therefore considering 42 days equal to 42 years, this period is considered 42 years in life of a native according to progress theory. From this, it is seen that Mars will be free from gripping effect by North Node as soon as Mars during progression in direct motion crosses degree of a North Node at birth. At present native is running 29th years, so we think that native will get all the good benefits and good effect of Mars after 42 years of his life.

Progressed South Node has not crossed degree of Moon at birth till today and Moon is still in gripping effect. The effect of gripping Moon by South Node is observed that native has no education (5th house occupies by Moon) and also no career (10th house owned by Moon). In this case, progressed South Node crosses degree of Moon at birth, i.e. 00°-44’ on date of 22nd May 1980. There are 69 days upto 22nd May 1980 counting from birth date of a native 14th March 1980. Therefore considering 69 days equal to 69 years in life of a native, the year will be 2049. Gripping effect of Moon will continue till the year 2049 and therefore a native will experience adverse result of gripped Moon for a longer period in his life.

We have studied the gripping of planets by Node and its effect on life of a native in different ways. Still there are many situations in which gripping effect of a planet is experienced by a native when a planet is in evil aspect with Node. Intensity and period of evil effect depends on motion of a planet (fast or slow), type of motion (direct or retrograde) position of a planet (ahead or behind node) and difference in degree between planet and Node. For the interest of the reader, we may write in the same subject in future.