STHIRA DASA has been dealt by Dr.B.V.Raman in his studies in Jaimini Astrology. It is based on the method of the popular commentator, Neelakanta, who, we understand evinced more scholarship than practicable exposition throughout his commentary of the 1st and 2nd Adhyayas of the Jaimini Sutras. In this article I would like to attempt a practicable exposition of Sthira Dasa which may differ a little in perceiving Brahma in the nativities . The readers may try both the methods and find good results, since Sthira Dasa is one of the most valid and authentic Ayurdasas though not applicable in all the nativities except where Brahma is present. I am convinced of both the methods to be used if necessary to increase the chances of Brahma’s presence in the nativities though Neelakanta’s method does not sound logical in the rejection of Saturn’s eligibility for Brahmahood despite his eligibility for being Rudra and Maheswara.

• Mesha, Kataka, Thula and Makara get 7 years each.
• Vrishabha,Simha,Vrischika and Kumbha get 8 years each.
• Mithuna,Kanya,Dhanus and Meena get 9 years each.

This means that the Dasa periods are constant, unlike those of Chara,Trikona Dasas etc.

Pitru labha prani is the middle part of the entire sutra, with nine letters on both sides and acts a lamp on a threshold (Dehali deepika nyaya). From the sutra the following steps may be understood: –

Step 1: Find out the lords of the 6th,the 8th and the 12th houses of Janma Lagna or its 7th house whichever is stronger.

Step 2: How to know whether Janma Lagna or its 7th house is stronger.

Step 3: Ascertain the strongest of the 6th,the 8th and the 12th lords of Janma Lagna or its 7th house which ever is stronger. (a) Judge their strengths by exaltation etc. (b) If equally strong, judge by the degrees they possess. The planet getting the highest degrees is the strongest. (c) If by degrees they are equal in strength, ascertain by their natural strength, as mentioned above.

Timing of Fatality by Sthira Dasa:

The readers may refer to the sutras 30,31,32,33,34 in the 1st pada of the 2nd Adhyaya for a proper understanding of these principles. 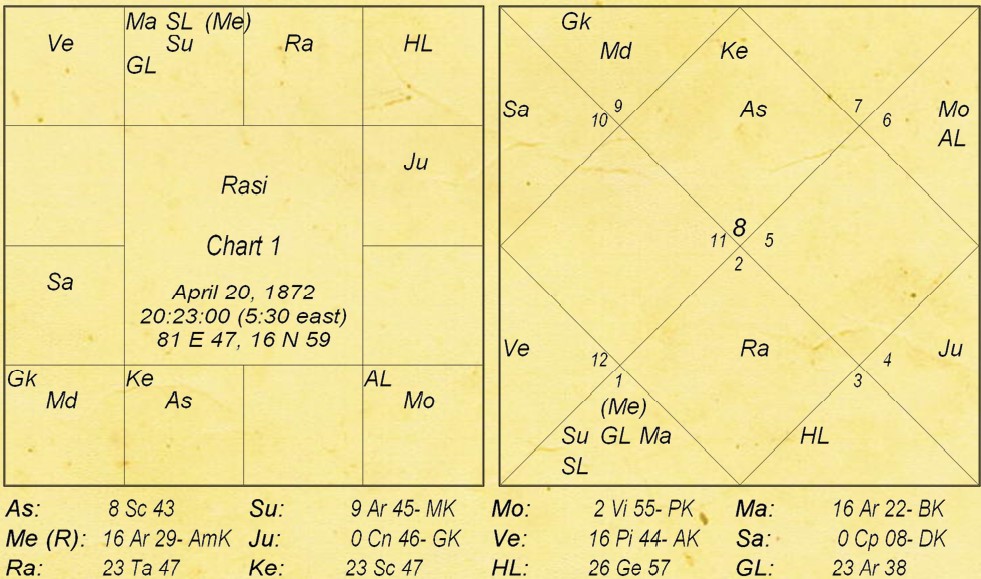 The Birth Ascendant being Vrischika, the 7th house is stronger than Janma Lagna because Venus, the lord of the 7thhouse is exalted, while Lagna lord, Mars , is in his Moola trikona house. The 6th,8th and 12th lords from the 7th house are respectively Venus, Jupiter and Mars. Jupiter is the strongest, because he is exalted and secures the highest degrees in the three. Jupiter is in the 3rd odd sign reckoned from the 7th house and hence Jupiter becomes Brahma. Sthira Dasa begins from Kataka occupied by Brahma and the Dasa signs are Kataka=7 ,Simha=8, Kanya=9 ,Thula=7,Vrischika=8,Dhanus=9,Makara=7,Kumbha=8,Meena=9. The native died  at the age of 63 in 1935 in the end of Kumbha sign. Kumbha is aspected by three malefics, Sun, Mars, Mercury . The 8th of Kumbha is occupied by the Moon (Principles 1 & 10). 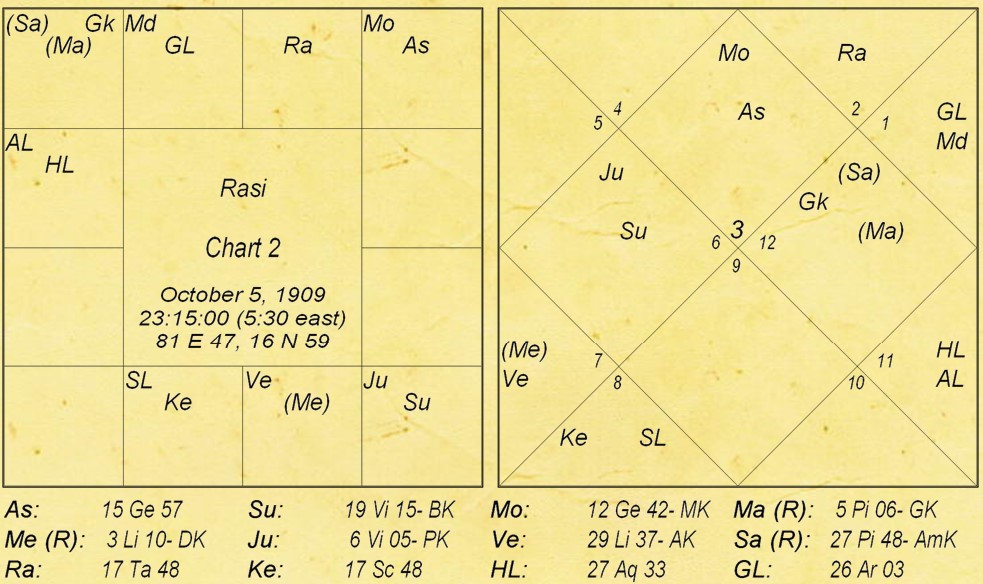 Copy Editor’s Note : This chart is as per the chart given in original article. We couldn’t regenerate this with JHora. 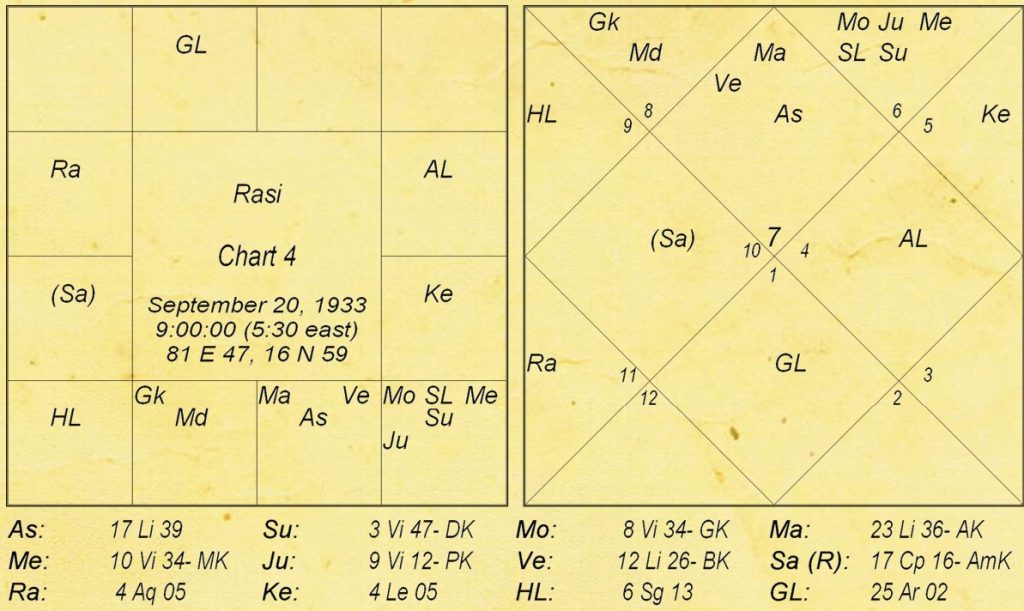 Janma Lagna Thula is stronger than its 7th house , because Thula is occupied by two planets while the 7th house is vacant. The 6th,8th ,12th lords from Janma Lagna are respectively Jupiter, Venus and Mercury. Venus only is in Janma Lagna, while Jupiter and Mercury being on the other side, 12th, are not considered. Venus becomes Brahma. According to Neelakanta, Venus also becomes Brahma because of placement in Thula, an odd sign. Sthira Dasa begins from Thula and the Dasa signs are Thula=7, Vrischika=8,Dhanus=9,Makara=7,Kumbha=8, Meena=9,Mesha=7,Vrishabha=8. 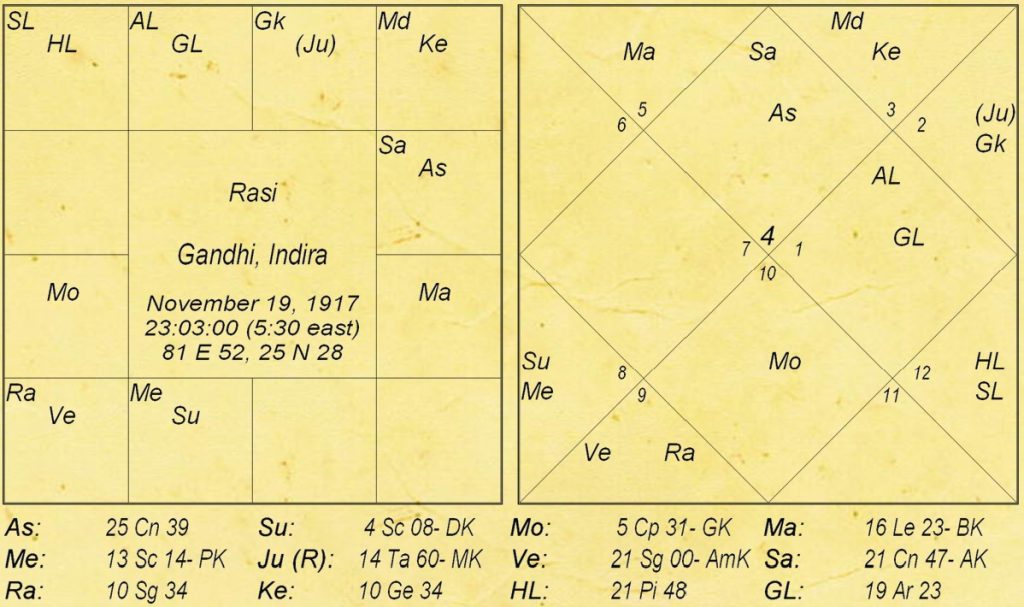 Janma Lagna is Kataka occupied by Saturn, while its 7th house is occupied by the Moon. Saturn is placed in his inimical house, while the Moon occupies his neutral house. Hence the 7th house is stronger than Janma Lagna. The 6th,8th and 12th lords from the 7th house are  respectively Mercury, the Sun and Jupiter. Jupiter is in the 5th odd sign from the 7th house of Janma Lagna. Hence Jupiter becomes Brahma. According to Neelakanta, Brahma is absent since Jupiter occupies Vrishabha, an even sign. Sthira Dasa begins from Vrishabha occupied by Brahma and Dasa signs are Vrishabha=8, Mithuna=9, Kataka=7, Simha=8, Kanya=9, Thula=7, Vrischika=8, Dhanus=9, Makara=7.

Janma Lagna is Kataka. The 6th,8th and 12th lords from Janma Lagna are Jupiter, Saturn and Mercury are Jupiter, Saturn and Mercury respectively. Jupiter is the strongest of the three and is placed in the 6th  sign from Janma Lagna, which is Dhanus , an odd sign. According to Neelakanta, Jupiter becomes Brahma. Sthira Dasa begins from Dhanus occupied by Brahma and the Dasa signs are   Dhanus=9, Makara=7, Kumbha=8, Meena=9, Mesha=7, Vrishabha=8, Mithuna=9, Kataka=7, Simha=8, Kanya=9 . Nehru died on 27-5-1964 in Kanya-Dhanus . Kanya is occupied by Mars and aspected by Rahu and Ketu(Principles 1,2) Kanya is the 10th sign from Brahma. (Principle 13). Dhanus is occupied by Brahma (Jupiter) and Ketu and aspected by Mars and Rahu(Principles 1,2). 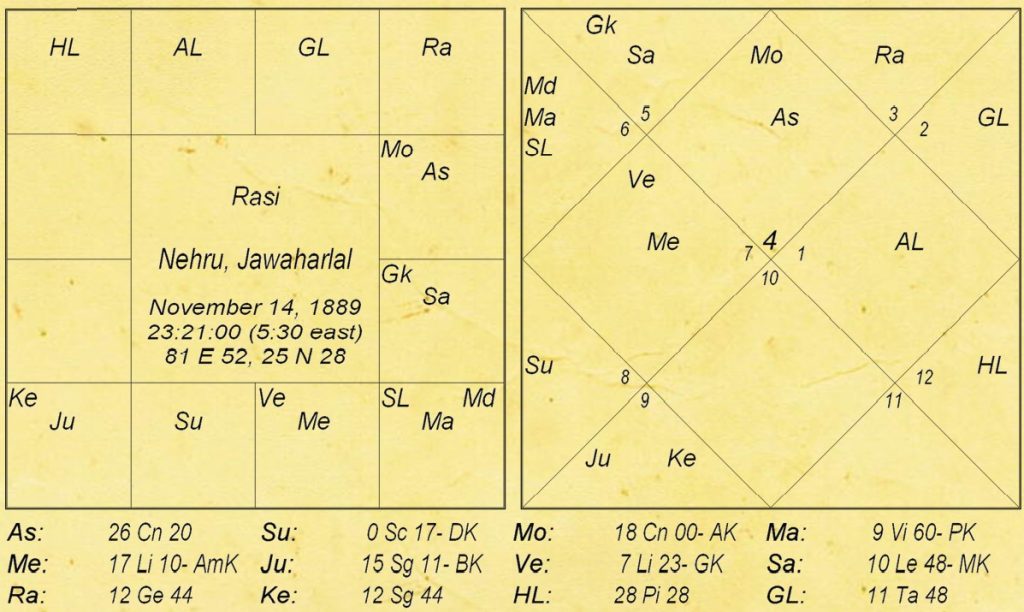 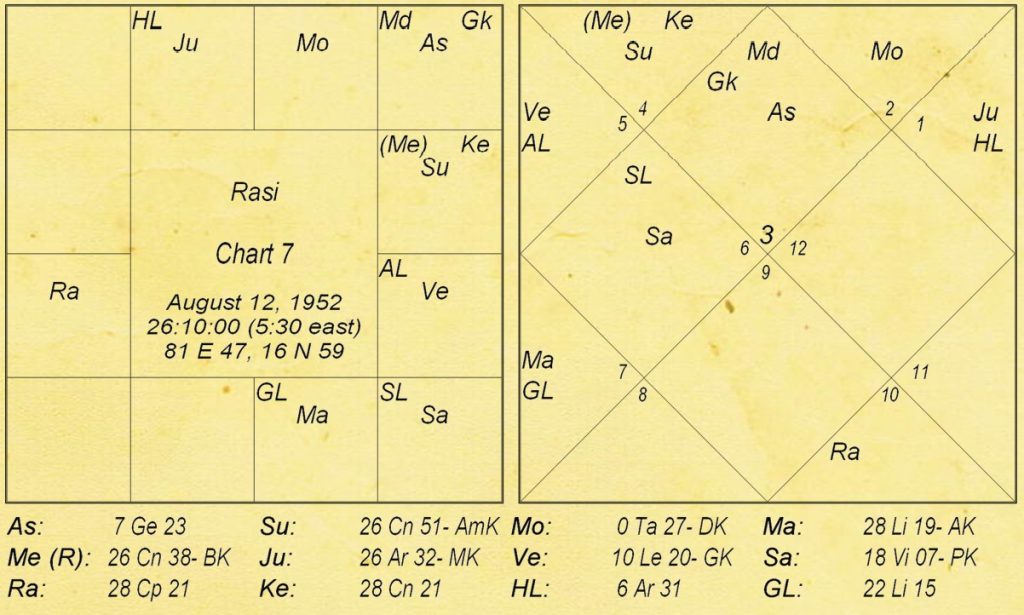 Janma Lagna is Mithuna . Both Janma Lagna and its 7th house are vacant Mercury, the lord of Janma Lagna , occupies Kataka, an inimical sign. Jupiter , the 7th lord , occupies Mesha, a friendly sign.  Hence the 7th house is strong than Janma Lagna. The 6th,8th and 12th lords from the 7th house are respectively Venus, Moon, Mars. Hence the Moon becomes Brahma, since he occupies Mesha, the 11th sign. Sthira Dasa begins from Mesha and the Dasa signs are Mesha=7,Vrishabha=8,Mithuna=9,Kataka=7,Simha=8. Death  happened in Simha Dasa according to the Principles 5,8. The native died on 25-6-1988 in Simha-Meena. Meena is aspected by Saturn.