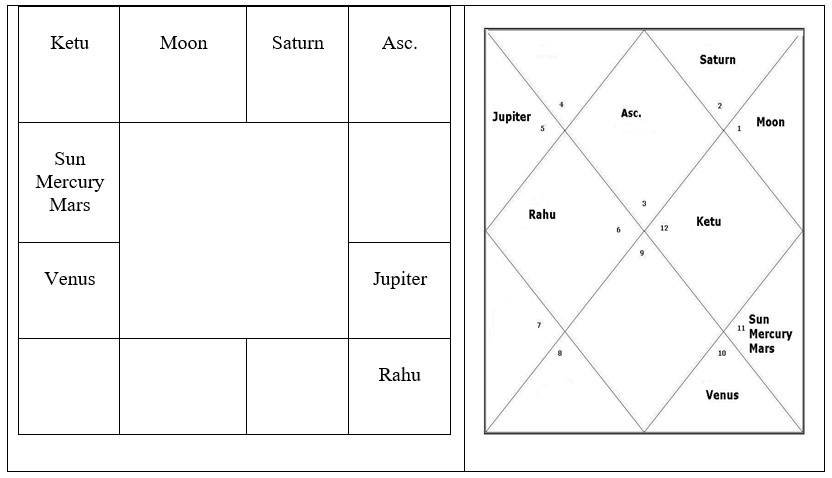 About the native and his place of birth

Rishi continues stating that, if Moon is in Aries, Saturn is in Taurus, Jupiter is in Leo, Sun, Mercury and Mars are placed in Aquarius, Venus is in Capricorn; Rahu is placed in Virgo and Ketu in Pisces…

And the Ascendant happens to be Gemini; the born child will be a male. His house of birth will be in a street running east to west and the main door will be facing south. In the northwest direction, there will be a temple for the Lord Shiva, who has on his matted hair the river Ganga and to the east is a temple of Vishnu who is worshipped by all.

A Ganesha temple in the north and east to that is a lane and in such a thatched house, the native will be born. We will tell the fortunes of the coborns who were with deficiencies, his father, his mother, and the sons he will get and also about his previous and next births.

About the Native’s father

We will tell about the characteristics of his father: He will be reddish in colour tinged with black colour.; will have a well proportioned body; He will be able to form an opinion or guess from the information that he has; will be offering food to those who approached him with hunger; will have devotion towards Vishnu; will have a confused mind; will protect the small people.

He will be able to differentiate between worthy and unworthy people; will have good conduct; will have no education; will have no ancestral property; will be of pure mind; will be without bad desires; will not be lazy while doing things; will get greatness and glory through Brahmins and saivites. (Saiva is one of the important religious sects in South India, which regards Siva with peculiar veneration).

He will accumulate more lands in some other village. He will be engaged in agriculture. His cattle wealth will also increase. We will tell about the coborns of the native. He will have one brother and six sisters and all of them will have long life. (Alternatively, we can even say that they will be with perfection).

About the native’s Uncle (Elder brother of native’s father)

We will tell about the elder brother of the native’s father. He will have reddish body; will have no education; will have the capacity to arrive at conclusions based on available information; will be without any deceit or cheating tricks; Will have a windy body; will not see the riches of his father; Because of an eminent saivite (Followers of Saivism or those who worship Lord Siva) his land holdings will increase.

He will have less education; He will increase his land holdings; Because of many good people, he will be famous in the country. Will say never to anybody; will be friendly to anybody; will support those who approached him with troubles.

Oh! Parvati! Listen: He will support his relations; will love his wife; will get trouble through his elder brother; will be a little short tempered. His cattle wealth will increase along with the increase of fertile lands. He will always be a happy and prosperous person.

Planetary position for the blemish of coborn

When rishi Parasara stated like this, rishi Agathiyar interrupted and asked: Tell me the full details for the statement made by you that the native will have no siblings because of the placement of Moon in Aries, the house of gains and Mars in ninth in Aquarius?

Oh! Mother, we will tell about the happenings in the life of the native in his previous birth. He was born in Vanniar community in a place east of Thiruvannamalai, and was living with wife and children. While for the livelihood, he was hunting the birds, an evil deed happened.

On the banks of the river in that village, there was a papal tree and under that tree, there was an idol of Ganesha and Snake. The native cut off the tree and because of that, a blemish came upon him. We will tell one more curse.

Blemish because of eating the birds

By laying traps, he caught various kinds of birds and was eating them. Because of that, an unparalleled blemish fell upon him. During his last days, he lost his wife and children, became lonely, and went to Srirangam. (A place near Tiruchirappalli wherein there is a temple for Lord Vishnu and the deity is called as Ranganatha)

He was spending his days by worshipping Lord Ranganatha at Srirangam by prostrating at his feet. He had a pure death at Srirangam. Oh! Mother! Since he died in auspicious place, in this birth he was born in Vishnu race.

We will tell about the previous birth of the native’s father. He was born in a big town to the east of a place called Dhavaleswaram in Muslim community; had wife and children and got wealth with his own efforts. While living like this, the rishi said that he would tell about the fate that came upon him.

On the roadside, in a choultry, a devotee of Vishnu lay dead without anybody around. Native’s father (in his previous birth) buried him with all the appropriate final rites. The benefits of that good deed were manifested in this birth in the life of the father’s native.

He was born in a shepherd’s family. In the previous birth without giving the due share to his relatives, he took all for himself. The relatives got vexed and said, “In your next birth, you will be without fertile lands…” (continued in next verse)

“And will live loosing your son” The said curse of his relatives continued in this birth also to the native’s father. In this birth, there will be loss of sons born and he will also be living in poverty.

Parvathi interrupted and asked: “In the beginning you said there will be poverty and thereafter comforts will come. Tell the justifiable results.” Rishi is replying: Placement of Jupiter in the third house and the aspect of Mars and Mercury on Jupiter will bring lands from southern side through a saivite who has done great penance.

The rishi continues with the next birth of the native’s father. He will be born in Kancheepuram in an Accountant’s family and will be working as an accountant. He will be living in the  goodness personified Lord Vishnu’s temple.

Marriage of the Native and Details about his wife

We will tell about the time of marriage of the native. Oh! Having half the shape of Lord Shiva! Oh! Chaste Woman! Listen: He will marry before the age of seventeen, a girl from the northern side hailing from his mother side relation.

We will tell about the characteristics of the wife of the native. She will have a proportioned body. She will have double colour. Teeth will be big; after he reaches her husband, she will have increased fortunes. Will not think of evil to anybody. Wife will be an angry woman.

We will tell about the siblings of the woman (native’s wife). She will have four brothers and one sister and all of them will have long life. If anybody is born after that, they will not stay. Listen Oh! Mother, she would be living in the northern direction.

Period of death of native’s parents

We will tell about the period of death of the native’s father. That will happen when the native is of 27 years of age. Four years after that his mother will pass away. At the age of seventy-three the native will die in the month of krittika (solar month – Vrischika equivalent to 15th November to 15th December) on a shukla Panchami thithi. (On the 5th day after Amavasya – i.e. the 5th day of the waxing period of the Moon).

Native’s next birth and details about current birth

Three more will be born but they will die. Oh! Woman! Now we will tell about the native’s deeds in this birth. From the day of his birth, there certainly will be prosperity. Devi! Before the age of 11, native’s paternal grandmother (father’s mother) will pass away.

Oh! Slim waisted Devi! Listen: until the age of thirty, he will run his family with his own efforts. Thereafter his family will be separated (from the parent’s). Thereafter, his fortunes will increase; will have many servants. Will live beautifully.

He will have reddish body; will be wealthy; will have educated knowledge; will be working as a charitable master; will have a courageous mind… Will construct a beautiful house.

He will be taking out a hidden treasure from the earth; will have will have growth of progeny; will live praised by the people in the world;  capable of talking precisely; will have a beautiful body like Kama (manmathan); Has plenty of cash; will not think of evil to anybody; will be a short man.

He will have a little stomach pain. Will be a man capable of coming to conclusions based on available information. Will conquer craftily those who did mischief. Will have two wives; Elder one was in a state of celibacy; the younger one will beget evils.