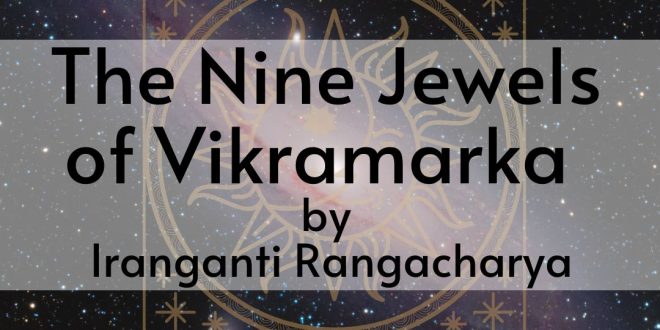 Two thousand years ago, Vikramarka ruled Bharat with the capital city of Ujjaini. , He is remembered even today, the most renowned of the great emperors, not merely by his conquest of several countries, hut by his magnificent wealth, nobility and literary servitude. He lies immortal in our Indian epic as a great protector and patron of lures and literature. That his royal court was resplendent with nine jewels who were writers, poets and scholars, was. revealed in Jyotirvidyahharana, a great astro – treatise of’ Kalidasa.

By the name, Dhanvantari ‘ one is most commonly apt to think of hint as a sage of Vedic period, produced by the churning of Milky Ocean. But Dhanvantari, the best physician-jewel of Vikramaditya’s royal court, was not his name but was his title.

Some may not hold the brief for this opinion, since he was only a poet as mentioned in the preface of Kasyapa Samhita.  But it was quite probable he was formerly a poet, but later he emerged as the outstanding physician, His works include- Vidya Prakasa Chikitsa, Vaidyaka Bhaskarodoya, Dhanvantari Nighantu, Roga Nidana and Chikitsa Sara Samgraha,

Two purposives of Dhanvantari are found implied in the naming of one of his works a ‘Vaidyaka Bhaskarodaya’:

Amara Simha had immortalized himself in his great treatise, ‘Nama Linganu Sasanam ” (glossary of Sanskrit words or Nighantu) more popularly known as Amara Kosa, like Bharavi to Kirtarjuneeyam, like Magha to Sisupala Vadha or like Murari to Anargha Raghavam.  According to Kavya Meemamsa, he had his education in Visala and he was awarded the title ‘Kavya Kara’.  It is hard to discern any clear clue from his immortal work, to which religion or caste he belongs, since he does not invoke his tutelary deity in his

benedictory sloka. He begins the hook with the synonym of Swarga and give us thirty-nine synonym of Vishnu, next to those of Buddha and Brahma. Even in the synonyms of Vishnu, several derivative synonyms of Krishna are found, but not one that pertain to Rama is given. A broad consensus in our country is he was a Bauddha belonging to Mahayana cult, for the simple fact he was a mastermind behind the construction project of Bauddha Mandir in Gaya.  The period of this temple construction goes to 422 Saka.   Kalidasa’s concept of Saka is from 550 B.C.  So, it comes to 128 B.C, (550 – 422). Several Nighantus like Medini, Viswa, Dhananjaya. Hora Vali, and Nanardha Ratnavali do exist, but no Nighantu has so many commentaries as Amarakosa has and Amarakosa

stands pre-eminent for all times.

In another sloka of Jyotirvidahharana, Sanku is found along with Vararuchi, Mani, Angadatta, Jishnu, Trilochana, Hari. Ghatakharpara and Amara Simha.  Hearsay evidence gained currency in our country about Sanku as follows.  Sabara Swamy, the author of Sabara Bhashya had four wives belonging to four principal castes. Varaha Mihira was born to the brahmin woman.   Bhatruhari and Vikramaditya were born to the Kshatriya woman. Harischandra and Sanku were horn to the. Vaisya woman.   Amara Siniha was born to the Sudra woman. Having had his early education from his father, Sabaraswamy, Sanku was ultimately mantravadi and an astronomer in the galaxy of the royal court. And perhaps Sanku, the popular astroinstrument is only known alter him.

Vetalabhatta otherwise known Bhetala associated with Vikramarka, was a great scholar and he authored “Pancha Vimsatika”. He is acquainted in the fables more as a .controller of spirit. He was a representative too of Kapalikas and Tantrikas.  Vikramarka was drawn on more by his good disposition and co-operative spirit than by his supernatural powers. He had his

honoured place in the royal court also because of Vikramarka’s expectancy of Bhetala’ s help, if the safety of his kingdom were endangered.

In certain parts of our country, Khaparde tribe belonging to the class of potters do exist even now.  This Khaparde tribe originated from the Ghatakharpara tribe of ancient times.  So, Ghatakharpara was a potter and became a poet of great repute.  His “Ghatakharpara Kavya” contains 22 slokas.  Here he claoims, he is matchless ocnerning use of anuprasa , Yamaka and verbal felicity.  But some ascribe the authorship of Ghata Kharpara Kavya to Kalidasa – and that is the ironic twist of Ghatakharpara’s claim.

Opinions differe about Mahakavi Kalidasa.  He is also known as Kavikula Guru Kalidasa.  Some think he was the contemporary of Chandra Gupta Vikaramaditya II and some hold he was the court poet of King Bhoja.  And some identified eight Kalidas’s of different eras.  But a fable about Kalidasa spreads over many years since, which is as follows:-

There was a princess by name Vidya who was too learned and proud to appreciate the erudition of court scholars.  Deeply affronted at her rudeness, the court scholars developed envy and malice against her.  To avenge her hauteur, they contrived a means of escape from her, such that she was per force wedded to an illiterate boor.  She otherwise being hapless pushed down her husband from the palace to get rid of him for good.  He broke his head and bleeded on the nearby lump of rice and intended offering to Kali Mata.  Instantly Kali Mata appeared and favoured him for a choice of three boons from her.  Blockhead as he was, he could not make head or tail of hwat she meant, but simple muttered about Vidya.  Kali Mata blessed him with 64 lores.  He became her devotee and became popular ‘Kalidasa’.   His work, Jyotirvidabharana, gives us to under he was one of nine jewels of the royal court of Vikramarka of the 1st century B.C.  Guru Govind Singh also writes in his book ‘Dasama Grandh’ that Kalidasa was the contemporary of Vikramarka and was the author of Raghuvamsa Mahakavyam, RAghuvamsa, Kumara sambhava, Megha Sandesa and RItu Samhara come under Kalidasa’s Sravya Kavyas.  His Drisya KAvyas are Shakuntala, Vikramorvaseeya and Malavikagnimira.  His other poetical works include Nalodaya, Dwatrimsat Pullalika nad Pushpabana Vilasa, Kalamrita and Jyotirvidabharana are his books on astrology.

Kalidasa’s expression, ‘Khyato Vttrmdui Mihiro ‘ bespeaks how Varaha Mihira was the most honoured of the court jewels of Vikramarka, Mihira, being his original name, predicted that the king’s son would be killed by a boar.  That startling prediction came true and thereafter he became popular with the epithet Varaha prefixed to Mihira. However, Varaha Mihira’s era is a conundrum to the historians and astronomers.

Varaha  himself mentioned he was the son of Aditya Dasa, a resident of Kapitthika village of Avanti (Ujjain).  Hence this statement precludes any controversy. He authored Pancha Siddhantika, Brihat Samhita, Brihat Jathaka, Laghu Jatakm, Brihat Vivaha Patala etc. Varaha made his name for Jyothisha, like Panini for Sanskrit grammar, like Manu for civil law (Dharma Sastra) and like Chanakya for politics (Raja Neeti).

According to Katha Saritsagar, Vara Ruchi’s name was Katyayana and he was deemed Pushpadanta-incarnate, the attendant of Lord Siva. In Prabandh Chintamani (a Jain treatise), Priyangu Manjari is spoken of as the daughter of Vikramarka and dear disciple of Vara Ruchi, And some could hazard a guess, she was Vidya who was wedded to Kalidasa. Vara Ruchi mentioned his name and name of his patron-king in the end of his book, Arya Chandobadh.  In his ‘Patrakaumidl ‘ also, he made clear that at the behest of Vikramarka, he wrote it. In fact, these nine jewels were not to amuse the king merely in his royal court, hut were the ministers of certain departments belonging to their fields of activities and talented scholarship.  Their portfolios were as follows:-

Previous The Evil of Ekargala In Marriage Muhurtha by Iranganti Rangacharya
Next Gripping of Planets By The Node -3 By Babubhai Yodh and B.D. Vaghela