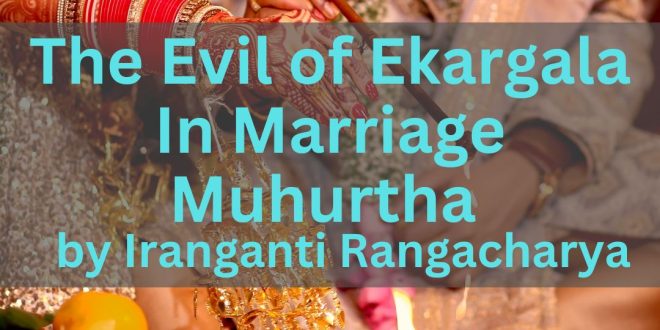 One of the limbs of Panchanga is Yoga which can score 32 points to any auspicious Muhurtha ( द्वात्रिशत् गुणितो योगः ).

The Ekargala when connected with any one of the 9 evil Yogas is considered a great evil. Hence it would be safer to see that the Muhurtha for marriage in particular is free from such a great evil as Ekargala.

The Lagna is Thula or Libra (for Rajahmundry latitude), the Yoga is Soola, the Sun is in Chitta 1 and the Moon in Dhanishta 1.

Counting from Chitta to Dhanishta, you get 11 (Including Abhijit) which is an odd number, Hence Ekargala is formed.

Each of the 9 evil Yogas is connected with a particular star as follows:

Draw a vertical line and on it draw 13 horizontal lines to get 27 in total. Write the connected star of the evil Yoga on the top and write the remaining 26 lines in the clock-wise or anti-clock wise direction. If the stars of the Sun and Moon are on the same line, Ekargala is forms (do not include Abhijit). In example 1, the evil Yoga is Soola. The star connected with it is Mrigasira. Now write Mrigasira on the top and remaining stars as shown below: 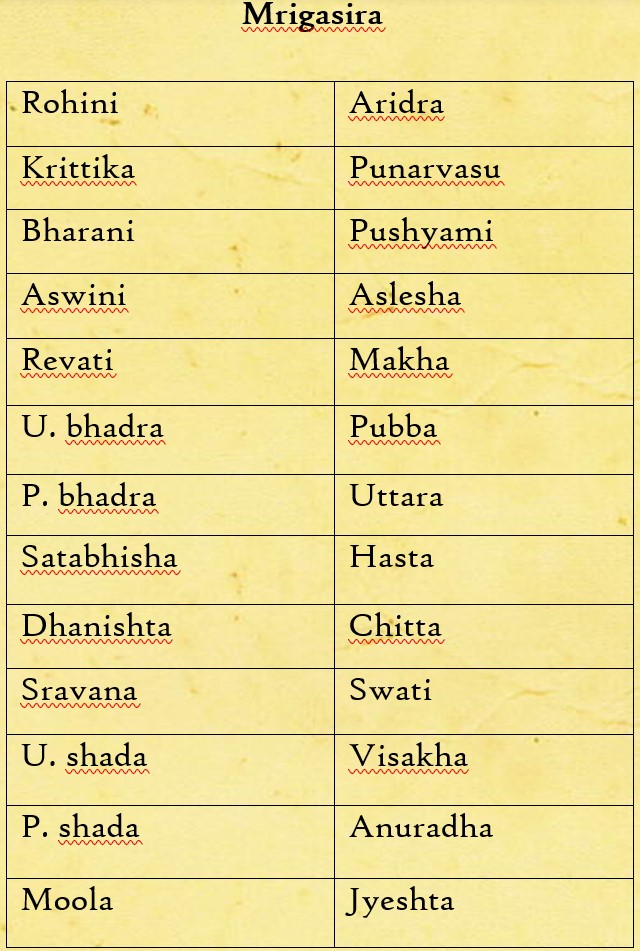 In example 1, the Sun is in Chitta, while the Moon is in Dhanishta. You find Chitta and Dhanishta are on the same line. Hence Ekargala is formed.

Sometimes, the two methods mentioned above may differ in the formation of Ekargala in which case (Method 2) may be taken as dependable since it has the Arsha Pramana of Vasishta and Narada and is dealt with in many texts like Poorvakalamitra etc. Kharjura and the Ekargala are not two different great evils as some may think, since Vasishta also calls Kharjura as Ekargala. According to these authors, though the stars of the Sun and the Moon lie on the same line in the Kharjura Chakra shown above, their mutual aspect is evil to Ekargala. Their mutual aspect would mean, according to Daivajna Vilasam, if the Padas of stars occupied by the Sun and the Moon are the same or 1 = 4 or 2 = 3. This condition is applicable to the Method (1) also, in Example 1, the Sun is in Chitta 1, while the Moon is in Dhanishta 2. So the Ekargala that is formed is not evil, because of the absence of the mutual aspect due to the 1st and 2nd Padas. Hence the Muhurtha is acceptable. Now let us take an example to show how the two methods differ in the formation of Ekargala.

The Lagna is Karkataka (Cancer), the Yoga Atiganda, the Sun is in Aridra 3, and the Moon is in Aswini 2.

By Method(1), we get 24 which is an even number when counted from Aridra to Aswini including the Abhijit. So Ekargala does not form.

By Method (2), the star connected with Atiganda is Anuradha. 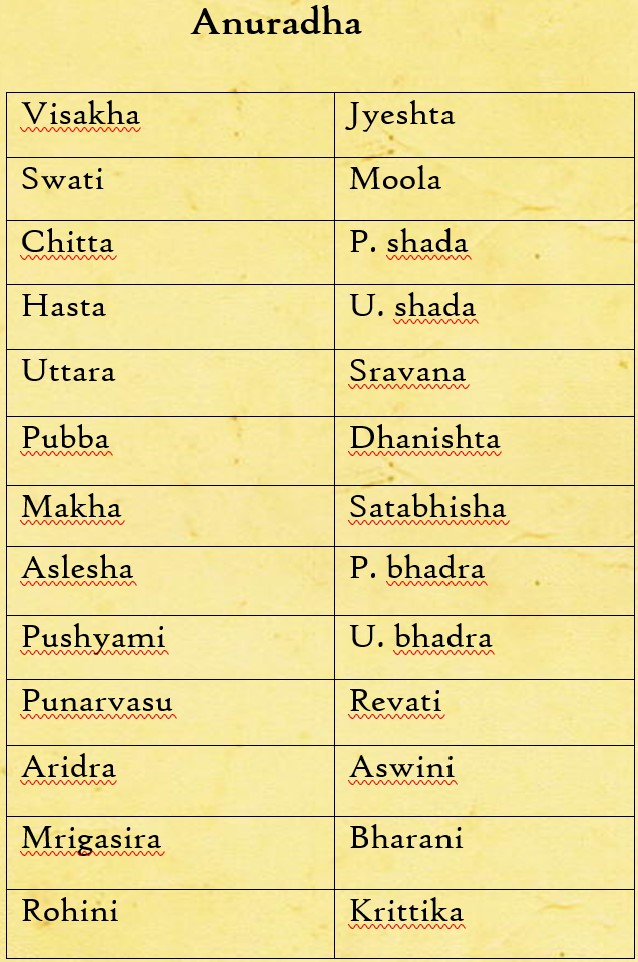 You will find above that Aridra and Aswini are on the same line. Since their Padas are the 2nd and 3rd, the Ekargala that forms is a great evil because of the mutual aspect. Hence the Muhurtha is not acceptable.

The Lagna is Vrischika (Scorpio), the Yoga is Vyaghata, the Sun is in Revati 4 and the Moon is in Chitta 1.

By the Methods (1) and (2) the Ekargala that forms is evil. But since the Moon is in the 11th from the Lagna, the Muhurtha is acceptable.