The relevant Jaimini aphorism of Trikona Dasa is:

which simply states that Trikona Dasa begins from Janma Lagna or the 5th house or the 9th house whichever is stronger. There is no divided opinion among the commentators with regard to the beginning of Trikona Dasa. Though pitru and matru, by Katapayadi pneumonics, connote birth ascendant (Janma Lagna) and the 5th house respectively, the word Dharma, by the same rule, does not give the numerical value of 9. Some commentators are therefore inclined to interpolate the word Dhama in the place of Dharma to convey the meaning of the 9th house.

To judge the strengths of the above mentioned three houses, please see Studies in Jaimini Astrology of Dr B.V RAMAN.

Some commentators opine that by the very name Trikona, Dasas run in the order 1, 5, 9 etc. Profound erudites, Dr. RAMAN, Dwivedi and Achutanarda Jha, while accepting this view, gave an example of a dual sign to begin with. It appears obvious that they are averse to apply the above mentioned order 1, 5, 9 in the case of cardinal and fixed signs also, since the order is contrary to the principles enunciated by the aphorisms (2, 4, 8, 9, and 10).

After noting down the 12 Dasa signs from the commencing dasa sign, preferably a dual sign, (if decided as the strongest of the three), Dasa periods which mean the number of years of each Dasa sign should be found out. The aphorisms immediately previous to Trikona aphorism are

The aphorisms mean that the count from Leo and Aquarius is reverse and the count from Taurus and Scorpio is direct. These two exceptions are deduced from the aphorism न क्वचित् (na kvacit). The general principles in respect of dual signs, viz., direct for odd signs and reverse for even signs, stand good. The above exceptions are also known from an obsolete Karika

As a result based on another obsolete Karika,

Dasa periods are to be found out based on the above classification. Judgement of dual lordships of Scorpio and Aquarius is also favoured by Dr Raman and others. Please see Studies in Jaimini Astrology for details.

Trikona Dasa begins from Janma Lagna (birth ascendant) or the 5th house or the 9th house whichever is stronger.

The combined concept of reckoning by odd or even and by cardinal, fixed or dual signs is impregnated in the aphorisms,

Raghavabhatta does not favour the consideration of dual lordships of Scorpio and Aquarius for Dasa periods, but recommends it for reckoning the 8th house in the context of longevity determination.

It should be noted that no Dasa sign gets more than 12 years, because of the word Viveka in the aphorism connected with Antardasa calculation, since Viveka meant 144, which when divided by 12 gives 12.

Neelakanta meant a different exposition of reckoning Trikona Dasa. Apropos, he quoted Vridhakarika which is as follows:

The above mentioned Vriddhakarika states that Trikona Dasa begins from birth ascendant or the 5th house or the 9th house, whichever is stronger. Neelakanta meant Chara Paryayavad as the count of Dasa periods by ‘Nadanta samah’, while Raghavabhatta meant it as another variety of Dasa called Chara Paryaya Dasa, different from Trikona Dasa.

Now let us understand from the Karika the reckoning of Trikona Dasa in male and female horoscopes.

Female horoscope: If the strongest of the birth ascendant (Janma Lagna), the 5th house and the 9th house is odd, take its sammukha sign which is even to begin Trikona Dasa. If the strongest is an even sign, take the same even sign to begin Trikona Dasa. In both the cases, since the commencing Dasa sign is even, Dasas run in the reverse order. Thus it comes to our understanding that Dasas run in the direct order in the case of male horoscope, while dasas run in the reverse order in the case of female horoscope from the commencing sammukha signs. The karika does not specify padakrama order (regular, every 6th and 1st, 5th, 9th) according as cardinal, fixed and dual signs respectively. But this order may have its sanction on the basis of the aphorisms No: 2,4,8,9,10.

Now what are the sammukha signs?

According to an obsolete Karika of Premnidhi Pandit, the 8th of a cardinal sign, the 6th of a fixed sign and the 7th of a dual sign are sammukha signs. If two are facing each other and thus looking at each other, the two are said to be sammukha or abhimukha aspects. Please see Table 1 for signs and sammukha signs according to the Karika. 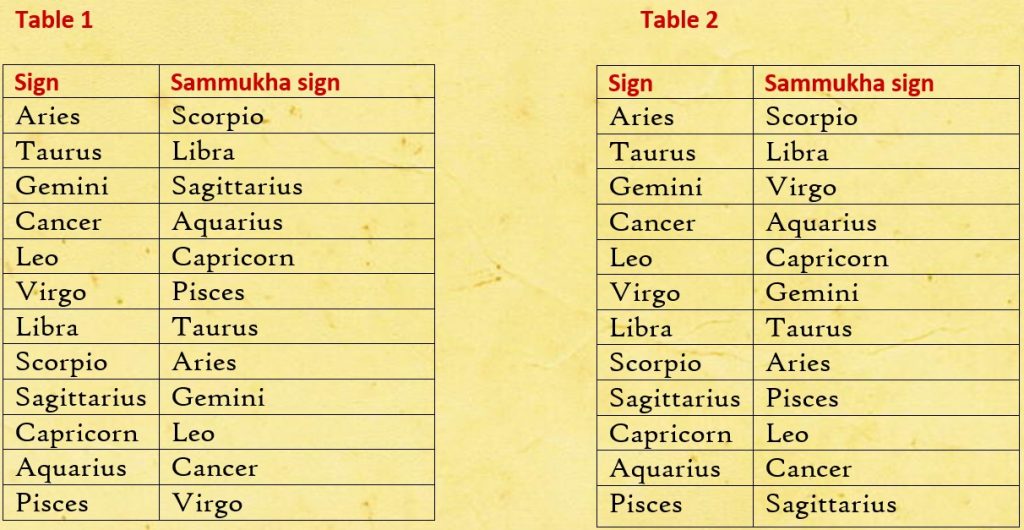 Neelakanta disagrees with the above design of sammukha signs and opines that Karika is quoted in the context of aspects. But most other commentators, while accepting the sammukha aspects of cardinal and fixed signs, differ in the case of dual signs.

Now see Table 2 of sammukha signs. From table 2, we come to know that a sammukha sign of a dual sign is the 4th counted direct for the odd and reverse for the even.

For clarity of understanding, I shall illustrate the three methods of Trikona Dasa with the following chart: 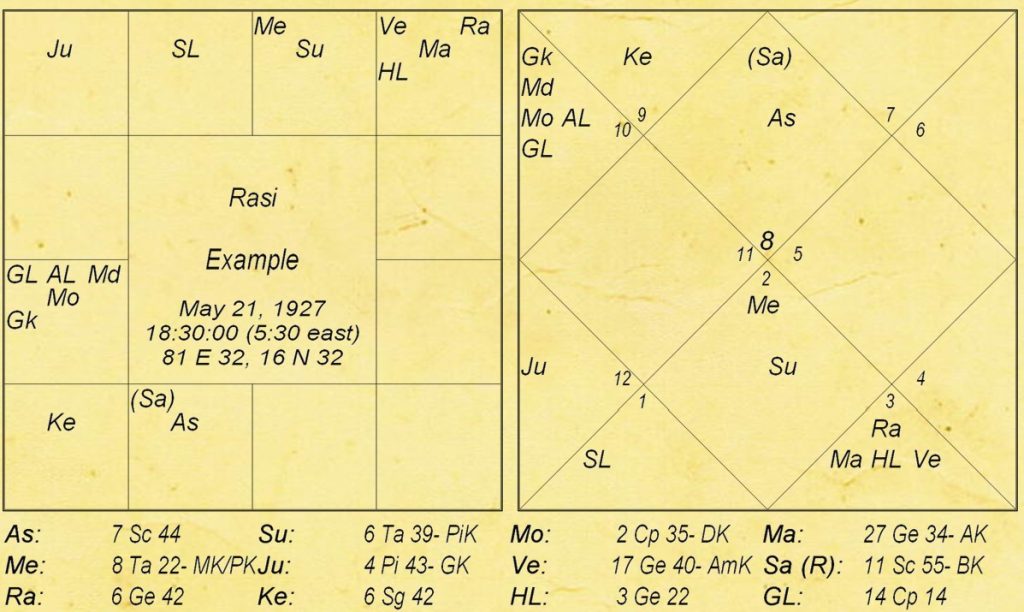 The strongest of Lagna, the 5th and the 9th houses, is the 5th Pisces, a dual sign occupied by Jupiter.

Predictive elements of Trikona Dasa need a separate article and hence I conclude for the present.