Although the stock markets in most countries around the world are quiet as I write this in late May 2009, watch out for a crash in late August of this year. It could begin in the middle of August, or it could be delayed till the second week of September, but around this time, a stock market crash—especially in the USA—is very likely.

The reason for this prediction is mainly the transits of Saturn. It will come exactly conjunct the USA’s natal Neptune on August 27, 2009, signaling the distinct possibility of the kind of crash we saw during the late summer and early autumn of 2008.

I have studied the astrology of stock market crashes in the USA going back to 1857.  What emerges from this study is that crashes are most likely when one of the outermost planets—especially Saturn—conjuncts either the USA’s Neptune or the USA’s Mars. The Moon and transiting Mars have often triggered crashes. In the natal chart for the USA, born on July 4, 1776, every time there has been a serious, sudden, breathtaking crash, the USA’s natal Mars-square-Neptune has been “hit” by transiting planets.

On September 29, 2008, when the Dow-Jones plunged 778 points (the biggest point drop in history but not the biggest percentage loss) a grand cross pattern was formed by transiting Saturn, Uranus and Pluto, conjunct, opposite and square the USA’s Mars-Neptune pair, as shown on

Chart #1.  The orb which included Pluto in a square to Saturn and Uranus was a little wide, but Pluto’s opposition to Uncle Sam’s natal Mars was within 8 degrees, and to the USA’s Neptune the orb was within 6 degrees.

People like to find reasons after the fact for such dramatic crashes as this. Alexander Twin, CNN/Money’s senior editor, said, “Stocks tumbled ahead of the (House of Representatives) vote and the selling accelerated on fears that Congress would not be able come up with a fix for nearly frozen credit markets. The frozen markets mean banks are hoarding cash, making it difficult for businesses and individuals to get much-needed loans.”

Astrological reasons are just as difficult to pinpoint, but usually coincide with the kind of mood prevalent at the time. In this case, the opposition between Saturn and Uranus had Congress hung on the horns of a dilemma. Should the members respond primarily to Uranus’ influence and innovate?  Or should they adhere to Saturn’s conservatism and preserve the status quo?

Historically, we often find instances when stock market crashes coincided with patterns such as this, when not all the transiting planets were within the 7-degree orb most astrologers deem effective, yet the “hit” to the USA’s Mars-Neptune square brought down stocks suddenly and dramatically. During most of 2008, the Saturn-Uranus opposition was tightening, with these planets flirting with being conjunct and opposite the USA’s Neptune, square the USA’s Mars, and stock markets were tumbling.

Given that these planets were moving slowly into position for most of 2008, why did stocks take their biggest hit on this date, September 29? Well, that day was a Monday and it followed a Lunation the day before, and that New Moon touched the USA’s natal Saturn.  It also marked the point when transiting Saturn came within a 7 degree orb of its conjunction with the USA’s Neptune.

On this day, too, the House of Representatives surprised investors by rejecting the Treasury Department’s proposed $700 billion bailout for banks. The bill passed later. Congressional delay, however, did not immediately stop the downward slide of stock markets, as Saturn and Uranus continued to tighten their opposition and harass the USA’s Mars-Neptune square. This opposition challenged the thinking of both those who were in favor of holding the status quo, and those who were for breaking new ground according to Uranus’ urging.

Governments around the world have done a bit of both: they have come to the rescue of errant financiers instead of allowing their institutions to collapse, and they have transferred unprecedented amounts of taxpayer money to the bankers. They have justified the unprecedented by saying these institutions are “too big to fail,” that if they failed, they would bring down the world financial system.

The bailout for financial institutions was supposed to go hand-in-hand with an economic stimulus package for the working classes, but much of this stimulus seems to be bogged down in red tape, causing widespread cynicism among the American population. It is hard to refute the popular perception that the government is now “of, for and by the super wealthy and big corporations” to an unprecedented degree.

There are some commentators who say that the politicians, by favoring their most generous campaign contributors, have only postponed the inevitable. I have written that the core of the existing, rocky banking system is the Federal Reserve, and that transiting Pluto’s position now threatens the Fed.

The planetary pattern upcoming in late August of this year is similar to the one we find in September of last year, with one big difference:  this time, transiting Mars will join Saturn, Uranus and Pluto to harry the USA’s Mars-Neptune square. The position of Mars in Gemini suggests that this upcoming period could see stocks plunge even more frighteningly than they did last September.

On the material level of our shared reality, there is no shortage of reasons why we can look for another big stock slide later this year. Primary among those reasons is that the Credit Default Swap game that seeded the crash of 2008 continues. Attempts have been, and continue to be made to control this form of unregulated insurance of securities based on various forms of debt “bundled” and sold to investors, with big financial institutions buying the lion’s share. In retrospect, it’s said that CDS’s were a market catastrophe waiting to happen. Since it has not been fixed, it now appears that another is waiting in the wings.

What governments around the world did following the crash of 2008 was take steps to save the existing financial system. But what the history of Saturn-Uranus oppositions tells us is that change is inevitable. Add the square to Pluto and what we can expect to unfold is the unexpected and definitely revolutionary.

Einstein’s famous definition of insanity—doing the same thing again and again and expecting different results—applies here. Stock markets are well known to be irrational.  The irony is that the big players, who are often able to move “normal” markets up or down, also get surprised by crashes brought on by “mysterious forces beyond human understanding,” i.e., planetary cycles and angles.

For most of the financial world, another crash like the one in 2008 would be horrible, wiping out the hope that we have, in 2009, put the worst behind us.  For those called Contrarians or Crisis Investors, a crash in late 2009 offers another opportunity, for such investors make more money faster during dramatic drops.

For astrologers such as myself who ponder the simultaneities of certain planetary and economic events, these coincidences are endlessly fascinating. We must keep in mind, however, that it’s a game that can never be won, only played. For while we can see our solar system as one gigantic celestial clock with 12 hands, we must not forget that no moment in celestial time repeats. As above, so below—it is wisely said that history repeats but does not rhyme.

So even as we check out the similarities between Chart #1 for the crash of 2008, and Chart #2 for the possibility of a repeat in 2009, we must keep in mind that Uranus is famous for surprises. Yet, with  Pluto’s square to both Saturn and Uranus tightening its orb and due to       become exact in 2010, I guesstimate that chances are better than 90% we’ll see another crash in late summer of 2009.

Please understand that I will be delighted if this prediction turns out to be wrong. 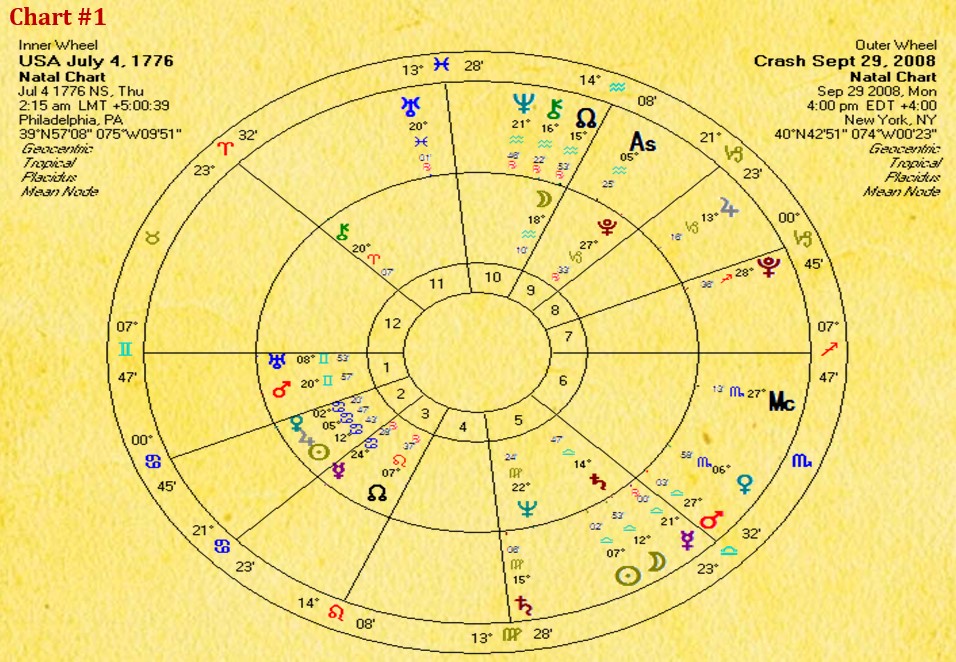 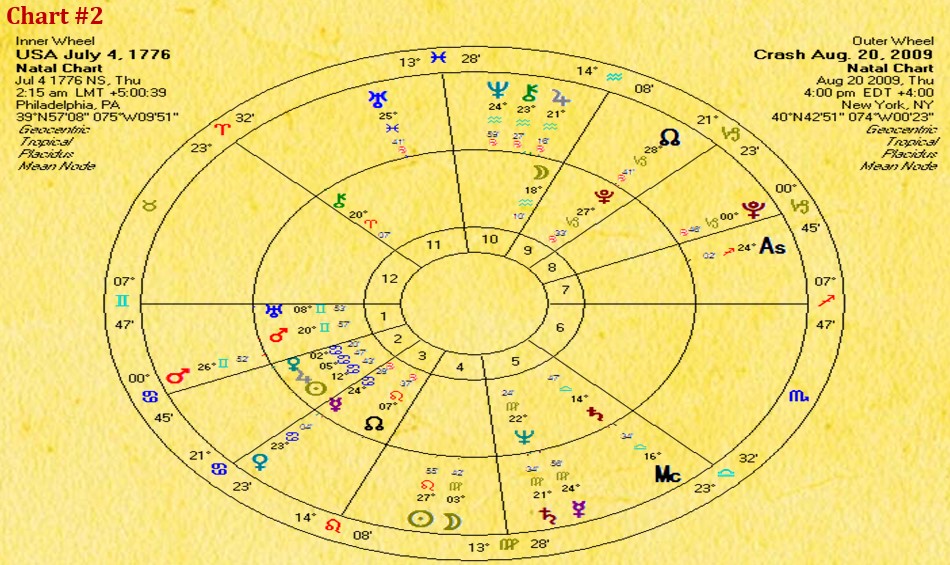 Previous The Inner Dimensions of Cosmic Rebirth by Joseph R. Giove
Next Aashlesha Nakshatra in Ravana Samhita By Veneet Kumar