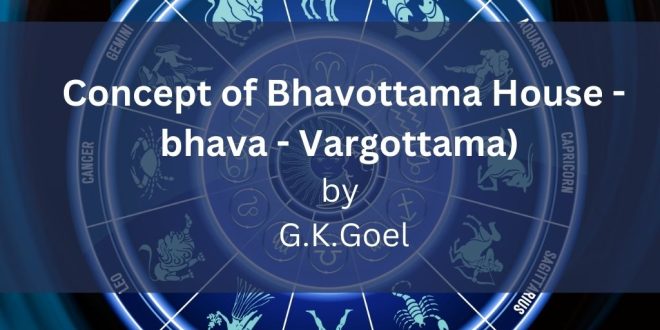 Prasana Marga annunciates following seven yogas, which lays down the basis of formation of yogas of all categories:

The dominant cause of the yoga created by the combination of planets, houses and signs or any two of them indicates the nature of results to be experienced. The strongest in bringing about yoga is called Yogakarta (composer of yoga) and it is this combination which gives the yoga results.

In the context of Vargottama last four yogas are most significant and are given in order of their merit and importance:

Planet(s) become both Bhava and Sign Vargottama and all the houses of two Vargas become Sign Vargottama.This gives strength to Lagna and it becomes auspecious.

In such a case, if Moon also becomes Lagna Vargottama.  This enhances the auspiciousness of the  nativity many fold.

The last yoga (d) is termed as “Bhavottama “ and  this is the topic of discussion of this article.

Mr. C.S.Patel has given the terminology of Vargottama planets on pages18 to 21 of his book“Navamsa in Astrology” after scanning various classics and Nadi granths. Mr. Patel says 0n page 20 of this book:

“Bhavottama means a planet in same house in Rasi and Navamsa charts. It enhances the good results of the house occupied. Research on this point is necessary”

It is suggested that the following classics, books and including articles of this scribe may be scanned for better understanding on this subject:

3 Varga Chakra – a SJC Publication –same publisher as above.

The Concepts of Vargottama/ Bhavottama are very important and powerful tool in predictive Astrology. This Concept had to be applied and adopted if method of judgment of the nativity is based on divisional charts.

The predictive astrology is based on three main pillars, namely,

Maharishi Parasara has precisely explained this concept to his disciple Maitraye in chapter 3, slokas 4, 5 and 6 of BPHS:

“Those, celestial bodies are called the planets (Grahas) that move through the Nakshatras (or asterisms) along the Zodiac (Bhachakra). The Zodiac comprises of 27 asterisms from Aswin to Revati and also devided in 12 equal parts known as signs (Rashis) from Aries to Pisces. The Zodiac sign which contains the rising (ascending) point at the time of Birth is called Lagna (ascendant)”. Based on the ascendant and the planets joining and separating from each other, the native’s good and bad fortune is deducted”.

Parasara has given the concept of Bhavas (houses) along with 12 signs in the above narration. This is called the compartmental system of houses. In this, system the whole sign in which the degree of ascendant falls is considered the first house and subsequent sign as 2nd house and so on. The longitude of the ascending point becomes the most sensitive points of the ascendant i.e.1st house, and the sensitive points of other house will be 30° apart. The sensitive point of 10th house will fall in 10th sign from ascending sign and will have the same longitude as that of the ascending point in Lagna. In this system M.C. is not considered as the Mid-point or cusp of 10th house. M.C. is however given prime-importance due to it and is widely used for many other important purposes.

The above mentioned Hindu (Vedic) Method, advocated by Sage Parasara, seems to be more rational and worthy of being followed in all astrological calculations particularly in the casting of a nativity. This method has universal applicability. In this system either the longitudinal duration or mid-point / cuspal degree of houses does not get distorted at higher latitudes.

This Ayanamsa value could be obtained by deducting 57 secs from the value of Lahiri’s Ayanamsa for a period of 1950 -2050.

However, savants may adopt true or mean Rahu according to their experience.

say in 8th house. The planets’ placement even in 8H WILL NOT CREATE HINDRANCE IN MARRIAGE.

THE following basic principles should be noted for handling D-charts.

– Any incident, such as marriage, joining service, birth of child – If dasa lord is placed in bad houses in concerned D-chart, may not end in happiness.

-Accession, victory in election – should be judged from D-11.

-UCHA  with Neecha or any planet with his enemy – not good.

-Planet placed in 8th of D-chart does not harm if aspected by Jupiter.

-In the case of house wife- D-9 should be studied.

-Yoga karaka planet of D-1 chart, will give some good effects even if debilitation in other D- charts provided placed in a good house.

-OUT of all powerful positions, the most important are 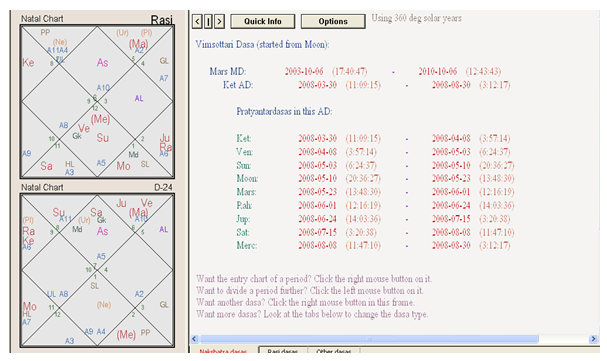 Mars and Ketu are Bhavottama and occupying 12H and 3H RESPECTIVELY BOTH IN D-1 and D-24 charts. The native is presently employed in a lucrative job in south India and

Mars and Ketu are not directly connected with education in both charts, except that these Planets are Bhavottama. Both the planets are also acting as ‘YOGAKARTA’ as they are being aspected by other planets in D-1 and D-24 charts. 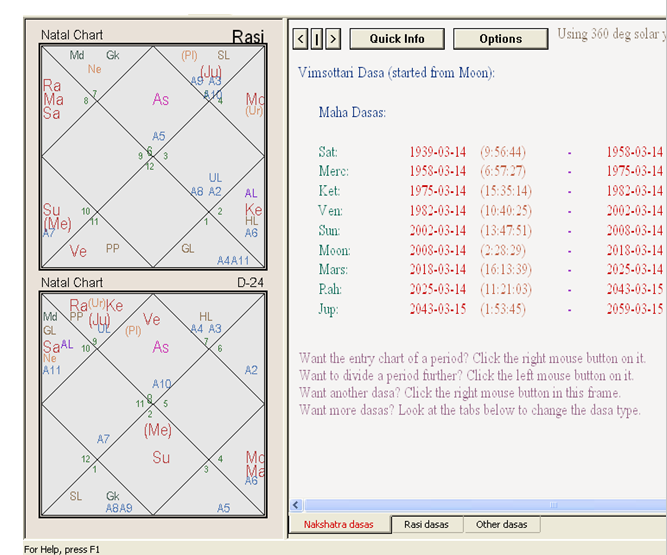 Saturn is BHAVOTTAMA in D-1 and D-24 charts and is conjunct or aspected by many planets ,thus becomes ‘YOGAKARTA’ for education.

Ketu /Saturn –He has taken admission in management course of IIT Delhi.

He had successfully passed all examinations with merit. Saturn is ‘YOGAKARTA’ in this nativity for education as it is aspected as well as associated  with several planets in both charts. 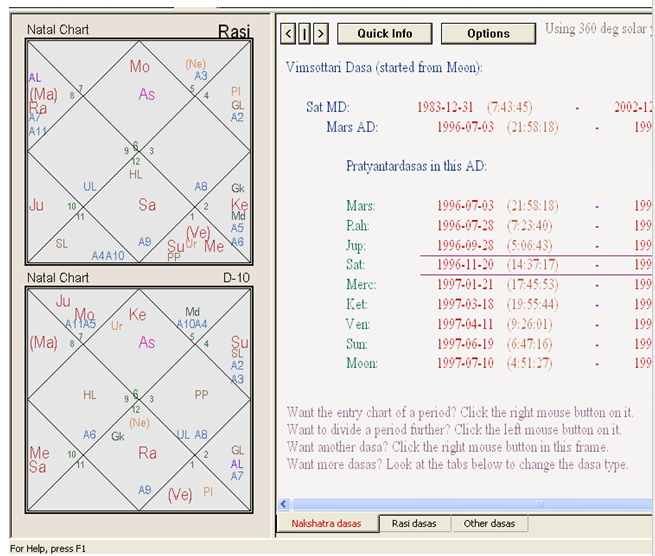 D-10 chart is sign Vargottama and ascending sign is occupied  by Ketu.Thus Ketu becomes initiator for carrier matters. Mars and Venus though placed in 3h and 8h respectively , are Vargottama as well as bhavottama as such are strong indicator as well as ‘yogakarta ‘ for profession.

The native started his carrier in Rahu /Ketu period.

Rahu/Venus – Venus is both house and sign Vargottama- His services were confirmed in this period.

Venus and Mars are placed in 8th and 3rd houses respectively and are in Bhavottama in D-10 chart. The native did not have any problem in his carrier in the dasa of these planets.

Saturn/Mars-This period was running from July3, 1996 to Aug13, 1997, and was coinciding with the retirement age of the native. Saturn was also transiting over natal Saturn. At that time.inspite of all these factors, the native was absorbed on contract and continued on same post till the end of September 1997.

The main reason was that Mars, the sub-dasa lord, was in Bhavottama.

Now compare D-1 and D-3 charts of this native: 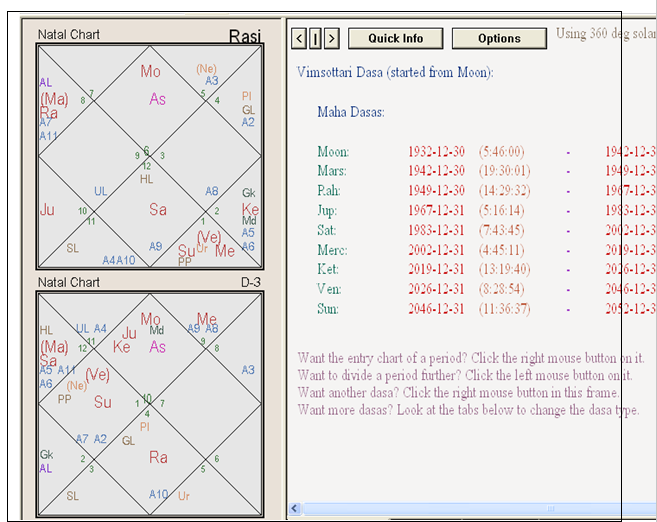 Moon and Mars are Bhavottama in D-1 andD-3 Charts and acting as ‘YOGAKARTA’ for co-born.

These planets are associated with several planets in both charts

The native was blessed with 5 sisters and two brothers in  major dasa of these two planets. Mars major period ended on Dec30, 1949 and his youngest brother was born on July7. 1949. 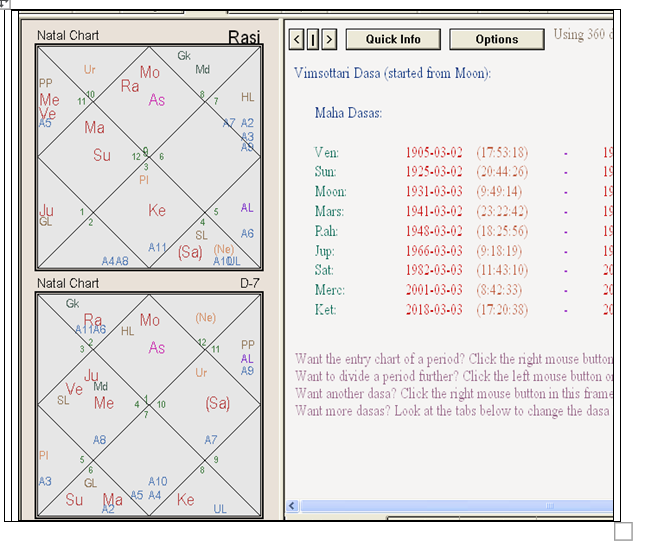 Moon is Bhavottama in D-1 and D-7 charts. Moon also becomes ‘YOGAKARTA’ for progeny as Moon is with Rahu and aspected by Mars, Sun, Ketu andJupiter in D-1 chart ; and Mars and Ketu in D-7 chart. Moon is getting Argala from Rahu (2H) and from Mercury, Venus and Jupiter (4H). D-7 Lagna lord is also getting Argala (11H) from these three planets in D-7 chart .Moon thus becomes key planet in this nativity to give progeny along with Mars (though Combust) and Rahu.

In the major periods of Moon ,Mars and Rahu ,the native was blessed with 3 sons and six daughter ( eldest daughter was born on Sep2,1935 and youngest Son was born on July 7, 1949) All the offspring’s are alive except eldest daughter who expired on March31,2006 after crossing the age of 70 years. 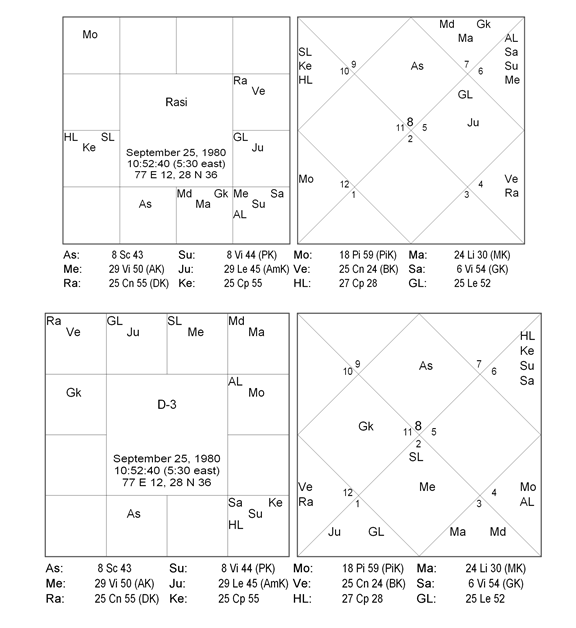 Marriage of the Sister

The couple was married on 27.11.2005. The husband was running Rahu major period. Rahu is placed in 8th house in Navamsa chart but is Bhavottama and Vargottam. The wife was running Ketu dasa. Ketu is placed in 6th house, but in Vargottama. 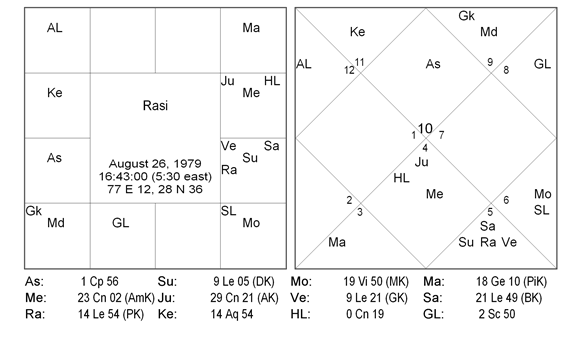 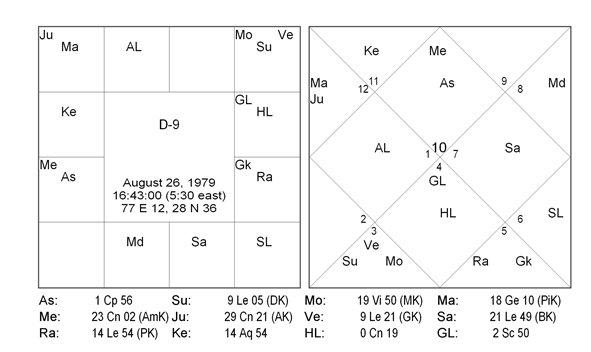 The native was married on 27.11.2005 in Rahu/Moon/Venus directional period though Rahu is placed in 8th house in D-9 cart. Besides Rahu which is Vargottama, Moon is the lord of Seventh house and conjunct with Dara Karka SUN and Venus in D-9 chart. 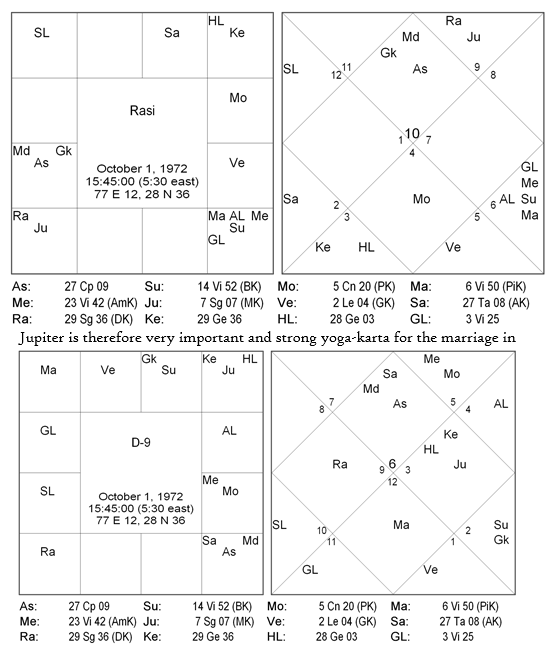 There are following interesting features in this nativity. 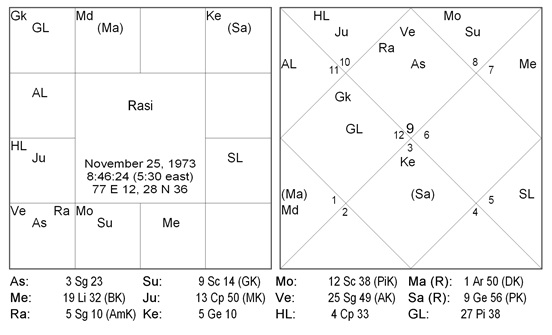 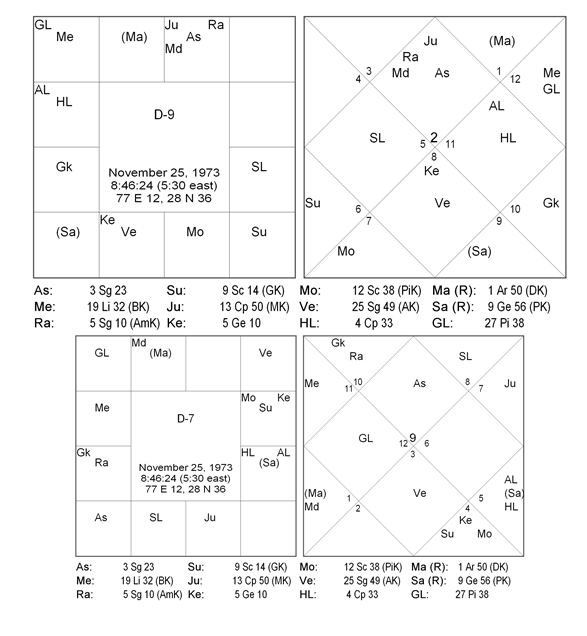 This is an interesting nativity which depicts the role of Vargottama placements:

However, the following features in this nativity are worth noticing.

The native was married on 29.1.2001 in Ketu/Jupiter/Venus period. Ketu is in Bhava Vargottama and in association with Jupiter and Venus which are ascendant lords of D-1andD-9 charts respectively. Besides other influences, Bhava Vargottama Ketu plays the key-role in arranging marriage.

As soon as, Venus dasa commenced after 24-8-2003, both partners separated from each other and wife returned to her parental home with the child.

It may be noted that no sooner Vargottama Ketu dasa was over; the marriage could not sustain on account of other evil Yogas and also resulted in the separation from the progeny.

Previous Fixed Stars – as above, so below By M. Imran
Next Egyptian Astrologer Rhetorius & Rare Combinations By M. Imran