This article will show how to use the Jaimini Chara Dasas as a predictive tool.

The Chara dasa system of prediction is a general use Mahadasa, similar in its flexibility to the Vimshottari dasa system that works very well for most predictive patterns. The next section will provided a brief recap of the way in which this system is set up, based on principles taught by K.N. Rao on his trips to the United States in the mid-1990’s.

A Brief Overview Of Jaimini Astrology

Jaimini is predominantly practiced in the Andhra Pradesh area of India, but its governing principles are also discussed in detail in the encyclopedic compendium of astrological techniques, the Brihat Parasara Hora Sastra. The BPHS has enough material in it to keep most of us studying Jyotisha busy for several life times. The Jaimini factors are not referred to specifically as Jaimini indicators. However, when one reads P. S. Sastri’s translation of the Jaimini Sutras, or either of Mr. Rao’s texts on Jaimini Astrology, one realizes that these principles are, in fact Jaimini principles. There are other Jaimini texts which have emerged over the years (including The Jaimini Upadesa Sutras written by Sanjay Rath, Jaimini Sutramitrum by Iranganti Rangacharya and a recent translation in process by Ernst Wilhelm of the United States).

However, Mr. Rao’s texts go the furthest in explaining how the Jaimini dasa systems work, and are still, in my opinion, the clearest exposition of Jaimini principles available in the West.

The following are the major differences between Jaimini and “standard” Parasara astrology:

The calculation of the Chara dasas is done as follows:

The next thing to look at is how to ascertain the direction of the mahadasas. The pattern of the dasa sequences is as follows:

To determine the length of the maha dasas indicated above, look at the placement of the ruler of the signs, and count from the sign in question either forwards or backwards, as cited below. If a planet is in its own sign, it is assigned twelve years.

The number which results from the counting (including the sign from which the counting starts) is then to subtract 1 from the total. This will give the mahadasa in years.

The following examples will illustrate some of these principles.

Suppose an individual has a Taurus rising sign, with Venus in the fourth house. This makes his first mahadasa Taurus, and it will last for three years (4-1). He has Mars in the twelfth house in Aries; his next mahadasa (Aries) will last for twelve (12) years. Let us assume he has the Planet Jupiter in the third house in Cancer; the next mahadasa (Pisces) will (counting backwards) last for 8 (9-1) years.

Let us now consider the Aquarius mahadasa; this uses the principle that the planet with the higher number of companion planets will be chosen to be the sign to which counting will be done. In our hypothetical example chart, the Rahu is in the same sign (Cancer) with the Sun, Mercury and Jupiter. Saturn is in the same sign with the Moon (in Taurus).

The choice of Rahu as the sign to which one would count to get the mahadasa length is obvious according to the principle already stated. The Aquarius mahadasa (which we count backwards to get), gives us an Aquarius mahadasa of seven (8-1) years.

Jaimini astrology uses a variety of special yogas or combinations which do not exist in other types of Jyotish. The two most unusual (but, in their own way, very logical) are the special combinations which have to do with Saturn and Venus. Venus, in combination with, aspected by or aspecting the Moon, produces a special auspicious combination in Jaimini which manifests during the mahadasa of one of the signs in which the planet sits. (Remember the special aspects which are unique to Jaimini)

Likewise, there is a special combination in Jaimini astrology which makes use of Saturn. In standard Parasara astrology, the planet Saturn is often interpreted as a bringer of hardship, but in the tenth house or when casting an aspect on the Moon, Saturn produces a phenomenal rise to power or intense charisma, respectively.

Likewise, there is a really positive influence when Saturn aspects the Karakamsa sign in the Rasi (natal birth chart). The Karakamsa sign is the sign in which the Atmakaraka planet sits in the Navamsa chart, transferred to the natal chart.

Finally, Upagrahas are a very valuable predictive tool that can be used for enhancing interpretation of Jaimini Chara Dasas.

Let’s look at a chart: 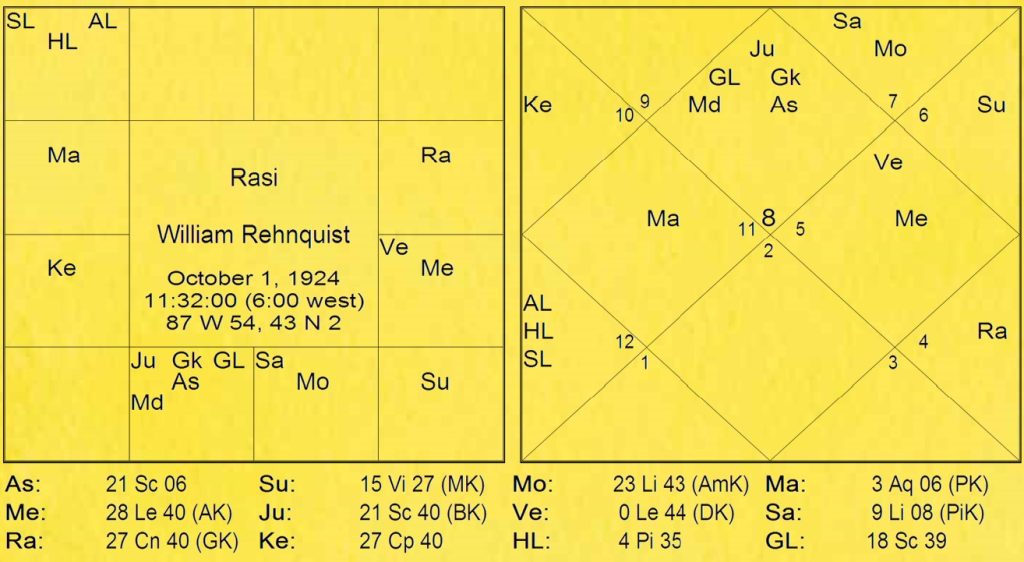 Rehnquist has had several major achievements in his life, starting in 1952 when he was Class Valedictorian of his graduating class at Stanford Law School.

He was in private practice in Arizona from 1953-1969, serving as legal advisor for Barry Goldwater’s presidential campaign in 1964.

He served as Assistant Attorney General of the United States from 1969-1971 under President Richard Nixon.

On December 10, 1971, he was confirmed as an Associate Justice on the United States Supreme Court and in 1986 he became Chief Justice of the Supreme Court.

In 1999, he presided over the impeachment trial of then President William Jefferson Clinton.

Let’s look at his Chara dasas for these events:

Cancer mahadasa is the natural ninth house mahadasa. Cancer is aspected by Jupiter, his Bhatri (indicator of teacher) planet and Mars (his Gnati or hard work planet); Rahu in the ninth house alone gives great status in life, and its lord Moon (his career indicator planet aspected by Saturn, his Putri Karaka or luck indicator planet). So the ruler of the sign will still have some say in Jaimini astrology and you will see that the karakas work together to support the ruler of the sign. This period, although a period of effort (gnati karaka) and ambition (Bhatri Karaka) would have brought honor (Putri and Amatya Karakas) during its dasa. So, valedictorian and clerking for a Supreme Court justice is a very impressive career start. Cancer is also his 3rd, 5th and 11th arudha, indicating very good luck

Although he was active during his Gemini and Taurus dasas, his national prominence started when he was legal advisor to Goldwater, which started in 1963-1964, concurrent with his Aries dasa commencement. Since Aries is the natural sixth house indicator in this chart (the house of competition/politics), this house is blessed; also, similar to Mr. Rehnquist’s Cancer dasa, the ruler of Pisces is Bhatri Karaka, which helps ambition. The Sun is the status provider in the chart, in his eleventh house giving a raise in status. His appointment as Assistant Attorney General came during an Aries-Scorpio dasa, a time of great drive and skill in his chart (Venus, Mercury and Jupiter, several skills enhancing and yoga producing planets aspect Aries in this chart. Scorpio is the indicator of partnerships in this chart, and Jupiter being in this sign indicates luck on his part in partnerships.

His appointment to the U.S. Supreme Court occurs in her Aries-Aquarius dasa. Similar to his Cancer dasa, Aquarius disposits to his twelfth house (public service) Jaimini Raj Yoga of Saturn and Moon, and to Rahu in the ninth house. Aquarius contains his competitive planet, aspected by Libra, his eight, tenth and second house dasa. Also, Aquarius is his fourth house indicator of status, giving rise in status in life, perhaps unexpectedly (eighth house Arudha).

The ascension to the Chief Justice of the Supreme Court was nominated June 17, 1986 by President Reagan, during a Sagittarius-Libra dasa—again, his Saturn-Moon conjunction produced a Raj Yoga and he took the position during a Sagittarius-Virgo dasa, with his Sun as leadership indicator in the chart showing a rise in aspiration (11th house).

The 1998 Libra dasa commenced with his inclusion in the second impeachment trial in U.S. History, a peak event for any Chief Justice of the Supreme Court.

Just from this simple exposition of events in the late William Rehnquist’s life we can see the dasas in the chara dasas functioning smoothly and indicating significant events in the former Chief Justice’s life. I will follow up with subsequent articles supplementing this analysis and integrating the upagrahas.