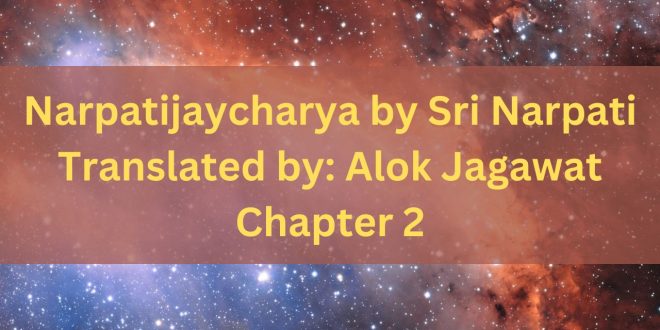 I pray to universally existent Brahma, the undefined, the beloved of all Yogijan, the symbol of eternal happiness. I “Narpati”, With a heartfelt devotion to Goddess “Saraswati”, who is the beloved of many Devatas and knowledgeable men, embark upon the journey of writing the Grantha” (the book) which will be a key to success of kings. With this, I start the epic work called “ṇarpatijayacarya ṣvarodaya”

Commentator: Most of the Granthas mentioned above are not present in their exact form. It is difficult to find them.

Sri Narpati remarks that a king carrying a “Hina-Swarodaya” (Heena means weak Swara or with something lacking) is defeated at the behest of his enemy. Even if he owns lot of soldiers, horses, elephants and supporters, he will lose the battle owing to this “Hina Swara”.

The author mentions that warriors can win the battle only to the extent till they lose all good swaras expounded by a “Swara Shastra’ expert.

Commentator: The author is giving due importance to an expert of Swara Shastrargya and his presence to win battles.

A king can win a battle even without the help of a “Swara Shastra” expert, but then his triumph will be as short lived as the letters formed through floor beetle or as the blindness of a Pied Crested Cuckoo (Chataka).

Commentator: Floor beetles are fast and alphabets will vanish if beetles are used for formation of words. Pied crested cuckoo has a short-lived desire for rainwater; which is referred as blindness over here.

A king, who is not assisted by a “Swara Devagya” (expert of Swara) has his kingdom standing on the poles made of stem of a Banana tree.

Commentator: Stem of a banana tree indicates weakness of the base.

The king will be bestowed the wealth of victory; if he follows the man who is righteous, who has controlled his cravings; and who is an expert of “Swarashastra”.

With proper Swarabala one can fight with the strongest man carrying heavy weapons. Sri Narpati says that a king should have Panchratnas (Five gems) in his court. They include:

Commentator: Swara refers to cosmic sounds or nada. A human body has different nadas inside. One can hear these cosmic sounds during the awakening of Kundalini. As the shadchakras get “bhedan” or are pierced, several nadas are produced. In super-conscious state, these nadas provide keys to the kala gyana or knowledge of time. The Swaras correlated to chakras of human body, which produce cosmic nada. They influence human psyche by different patterns. Knowledge of these swaras gives us the key to physical, psychological and transcendental state of mind. The all-pervading Maya chakras mentioned by these chakras are projections to your original six inside. Once you know what is inside; you will always know what is outside. Once you know what is outside (swara chakras), you will know what is inside. In short, these chakras are cosmic sound patterns that hold the golden key of “Kalagyana”.

According to Narpati, a king can win over a battle with “Indra”, if he starts his combat after a thorough knowledge of all these chakras.

Commentator: Sri Narpati has mentioned about eighty-four chakras in the starting of the sloka and actual mention of names is far less. Either some slokas of this part are missing, or Sri Narpati himself avoided the same. Reader’s discretion is adviced.