On Crowding of Planets By A.V. MARIMUTHU

‘Taken with permission from The Astrological Magazine: May 1977 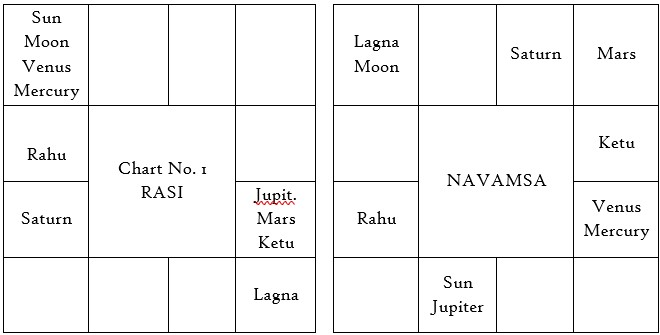 Let us consider Chart No. 1. The 4th lord Jupiter views his house, and the 5th lord Saturn is in the 5th. So, we may say that the native has good education, good mother and good children. But what is the actual case?

He lost his mother in his 3rd year, stopped his education at 11 years and now he has no living issues His wife gave birth to eight children, but none of them survived.

You are advised by your family doctor to have some tablets. You do not know the price, but have one rupee in your pocket. After reaching the medical shop you are intimated that the price is five rupees. What will be your position? Even though you require the tablet you cannot buy it. In a similar manner, even though a karaka views his Bhava that cannot produce good results unless it has sufficient amount of strength. This strength includes

Now let us analyze the first horoscope. The karaka for education (Mercury) is with the 2nd lord Venus. But he has not much strength.

You may argue here that the native may not have education because the karaka is neecha(debilitated). Please note the position of the Moon and you clearly see neechabhanga (cancellation of debility).

Here is another problem. Mercury is Lagna lord. Therefore, he will do good according to his placement and conjunction. Since he is with the 2nd lord (education) the native may get education. Is it true about the native? This doubt will be cleared from Chart No. 2. 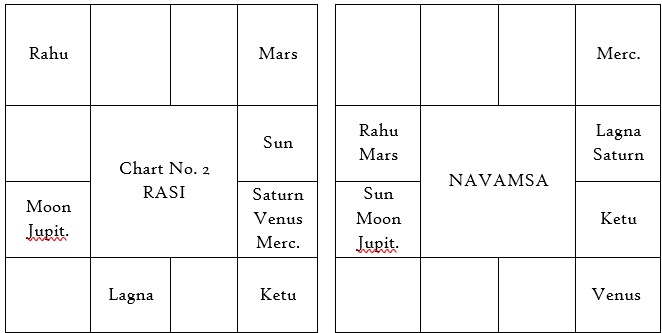 Here the karaka for education is the owner of the 8th and the 11th from Lagna. So, according to the above rule, and since Mercury is a malefic for this Janma Lagna, we may guess that the native may not have education.

Here the fact is, the native is a BE. So, the position is that if a karaka has attained sufficient strength, he shall surely give good results according to his placement, conjunction and aspects, irrespective of his ownership

In char No. 2 note the position of Mercury in the Navamsa. He is in his own, so he is very strong. Mercury, who gets good strength in Navamsa, views the 4th Bhava and is with the 4th lord in Rasi. Mercury and the 4th Bhava represenet education. So, the native has a chance to have find education.
Mother

See from the 4th Bhava. The 7th is viewed y Ketu who is a malefic . Since Bhava lord and karaka are not in good strength, the native’s mother died during the Mahadas of Ketu. The native was born at the end of Mercury Mahadasa. He lost his mother at the age of 3 years.

Let us switch over to chart no 2. The karaka for mother is in the 10th place. He is with the 8th and the 12th lord. The karaka is pahai in Leo. But this karaka is in his own star. Even though the karaka is pahai at Rasi, he is strong due to occupation of his constellation. So he can give good results according to his placement, conjunctions and views. He views the 4th Bhava and is with the 4th lord. So, the native may have good and long-lived mother.

This native was born in the sun Maha dasa. From the 4th, the 2nd contains Rahu. He is the only malefic who will be maraka for his mother. Since malefic view the Bhava and karaka we may guess that the native’s mother will be either sickly or ill-tempered.
Children

In char No. 1, Putrakaraka is weak from Lagna as well as the 5th and the 9th lords. Therefore whatever the strength of Jupiter, the native will not get issues. Morever, if a malefic is in the 5th from Lagna, then surely that native will have Putradosha. This is so, since Saturn is in the 5th. A sloka says that if the 5th and the 6th lords are conjoining, then the native will not get living issues. From the Moon Lagna, the 5th  and the 6th lords are conjoining with Venus (the 3rd and the 8th lord – another malefic). So even though the native’s wife gives birth to eight issues, none is living today. And at the same time, this shows the maleficence of Saturn in the 5th even though he is in his own house.

Let us consider chart no 2. Here also there is a malefic in the 5th. According to the Moon Lagna, the 5th and the 6th lords are in the 8th. But we cannot say the same thing we told about Chart No. 1.

From the Moon Lagna, the 5th and the 6th lords are in the 8th. But note that lunar Lagnadhipati is there with them. Moreover from Janma Lagna Jupiter is karaka for children. He is with the 9th lord the Moon. Karaka is Vargottama, has good strength. And hence there is a possibility of late issues.

In both the horoscopes, note the position of Mars, karaka for brothers and sisters. In Chart No. 1, he himself is the karaka and in chart no 2, he views the 3rd and the 11th  Bhavas(place of brothers). In the first horoscope, Mars is in his own Drekkana and at the second horoscope the placement in Navamsa and in Drekkana falls in the same Bhava(Parijatamsa). So we can judge that they have brothers and sisters. 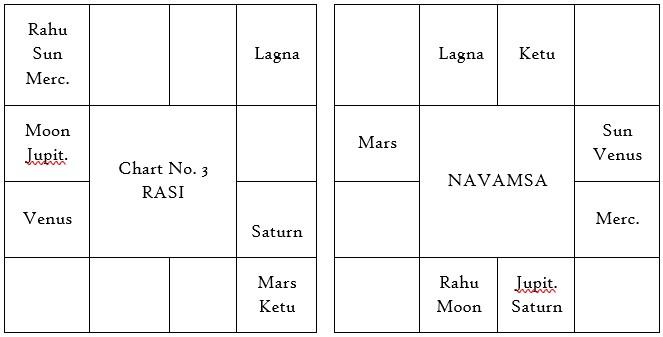 Now chart no 3. Here the 4th lord himself is the karaka for education. But Mercury does not get any favorable strength. So, this native (lady) does not have any worthwhile education. She left school at the age of 13 years.

Karaka for mother stands in the Moon’s Navamsa and in the Moon’s Drekkaana( Parijatamsa) and is strong enough. But the karaka neither views the 4th Bhava nor 4th  lord. In such cases we have to look to karaka. From the 4th lord, the karaka for mother Venus stands in the 11th. It is a good indication. So, we can judge that the lady has good mother; she is beneficial also.

Form the 9th lord Saturn, the karaka (the sun) is weak. So, we cannot say that the lady has a good father. I came to know that her father is mentally unstable.

Since mother is stronger than father in Chart No 3. The mother is managing the family. Even though the father works, he is afraid to handle his family. He gave up in favor of his wife.

I want to explain another important point. In any Bhava there may be malefic and benefics. In that case, an astrologer cannot come to a sudden conclusion. In such a case, the above mentioned principle holds good.

We shall now consider Chart No. 4. 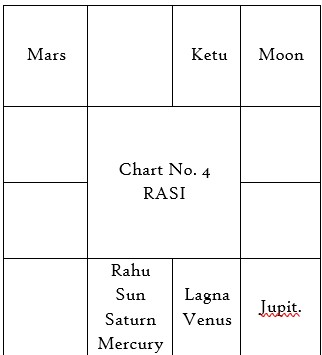 We have given only Rasi and not Navamsa. From Rasi alone, it is too difficult to guess one’s education. I found later that the karaka for education (Mercury) is in his own star. It gives sufficient strength. He is placed in the 2nd Bhava and is with the 4th lord (education). The native is now doing his B.Sc. I year.

If you check this article you can see that I am dealing with only mixed planets. If malefic and benefics are aspecting or tenanting a Bhava then you can utilize this method.

In Chart No. 2, the 9th Bhava contains the Sun. Of course he is in his friendly house. But he has secured no favorable strength in Amsa or Drekkana. So we cannot say that the particular native will have a good father. Actually his father has earned a lot, owns lands and houses in his period.

The reason is that Jupiter and the Full Moon aspect the Sun. They are benefics both according to Pachha and Adhipatya.

If the sun has good strength as specified earlier the result may be extraordinary.

So my suggestions are as follows:-

Here I want to add that if a Bhava is viewed by the Bhava lord or Lagnadhipati, then the Bhava results may be prosperous if the karaka is strong enough as already outlined