A MARAKA is a death-giving or death-dealing planet, and a marakasthana is a house or place, occupation of which renders a planet a dangerous one, inclined to give troubles upto death.

The English poet, Tennyson, in his Ulysses, sang:

Death closes all; but something ere the end,

Some work of noble note may, yet, be done

Not becoming man that strove with Gods

The soldier’s warrior’s valour, the lawyer’s forensic eloquence, the doctor’s curative power and the surgeon’s skill, the vocal musician’s voice and the instrumental musician’s expert skill are all put an end to by death. So it behoves one to carefully study a horoscope, to find out if it is a long-lived one, or one of medium life or one of Alpayu (30 or 32 years or less). If in an Alpayu jataka (nativity), Dasa or period of maraka planet also runs, one must be wary of death closing all. But, if the horoscope shows long life of 75 or 80 years, Dasa of a maraka planet cannot kill but may give troubles and mental agony unless the maraka planet is deprived of his sting.

For Aries ascendant (Mesha Lagna), Venus, lord of the 2nd and 7th, Mercury, lord of the 3rd and the 6th and Saturn, lord of the 11th for a Chara (movable) Lagna or cardinal sign and hence a badhaka, are maracas. So sage Parashara says:

meaning that a combination of Saturn lord of the 10th and Jupiter lord of the 9th does not cause Raja Yoga; and on the other hand, if Jupiter is joined by or aspected by Saturn (lord of badhakasthana) Jupiter even becomes a doshi or papi (malefic) though he, as owner of the 9th and the 12th, is predominantly a benefic.

The following horoscope of the late Sri V. Govindarajachari, a leading civil lawyer who became a High Court Judge but died after only two years on the Bench, shows the evil of Venus lord of the 2nd and the 7th, and of Saturn, lord of the 11th, though also of the 10th. 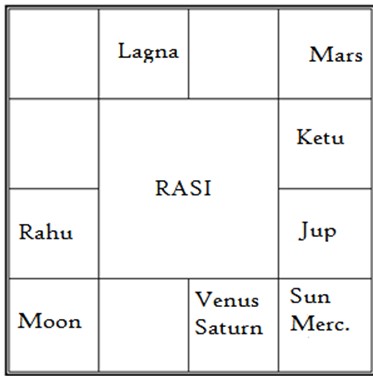 For Cancer ascendant, the Sun lord of the 2nd will seldom be a maraka, as he is a good friend of lagnesa the Moon. But, Saturn lord of the 7th and the 8th is a definite maraka, as also Mercury lord of the 3rd and the 12th, who, however, will be good in the 3rd. Venus, lord of the 4th and the 11th may kill in a case of poor longevity, unless he becomes a sadhaka placed in the 9th in Pisces. For Leo, Mercury is lord of the 2nd and the 11th. But, if in the 2nd in Virgo or in the 10th or in the 11th in Gemini, he gives high education, good speech and much money. If, however, he is weak he may show his mischief as a maraka. And, Venus, lord of the 3rd and the 10th is no doubt a maraka, in cases of poor longevity unless he is in th 9th or the 10th in own house or better in the 3rd in Libra. Bhavartha Ratnakara swears that, for Leo Venus in the 3rd in Libra is a shubha (benefic) or in the 5th.

For Makara (Capricorn) Lagna, the Sun lord of the 8th and a bitter enemy of Lagna lord, Saturn, is bad and baneful, unless he is in the 3rd or the 11th. Jupiter, lord of the 3rd and the 12th is also a maraka, though in the 3rd in own house or even in the 12th in own house, he is good enough. And, he may be in neecha in Lagna if with neechabhanga (cancellation of debilitation).

For Makara (Capricorn) Lagna, Saturn is a benefic, but, for Aquarius ascendant, for which he is lord of the 1st and the 12th he is not such an unmixed benefic. Mercury lord of the 5th and the 8th is not good for Kumbha (Aquarius) Lagna; but, the Sun lord of the 7th is not bad but good, especially when in the 3rd in oocha, or in the 10th or in the 11th whereas the Moon lord of the 6th is bad unless he is in the 6th or the 3rd.

Previous Vaara Chakra Usage
Next On Crowding of Planets By A.V. MARIMUTHU