In the October 1981 issue there was a learned article by Mr. Damodaran Nair, which is thought-provoking. The learned author, while rightly saying that generally Saturn in the 12th is bad, opined that Saturn in the 12th, a Jovian house Pisces and well aspected by exalted Jupiter, lord of 9th, gave high yoga and may indicate sanyasa or asceticism. To illustrate his thesis he gave following horoscope of late A. Ramachandrier, Advocate, Madras, who became a judge of the Mysore High Court. The said horoscope can be culled out from a book of late Prof. B. Suryanarain Rao. 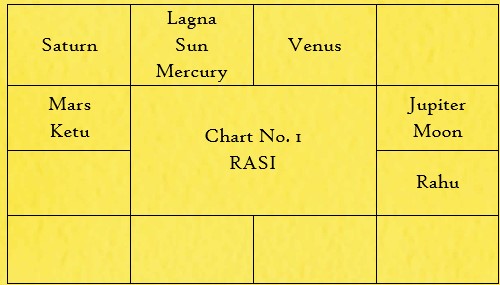 True, Jupiter lord of the 9th and the 12th wherein Saturn lord of the 10th and the 11th is placed, is exalted, in Chandra Kendra (lunar angle) and aspects Saturn in Pisces, a house of Jupiter. But, the native’s rise and elevation were in the Dasas of the Sun and the Moon lord of 5th and lord of 4th respectively. The native had two wives and no issues and so had good reason for virakti or vairagya, i.e. dispassion needed for an ascetic, indicated by Saturn in the 12th is sublimated. But I do not think the native ever took to sanyasa. Moreover, the chart will illustrate the case of yoga better if prospered in Saturn Dasa.

On the other hand, here is a horoscope, wherein Saturn is in 12th in Pisces and where the native prospered as a District and Sessions Judge only in Saturn Dasa till Rahu Bhukti. 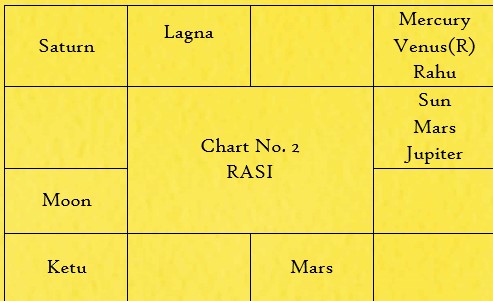 The lower grade of the Yoga is perhaps due to the lesser strength of exalted Jupiter diluted by debilitated Mars. According to Mr. Y. Keshava Menon, this chart assures longevity upto over 87 years and sathabhishekam; and it is a Moksha-Jathakam as Saturn is in a Jovian house (Pisces) and in a Jovian Navamsha (of Kodanda or Dhanus) and Ketu is in the 9th in Sagittarius in Moola 4 and hence in Cancer Navamsha whose lord, the full Moon, is dignified in the 10th. But Sanyasa yoga may not materialise, despite the existence of the factors, for virakti or vairagya. However, I have given in these columns the horoscope of Sri Trivikrama Ramananda Bharathi, Swami of Sri Sri Siddeshwari Peetam at Courtallam, an Aries native, with Jupiter and Saturn in the 9th (thapas-sthana) in Sagittarius. He took to sanyasa, on losing his wife, when he was a lawyer in Machilipatnam in Krishna District; and he was nominated by famous Mounaswamy (credited with performance of many miracles) as his successor to Sri Siddheshwari Peetam. Sri Trivikrama Ramananda Bharathi Swamy has completed 25 years as the peetadhipathi and is nearing his sathabhishekam on 81st birthday.

If the Sun’s son, viz., Saturn is in a house of Jupiter and aspected by Jupiter, the native becomes a chief, a kingly person or a military commander of police superintendent, etc.

For Aries Lagna, Saturn is the excellent lord of the 10th and also baneful badhaka, as the lord of the 11th. Aquarius being the Moolatrikona house of Saturn, his lordship of 11th or bhadhaka dominates. According to an ancient dictum as “the Sun’s son Saturn is a naisargika or inherent malefic, his evil tendencies prevail over his good (even where the good lordship is of his Moolatrikona house as in the case of Gemini ascendant)”. Even if karma bhadaka may be in the 12th, he becomes auspicious and fortunate only if the said the Saturn in the 12th in Pisces is blessed, controlled and transformed by exalted Jupiter, the lord of that 12th house and of the 9th (fortune). Saturn in the 12th may make one ascetic at heart who does not care money. But Jupiter and the Moon will give a native a princely position and life. For actual renunciation or sanyasa yoga there must be a strong pravrajya yoga due to four planets, including the lord of the 10th being together in a good place or Jupiter and Saturn being in thapo-mood and not in mundane position and prosperity. I, however, fully agree with Mr. Damodaran Nair that if Venus is Saturn’s bosom friend, (so that Venus-Saturn yoga is good for worldly prosperity) Jupiter is Saturn’s venerable preceptor so that sage Garga praises Saturn in a Jovian house Sagittarius or Pisces (more especially the former). If a good and powerful Jupiter blesses such a Saturn by his aspect, he transforms iron into gold.

Previous Requisites of a Genuine Astrologer by Dr. N. GANGADHARAN
Next Predicting Through The Time Triangle