Predicting Through The Time Triangle

Predicting Through The Time Triangle

This  is  a very simple method of doing day to day predictions when we do not have other  tools of prediction like the Tarot cards or the Horoscope. As taught to me by my teacher Mr. Sunil Purohit, I have been practicing this for the past many years. It has given me perfect results and also to my colleagues who are practicing it. 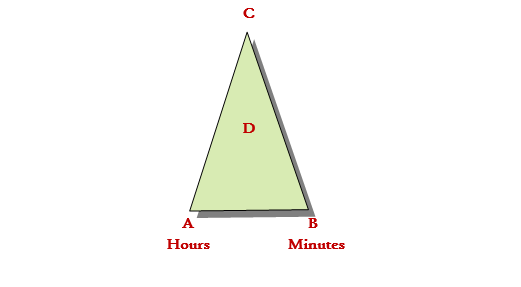 Calculation of C: Put the hours under A, Minutes under B. The numeric total of both hrs and mins will be written at the apex which is C.

Calculation of D: The number which is written at the apex [C] should be deducted from Nine. (Nine means the nine planets).

1st answer should be deduced from —-D

2nd answer should be deduced from —-A

3rd answer should be deduced from —-B

4th answer should be deduced from —-C

4=Herschel/Uranus: Continuity, Suddenness in events, Drama beyond space and time, Over-confident, Think own self great. E.g.: A man fell from the 6th floor but he fell on two people, they died but he survived—that is drama. Eight days after a boy’s marriage, his wife elopes to a foreign land and cannot be traced. That is Herschel drama.

7=Neptune: Cheating, Deception, illusions, Fantasy, Occult science, Hypnotism, If traveling question, Going through water or crossing sea, Defective or Mysterious Relationships (gay, lesbians, or he is like my father or brother, but actions do not show that). Neptune is like Rahu, if appears constantly means defective relations.

The above method can be mixed with astrology. We can take the waxing moon as positive and waning moon as negative. We can also mix the movement of planets, retro, direct to give answers.

A client asked will my son go abroad for studies. The time he gave was 1:20

D=6 means Venus which is a benefic planet. This means the child will go abroad for studies.

The next question was will he successfully get a degree. So we take A or hours which is equal to 1. One is related to Sun so yes he will get a degree.

Then the mother asked will he get involved in a relationship there. So we take B or mins which is equal to 2 and related to Moon or emotions so yes he would get into a relationship.

Overall would he be successful in life. The number at the apex C is equal to 3 which is related to Jupiter or expansion, growth etc. so the answer is yes.

In one time we can answer four questions. We must relate the karakatva of planets.

Is the man I love also in love with me?

D=0 means tell the client it’s a period when the answer given will not be satisfactory to her.

If she still insists then hrs is A=9 which is related to Mars, the planet of aggression, passion, sex. It means the relation was mainly because of physical intimacy.

Will the relationship last was the next question. B=0 means a waiting period.

Will he marry me? Now we go to C=9, which is again Mars. I told her it could mean he would not want to let her go, just be in an intimate relation. Yesterday I got the feedback that he fought with her (mars) for being behind her to get married. He admitted he was not prepared for marriage now but after two years will decide on marriage.

A=Hours=11=1+1=2
B=Minutes=54=5+4=9
C=A+B=2+9=11=1+1=2
D=9-C=9-2=7
Her first question was I have lost my money, will I be able to find it? Answer is D (7), which is Neptune, which is a planet of deception, fantasies, dreams, and illusions. So I told her to check again she could have kept somewhere and is searching elsewhere. Next she said I doubt my servant has taken it and has still not come for work. Now the answer was moon which was waning at that time, so I interpreted the answer as No, also keeping Neptune in mind. But again she insisted the servant only must have taken it. I also rechecked with the third answer which is B=9. So it was Mars and Mars is a planet of aggression, security, discipline. I was sure it was not the servant and I told her to search again. She asked for a remedy to find the money. I went to D=2=Moon. I told her to take a silver glass and turn it upside down and keep on table and then search again at other places. She did that and she found the money between the clothes that the Dhobi (dry cleaner) had ironed and brought. It was her illusion (Neptune) that she had kept the money in the drawer. She called back in ten minutes to say she found the money.

When we use this method in our day to day life, when we use it regularly an expertise comes in and we get the knack of linking the planets as per their karakatwa (significations) we cannot go wrong is as per humble experience of using it for many years and this method has not failed me ever.

Previous Saturn and Asceticism By R. Lakshmanan, M.A., B.L.
Next The Deceptive Concept of Jupiter by Booti Lal Marwaha