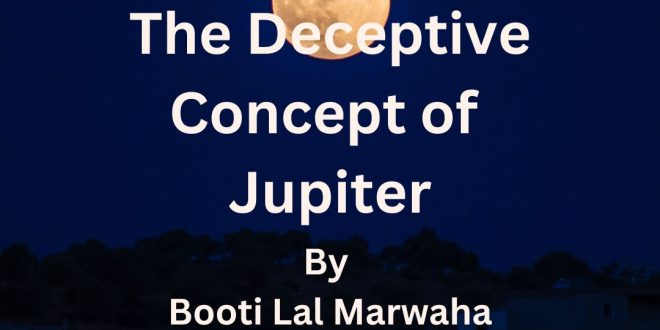 The Deceptive Concept of Jupiter by Booti Lal Marwaha

Jupiter has been defined by classical texts on Indian Astrology as a giver of wisdom, intelligence and satwik temperament. He is said to be a minister of gods and their priest. He possesses a huge body, has yellowish eyes and is phlegmatic.

The author of Phaladeepika suggests that Jupiter signifies one’s knowledge, qualities, behaviour, conquering of senses, study of Vedanta, well-being of all, wisdom and honour.

From the above it is obvious that Jupiter is regarded as the priest or minister of gods. He is not a king. The minister is a planner and a counsellor to the king. Priest is pious, a holy person of virtues. Jupiter exalted in a Kendra confers on one a Pancha Mahapurusha Yoga called Hamsa Yoga which according to Prof. B.V. RAMAN in his book Three Hundred Important Combinations makes the native a likeable personality, righteous in disposition and pure in mind.

Jupiter grants wealth of wisdom and not of gold, bliss and not pleasure, contentment within and not satisfaction of sensual desire. Jupiter rather chastens a person and enables him to control his desires. He lifts the native spiritually high and not officially high. If at all he makes the native hold a high office. It is in the temple, places of general  well-being and educational institutions.

Unfortunately, in the world today everything is measured in material terms. Other aspects which were of vital importance in the remote past have ceased to be any longer factors of importance. For example, success in worship and accomplishment of Siddhi was once upon a time so important a factor that the ancient Rishis felt the necessity of introducing Vimshamsa Varga.

In the present context prosperity sought for can only be assessed from Raja Yogas or Yogas conferring wealth and acquisition.

The great Parasara says that planets do not give good or bad results according to their house position alone. Determination of the effect should be made from the sambandha (connection) they have. The sambandha as known to the students of Astrology is of four kinds: (a) mutual exchange of houses, (b) conjunction, (c) mutual aspect, and (d) one-sided aspect.

Planets without sambandha give results in their own Dasas or in Antaradasas of Atma Sambandhi and Sadharmi planets.

Kendra lords in their own Dasa (period) and in the Antara (sub-period) of trikona (trinal) lords or vice versa give good results only provided they have sambandha; otherwise they yield bad results.

About trikona lords Parasara says that they are all subhas (benefics) (whether they have sambandha with each other or not) but give bad results only if they are also lords of the 3rd, the 6th and the 11th or develop sambandha with the paapi lords (malefics).

He further says that if Dasa lord is a paapi (lord of the 3rd, the 6th, the 11th and the malefic 8th lord) the Antara of an unblemished trikona lord having sambandha shall give mixed results; when not having sambandha he will give bad results.

The planets deposited in the 6th, the 8th and the 12th to Dasa lord do not give good results and those placed in the 7th promote ill-health.

No analysing the three charts presented by Sri Bepin Behari for citing examples where Jupiter had not given the benefic results in his sub-periods we find as in Chart I, Mercury is a paapi being lord of the 3rd and the 6th. Jupiter tough an unblemished benefic has no sambandha with Mercury. Moreover, Jupiter is placed in the 12th to Dasa lord.

Venus is a Kendra lord. Jupiter has no sambandha with Venus and is deposited in the 12th to Dasa lord.

In the above situation Jupiter’s Antara in the Mahadasa of Mercury and Venus with whom Jupiter has no sambandha could only give bad results. If Jupiter had sambandha with Mercury he would have yielded mixed results and in association with Venus he would have given Yoga-karaka results.

i.e., if Jupiter in trikona is associated with Lagna lord, he helps the native accomplish all jobs on hand and gives good results, etc.

The Sun is a trikona lord and so is Jupiter. None of the two is having lordship of a paapi house or has sambandha with a paapi lord; hence free from blemish. Therefore, Dasa and Antara of the two are supposed to yield good results.

The Moon is a Kendra lord and Jupiter a trikona lord. Both have no sambandha. Jupiter is in the 6th house to the Moon and the Moon is in the 8th house from Jupiter. Hence Antara of Jupiter could not give good results.

It may be borne in mind that the native was born between the eclipses of the Sun and the Moon with an interval of 16 days. The Moon placed in the 4th is aspected by all planets excepting Jupiter. As per the author of Mana-Sagari the combined effect of all these planets makes the native skeptical, respectable, well-known and conqueror of enemies, etc.

Conjunction of Rahu with the Moon makes the person spend his life away from the native place (home) and deprive him of the comforts of the said place. Rahu’s aspect on the Sun will generate a sense of unnecessary fear and an extra sensitive nature. Exchange of Saturn and Venus promises rise in life after marriage and Jupiter in the 3rd from the 7th promises some help from his brother-in-law. On the whole the planetary position is such that it will make the native a conflicting personality, who is often misunderstood, his life full of struggle and sacrifice for the cause of others and be a self-made man. The balancing factor seems to be only Jupiter in the 9th in own house.

Saturn’s transit in Karkataka (Cancer) where the natal Moon is deposited and from where he comes in opposition to the natal Sun could not give better results than what the native has received. However, the Sun’s Antardasa in the Moon’s Mahadasa despite all the blemishes shall prove good as the sambandha of the 4th and the 5th lords develops. The native is counselled not to be upset with the behaviour of the people above and below, and adjust himself.

Chart 2: — Jupiter being lord of the 7th is a killer. He has sambandha with debilitated Saturn. Rahu is associated with Saturn and deposited in Mesha (Aries) whose lord Mars is also debilitated in Navamsa. Jupiter is not only the 7th lord but is also in the 7th from the Dasa lord. Even if Rahu acts as Mars the sambandha of the 6th and the 11th lord Mars with the 7th lord Jupiter does not promise good results specially when Jupiter is in the 12th from Mars. Some relief could be provided by the 5th and the 12th lord Venus having sambandha with the 7th and the 10th lord Jupiter but Venus is wrongly shown in the chart as in Thula (Libra). It should be in Vrischika (Scorpio). Nothing better could be expected under the circumstances.

Similarly Antara of Jupiter in Mahadasa of other planets yield the following results: —

Moon/Jupiter: Good results for Mesha, Vrischika and Meena and bad for Vrishabha and Kumbha Lagna natives.

Saturn/Jupiter: Fair for Mesha, Mithuna and Kumbha and bad for Simha, Meena and Vrishabha Lagna natives.

Mercury/Jupiter: Good for Mithuna, Kanya, Dhanus and Meena and bad for the rest.

Venus/Jupiter: Good for Mithuna, Kanya and Vrischika and bad for Vrishabha, Karkataka and Thula Lagna natives.

With the given positions of Jupiter I do not think the natives should lack in intelligence and public image. Jupiter generates in native No. 1 a sense of precociousness, human approach, frankness to the point of bluntness, and interest towards occultism! In native No. 2 application of intelligence in divergent fields; and in native No. 3 a shrewd sense of motivating people for the desired goal.

The common feature of the three horoscopes is that they all have Pasa Yoga and despite the calibre at their command they must get some blame or the other in their lifetime which should seriously upset. In all the horosceopes Saturn does not qualify as a benefic and has sambandha with Jupiter.