The Hand And The Horoscope

Stokes is known worldwide as the “Consultant Palmist” & is regarded as one of the finest palmists in the West. He has many years of combined practice, blending from an array of diagnostic skills coupled with 10 years training in the Harry Edwards School of spirit mediumship and guidance. His ability to access the wisdom of the multi-medical and multi-spiritual arenas of the Indo/Pak sub continental energy flow disciplines, such as Hasthricka and Il Mul Kaff, have meant a sharpening and honing of clairvoyant skill. These skills can take a subject from pre-birth through the main events of the life, to the present day.  T Stokes reads life histories from emailed handprints from all over the world, he is often called “Britain’s psychic agony uncle”

If we can take a quick re-appraisal of what we need to see before examining palm lines. Notice the picture below, and first categorise the hand shape, the psychological type, whether introvert or extrovert, is the body shape Ectomorph, Endomorph or Mesomorph ? and if possible the astrological sign, but many people will say, “I m not typical of my sun sign and my horoscopes never fit” what they mean is newspaper horoscopes which in reality are just sun sign solar-scopes, a real horoscope is individually tailored to you from all the planets not just the sun sign.

Remember that when you look at the palm lines they must be filtered through all these other factors, some amateurs see just the lines, and this is very wrong practice.

Many years ago I would have to travel on the train and bus into the city, and by the time I reached my destination I knew everything there was to know about the people sitting opposite,  they had no secrets from me as the hand never lies.

So the hand depicted here 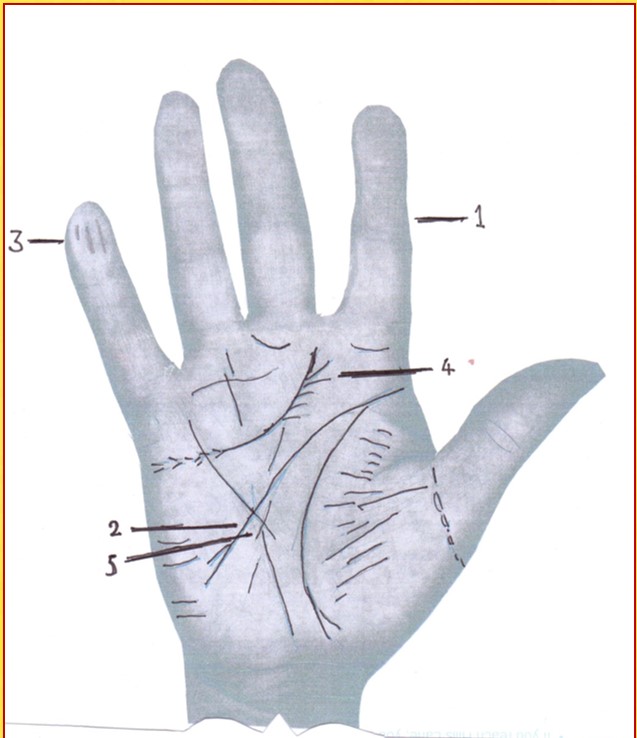 (1) notice  the short thin index finger, called by some psychological schools the world finger, this is the ego and a small Jupiter finger shows from slight lack of self confidence to when very small a full blown inferiority complex as here, the Jupiter middle phalange when thin tells of a negative early father experience usually resulting in a feeling of not being comfortable with others and stressful social interactions, and inbuilt feelings of inadequacy and worthlesness, an over strict father shows in the Jupiter or world finger primarily as low self esteem, the discoverer of the range of inferiority complex disorders, Alfred Adler said we hold the trauma of any emotional hurt in our weakest organ, and we see here on the headline (2) some long term depression stemming from paternal abuse or over strictness, a recent article in the British Medical Journal questioned whether anti-depressants actually work, and there is much evidence to say they don’t, family doctors are now giving them for back pain and related conditions which is hardly good practise, the new trials on daffodil essence promises far better results with non addiction and without the side effects that have plagued the allopathic Benzodiazepans and Fenothiazines, the landmark book “Noonday Demons” by Andrew Solomons takes a much needed fresh look at the various depressions in particular Bi-polar disorders, the book is being hailed for its long and superb research.

(3) They may not show in the illustration but small lines appear on the tip of the Mercury finger, all fingers relate to glands, and this shows thyroid imbalance, the seaweed kelp is best here.

One often hears women say “I have been months on a diet with no effect” because the biggest thyroid disrupters are in tap water, use a water filter jug which takes out much of the chlorine and fluoride, do not use a fluoride toothpaste, baking soda is good provided it contains no aluminium, and see its well dissolved or it can scratch the teeth, and do not cook with non-stick pans which contain Perfluorooctanoic acid known as PFOA, the American manufacturers promise they will ban it on health grounds after 2015, fast food packaging also contains thyroid disrupting chemicals.

The lady whose hand this is complained of knee pain when walking distances, but reacted badly to allopathic arthritis medication, Ayurveda is better but she took some persuasion to try whipping her knees with stinging nettles, but found with this she could even do hill walks with the ladies over 50s club, incidentally Louise Hay the well known healer says sore knees represent pride and an unbending ego, and ego problems always go with a short or malformed Jupiter finger.

Studies show that a young girls relationship with her father, called the “Electra complex” is paramount to her later development, a woman’s love fluctuates during the month and is up and down, but a man’s love is constant, its firm and protective, even a baby girl will pick up on this, and if the relationship is primarily one of discipline as this one, then the girl will have a damaged inner view of what to expect from men, and will later accept men into her life that are unworthy of her, and her love life will be far from satisfactory.

(4) The heart line has many drops down under the Saturn finger, each tells of an emotional hurt or let down, those with low self esteem always get involved below themselves, and she was engaged for some years to a man she wrote to while on death row.

The Destiny line (5) stops short and has a cross with one offshoot going to the small or Mercury finger, this tells of a career crisis which affects the health at age 28-32, the destiny line tells primarily of career, and lines to Mercury usually cover health, her own story to this is that a bullying office manager where she worked made her ill and she had many upset

stomachs until the cross showed the crisis where she lost her job, she then went through a stressful period health wise where she got into serious rent arrears, luckily the old man who rented rooms in the house was very understanding of her plight.

Hippocrates said “all disease begins in the gut“

The Ectomorph body type, is self restrained nervous, shy and quite private and does not cope well with the stress of office managers with terrible crushes, while they are often feminine and quite beautiful she should have nipped it in the bud long ago.

This imaginative, wispy vague beauty, the sensitive but weak willed and idealistic nature is so typical of the lovely worrying and often depressive Pisces woman.

Ring out the bells of Norwich, and let the winter come and go,

and all will be well again this I know,

all will be well again I am telling you,

let the winter come and go

and all will be well again this I do know.