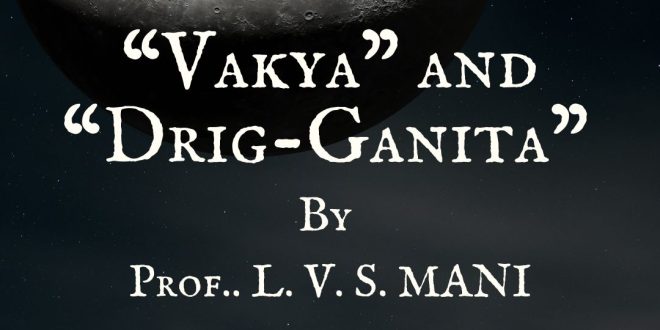 (Taken From Astrological Magazine of Raman Saheb, May 1977 Issue)

ONLY a few learned scholars know the difference between Drig–Ganita and Vakya (or Siddhanta) Panchanga.  Then what to say of lay men?  This article is the outcome of requests from a number of readers.

The ancient Hindu astronomers gave the tables for calculation of panchangas in small sentences (Vakyas) which are very easy to memorise.  Vakya (or siddhanta) panchangas are based upon these vakyas.

Drik means sight.  After careful scrutiny of the celestial phenomena including solar and lunar eclipses, calculations are made and positions of the planets, etc., are given in Drig-Ganita Panchangas which tally well with observations.

It is an established fact that Vakya panchangas have miserably failed in the prediction of eclipses and hence, they also now use only Drig-Ganita method for eclipse predictions.

Then, are we to conclude that our ancient Hindu astronomers were not able to predict the correct positions of planets and timings of eclipses!  Not at all!!  Modern Western astronomers are struck with awe and admiration when they find that the ancient Hindus, with their crude astronomical instruments, were able to predict the timings of eclipses very accurately.  When we see that modern astronomers require the modern printed tables for their calculations, one cannot but admire the genius of the ancient Hindu astronomers, who gave the tables in small sentences easy to memorise and so handed down to us that way.

These vakyas which were very accurate in those days are not so now.  The ancients had ordained to check periodically and give small correction as and when necessary to the vakyas used in the calculations so that the calculated positions may agree accurately with the observed ones.  A few quotations are given below to support this argument.

I am giving the method of calculating the longitudes of the planets so that they agree with observations.

Only tithis, etc., calculated using the correct longitude of planets give good results in the case of journeys, marriages, festivals, horoscopes, etc.  So, I am giving the method of calculating the correct positions of planets to tally with observations.

The planetary positions disagreeing with observations are unfit for karmas.  So, to make them fit, I am giving in detail the corrections.

After a length of time, there will be differences; then, intelligent people like Brahmagupta, will write Sastras, giving the necessary corrections.  So, Ganita skandhas (works giving the methods of calculations of planetary positions) even after a long time do not become unfit, as corrections are being given by intellectuals.

At a certain time, tithis, etc., should be determined using that method which tallies with observations.

The same is given by Ganesa Daivagnya in Graha Laghava.

It is a pity that that, due to various, reasons, these small corrections are not given and some almanac-makers use those tables without corrections, resulting in the discrepancies with observations.

The positions of the planets as given in the ephemerides of different countries tally well with observations.  The reason is that corrections are applied oftener to the tables used.  To illustrate this I may say that before 1919, Hansen’s Tables of Moon were in use. After that Brown’s Tables of Moon were used till 1960.  From 1960, the ephemeris of Moon is calculated with the help of electronic computing machines directly from Brown’s theory, and also a small correction is applied to the mean longitude of the Moon as given by Brown.  From this, we should not conclude that Hansen’s and Brown’s Tables are inaccurate.  They were admittedly correct for their respective periods.  As laid down in our Sastras, corrections are being given regularly to the tables so that tabulated and observed positions do not vary.

Another important change is the introduction from 1960 of the Ephemeris Time.  It was assumed so far that the length of the Solar day vis-à-vis the period of earth’s rotation was constant.  But now, it has been established that the period of earth’s rotation undergoes slight variations in as much as it suffers a regular decrease in the rate of rotation, resulting in the gradual lengthening of the day together with an irregular variation.  This is due mainly to the friction of the tides in the ocean bottoms mainly in shallow seas, change in the shape of the earth due to elevation or subsidence of the ocean bottom, or re-adjustment of the earth’s strata, etc.  But the variations are so minute that only the recently invented Quart Clock or the Ammonia clock can detect such variations.  So it was decided at the Eighth General Assembly of the International Astronomical Union held in Rome in 1952, that ‘In all cases where the mean solar second is unsatisfactory as a unit of time by reason of its variability, the unit adopted should be the Sidereal Year 1900.0 and that time reckoned in these units be designated Ephemeris Time”.

Further, small corrections are also made to the astronomical constants, which are now called the I.A.U. (International Astronomical Union) System of Constants.  These are being introduced in the National ephemeries.

Hence, it is in this context that His Holiness Sri Jagadguru Sree Sankaracharya Swamigal of Kanchee Kamakoti Peetam has ordained that at least hereinafter Drig – Ganita Panchanga be considered the best.