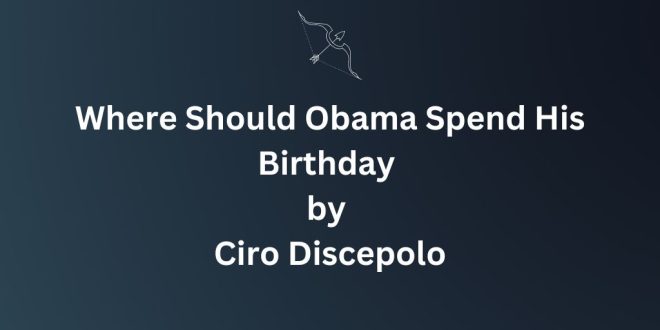 Where Should Obama Spend His Birthday by Ciro Discepolo 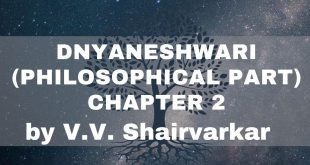 Numerology in Astrology By Ajit kumar

Lomasha Samhita Chapter On The Fructification of Bhavas

Where Should Obama Spend His Birthday

If President Barack Obama asked me where he should spend his next birthday to improve his possibilities to remain at the White House I would tell him, first of all, a few important things.

All that follows in this short article of mine is not a forecast to establish if he will stay at the White House next year, but an advice, based on a very long personal experience in this matter (42 years, over 100,000 personal consults and over 20,000 Aimed Solar Returns advices to as many people) to keep this result.

In a similar situation I would try to reinforce, a lot, the X, 11th and Seventh Houses.

Because a very good Tenth House in a Solar Return is an excellent element to improve the popularity and the power of a subject engaged in a very difficult political competition.

The Tenth House is always the best House for improvement in social and professional directions.

The Seventh House is fundamental, in this case, because this is the House of war or the House of love, then the House of audience, of popularity, of general consent.

The Eleventh House is a Seventh House at a lower octave and so it is very important to place good Celestials in these three Houses.

But, remember, that when we plan an Aimed Solar Return we don’t start from a white sheet of paper but on the contrary from a sky that is always above our head on that very day. We can only change the Domification, the Houses, moving the subject across the Earth and, naturally, I say “only” but it is much more than “only”.

Our future, in my opinion, depends almost totally on the Planets in the Houses in our next Aimed Solar Returns.

Unfortunately, speaking about the next Aimed Solar Return for President Barack Obama, we note a conjunction Mars-Saturn that, according to my long experience, we cannot place in any other House but in the Third or in the Ninth Houses. If we don’t do it, the subject will suffer terrible damages.

Another very important argument that we have to bear in mind is that, again in my experience, the power of the Aimed Solar Return is much greater than the one of the Transits.

Now I will go on looking for the best sky for President Obama’s next Aimed Solar Return.

We don’t know where he will spend his next Aimed Solar Return so let’s see the one for Washington D.C.

As you know, for security reasons very often the President is in political meetings flying on the Air Force One for many hours in a row, by day and by night.

But let’s imagine that he was a fan of Astrology and he asked me where he should go at the moment of his next Solar Return, without restrictions. 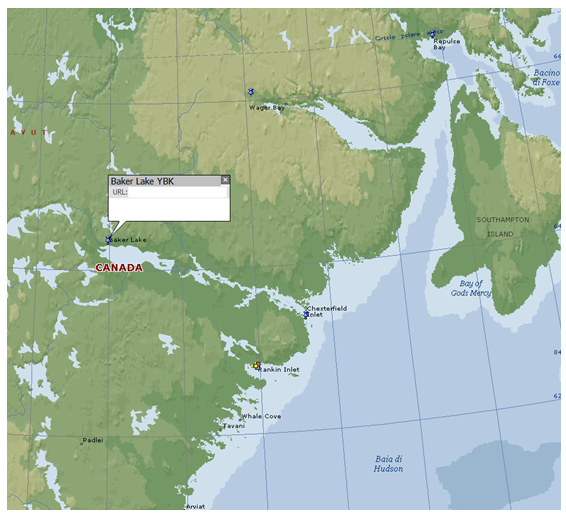 It is not a marvellous Aimed Solar Return, but – I think – it is almost the best for him.

In fact we have a very strong Tenth House with Venus and Jupiter in it. As you can see, we cannot put Mars and Saturn in the Third House (because we would have the Sun in the 11th House: a very great disgrace), but we can put Mars in the Second House and Saturn in the Third House. Unfortunately it is impossible to improve the Seventh and the Eleventh Houses with the sky of that day.

However we can operate another little change: placing only Saturn in the Third House so as to avoid an excessively negative influence of the press on him. In my practice I verified that when a Celestial is at less than 2,5 degrees from a cusp between two Houses, this Celestial works in both Houses. Then we would be able to distance Mars from the 2nd/3rd Houses’ cusp. In this way we also distance the Sun from the 12th House.

To get this result I use a software of mine (Aladino Google Earth that is not on sale outside of Italy).

Please, take a look at the picture. 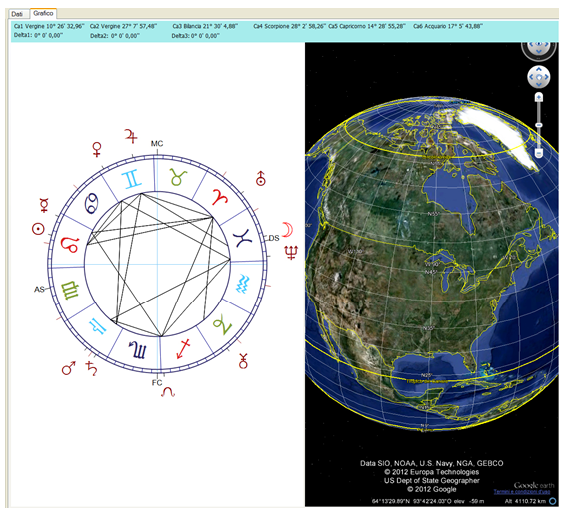 You can see that moving my mouse near Baker Lake on the image of Google Earth, I see my drawing of this Solar Return moving in real time and when the Celestials change from light red to dark red it means that the aster is not working in the range of the cusp. At this point I only have to read the longitude and the latitude at the bottom of the image and there you have the geographical coordinates where the President should stay in that moment: Latitude 64° 13’ 29.89” North and Longitude 93° 42’ 24.03” West, at the time that I indicated above.

Many wishes to the President!

The 6th House: Unfolding The Maze by Andree Leclerc

One fine hot sunny morning when my A/C was mercifully working, I woke up with …