Yogas and Viyogas by Pam Rosevear

“From the condition of the Ascendant and the planets joining and departing (yoga and viyoga) from each other are deduced the native’s good and bad effects.”  BPHS Ch. 3 Sloka 6 GC Sharma, Editor

Why do we see yogas in the chart and yet see no fructification of them?  This is one of the most puzzling aspects of chart interpretation.  The concept of yogas and vi-yogas as predictive tools comes from both Parasara, as mentioned above, ad from Surya Siddhanta Ch. 8.  The principle is very simple.  Are grahas separating from each other or are they coming together?  If grahas are going to meet, or a faster graha will overtake a slower graha, their yoga will occur.  The question becomes when, and what area of life will be affected.  We will leave the ‘when’ as later on.  The complexity of timing will be dealt with in another issue.  If grahas are separating in the rasi chart, the native will not see the fructification of that yoga.

Yogas are the joining of the grahas, as per the meaning of the word given above; the word for separating aspects is ‘vi-yoga.’  There are 4 ways that yogas and vi-yogas occur.  First note briefly the speed of grahas in the sky.  Speed refers to the time it takes a graha to make a full rotation of 12 signs in the Zodiac.  From slowest to fastest in order, are Saturn, Rahu/Ketu, Jupiter, Mars, Sun, Venus, Mercury, and Moon.

If a fast graha, such as Mercury, is at 10 Aries, and a slower graha, such as Jupiter, is at 13 Aries, yoga will occur in the chart, and almost immediately.  For one thing, they are within 5 degrees of each other, causing an association.  For another, Mercury is faster than Jupiter, and will cross Jupiter in a short time.  The yoga would also occur if Jupiter was at a higher longitude in the sign, such as 20 Aries, because Mercury will pass Jupiter eventually.

If the grahas are reversed, with Jupiter at 10 and Mercury at a higher longitude, no yoga is formed.  Jupiter will never catch up with Mercury in the sky.  This is a vi-yoga.

This makes prediction much more clear.  Examples in the charts of Lincoln and Hitler demonstrate the concepts. 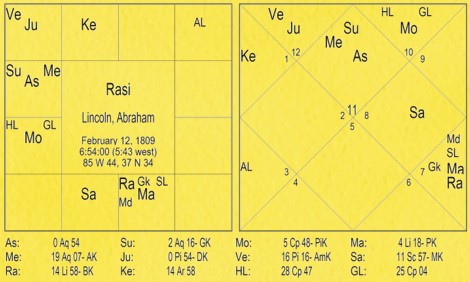 Per Lincoln’s rasi chart, Sun and Mercury are in house 1 but do not operate as yoga.  Mercury is way ahead of Sun, at 19 Aquarius, and Sun will never catch up.  The two grahas are in different nakshatras.  In the Bhava Chalit chart, Mercury moves to the 2nd house with Jupiter.  Aquarius represents philosophical intelligence and social ideas.  Sun operates almost exactly on the Sankranti Lagna Point.  Lincoln was clearly a man of the people, very humble; he expressed a reliance on the Divine and we love him for it.  If the grahas had worked in unison, his wise words would have been ginned with humor.

He does get Venus/Jupiter yoga in 2nd house for the same reason-the faster graha, Venus, is way ahead of the slower graha, Jupiter.  And they do not operate in the same house in Bhava Chalit, as we shall see.

The yoga that Lincoln does get per the rasi is the Mars and Rahu association in the 9th house.  This will come later in life, as Rahu is a slow moving graha.  Lagna Point and Sun emit warlike, 10th house Mars energy per Vara Chakra principles.  Mars yoga fructifying brings his ultimate destiny to pass.  Mars governs the Lagna Lord; also this yoga unites Lagna’s co-ruler with the 10th house co-ruler Ketu, in the 3rd house.  Lincoln’s dharma was war and social revolution.

In the Bhava Chalit chart Venus moves into the 3rd bhava with Ketu.  They are literally at opposite ends of the house but they do move together inexorably.  Aquarius’s yogakaraka, exalted at that, along with Ketu, protector of 10th house Saturn, associate and oppose the Mars/Rahu yoga occurring in Bhava Chalit.

To put things as simply as possible, that Lincoln would be known is a given with Lagna Lord in house 10.  Lincoln’s reputation in history is made by his courage to do what was morally right to keep the country together and his martyrdom occurred in the process. 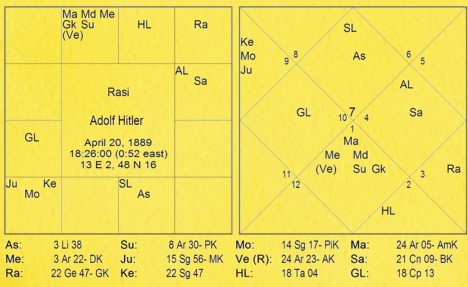 The grahas in Sagittarius and Aries were the making of Adolph Hitler.  The 3 Sagittarian grahas sit in such a way that he did indeed get Jupiter/Moon yoga, Jupiter/Ketu yoga, and later in life, Ketu/Moon yoga.  All of the grahas have emitted Venusian energy, per Vara Chakra principles.  This balances out the Lagna emitting Mars energy and left him with an ‘iron fist in a velvet glove’ persona.  In Bhava Chalit, Ketu moves alone to the 4th house.  These grahas are not favorable to Libra Lagna or Saturday birth and to me indicate grandiosity, over expectation, and thoughtlessness of the consequences to his homeland and the world at large.  He had unmistakable gifts in oratory and persuasion.  Once he rose to public prominence, he obtained full power and maintained it for a turbulent 15 years or so.  The 7th house grahas give a hint into the manner in which this was done.

Grahas represent living beings in the chart.  The 7th house represents the partner.  Consider putting faces to the grahas.

Hitler’s subordinates are almost as infamous as he is.  The Sun is Hitler himself.  People around him granted him their adulation by the power of the 3rd house grahas.  Joseph Goebbels, Propaganda Minister, is a clear example of the Mercury.  All quotes and reference material on him given here is taken from Wikipedia.

Goebbels in younger years obtained a PhD, made many attempts to get fiction published, worked as a bank clerk and as ‘a caller on the stock market.’

His allegiance to Hitler was total, unwavering, and permanent.  Hitler was definitely the Sun to him.  He said, “…I love you because you are both great and simple at the same time.”  And, “He who forsakes the Fuhrer withers away.”

When Goebbels was in power, he became the voice and face of the government.  Known for influential speaking, his speaking style was “cool, sarcastic, and often humorous.”

Hitler and Goebbels become a living Sun/Mercury yoga operating in the very public 7th house in rasi and Bhava Chalit.  Together they provided a persuasive and incendiary martial imagery.  Goebbels was responsible for the chilling pageantry that we see in black and white film footage.

Mars and Venus operate as yoga in Hitler’s 7th house.  Whether it is actually yoga might be considered debatable; it is also known as planetary war.  Nevertheless the fact remains that Hitler exhibited both Venus and Mars traits in his personality, behavior, and body.  So for our purposes this constitutes yoga.

Superimpose the face of Ernst Rohm over Venus Rx.  In their young days, Hitler and Rohm were close friends.  Rohm was openly gay and openly critical, complaining that Hitler and the Nazis did not do more to revolutionize the country.  Heinrich Himmler fits Mars to a tee.  He was purely martial from early childhood.  Himmler was at one time Rohm’s subordinate. He and others convinced Hitler that Rohm, leader of the Brown shirts, was in essence not a team player and more to the point, a direct threat to Hitler’s leadership.  Rohm was assassinated.  This incident is the center point of The Night of the Long Knives and was instrumental in Hitler finally consolidating all martial power. Himmler won the war between he and Ernst Rohm and this is symbolized by the planetary war in the chart.  Also note, Mars/Venus operates in Bhava Chalit in the 8th house.

Heinrich Himmler is known in history as one of the people most directly responsible for the ‘Final Solution’-the mass murder of Jewish people, and many from other groups considered subhuman by the Nazi regime.

It can be seen that the yogas operating in Hitler’s 7th house were symbolic of relationships with effective partners who were strong enough to make his mission their own and carry it forward. 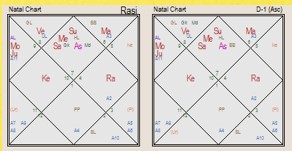 The reasons for Johnny Carson’s success are unmistakable in the Lagna.  The rasi is Venusian, governed by Air, and so is pleasure seeking.  The parade of grahas here is eye popping as well.  Sun is very humble and Saturn is exalted; he was popular with the public, to say the least.  And Mercury near the Lagna Point gives humor.  So what yogas are given?

Surprisingly, no Sun/Mercury yoga fructifies.  Eventually he got Sun/Saturn yoga; bringing rulers of houses 4, 5, and 11 together meant that he made gains with families and home.  And he also had Mercury/Saturn yoga fructify.  Due to the grahas’ rulership of houses 4, 5, 9, and 12, this indicates his need for solitude to pursue his dharma.  Seclusion was a big factor in his life.  There is no doubt that going on live television night after night for 30 years would be very draining.

Carson also had fructification of Moon/Jupiter yoga in 3rd house.  It gives the energy of two currents that were indicated in his life.  First, it indicates what he was known for – talk, through rulers of the 3rd and 10th associating.  It also is an indicator of physical weakness.  Moon represents the body and Jupiter is not good for Libra Lagna.  It rules the 6th house.  These grahas together in the 3rd give weakness to the lungs.  Carson died of emphysema. 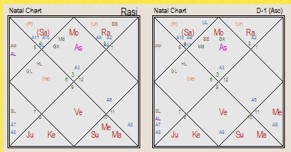 Farrah Fawcett, along with Johnny Carson, is one of the icons of our time.  Her decline in health and consequent death were well publicized.  With the numerous conjunctions in the rasi, there is only one yoga but it is a strong one.  This is the Jupiter/Ketu yoga in house 6.  Here the ruler of house 6 operates in unison with the ruler of houses 7 and 10.  Partners become enemies.  There are numerous examples of this in Farrah’s life.  She had a protracted legal battle with Charlie’s Angels producer Aaron Spelling when she decided to leave the show.  There was a romantic relationship with producer James Orr, whom she had worked with on The Burning Bed.  The relationship ended in violence.  Another producer cancelled a Broadway show she was to have performed in, and closed a show that she was backing financially.  Most of these incidents were publicized (10th house).  Since Jupiter is Sankranti and her 10th house lord, Farrah’s public image was weak.  She was perceived as pure fluff, and her enemies were strong, as shown by Mars and Ketu in the rasi.

No yogas occur in the 8th house.  But Farrah was a Sunday birth and so got the full effects of Sun, Moon, Jupiter, and Mars karmas.  Mars is a very bad graha for Gemini Lagna.  And note that the Lagna Lord Mercury is located in the 8th house.  This is not promising for longevity.  Both 6th house grahas are very strong, and Jupiter is also in the 6th house.  This chart is strong for difficulties.  There is much more that we could point out but we will keep strictly to the yogas operating in the chart.

There are a various number of yogas operating in each of the 4 example charts.  In Adolph Hitler’s case the yogas were instrumental to his rise.  In Lincoln’s case the yogas indicated karmic destiny due to their placement on the Rahu-Ketu axis.  With the involvement of so many marakas, they also involve his reputation in history.  Johnny Carson’s yogas indicated underlying success based on the qualities given in the Lagna, and also could have been a reason for the seclusion he pursued that stood in stark contrast to his public persona.  In Farrah Fawcett’s case, she had extremely strong malefics in yoga, and other strong malefics that she was the unfortunate beneficiary of, due to her Vara lord.  Each yoga is different, each outcome is different, and each life is unique.