Lagna Scorpio and lagna lord Mars are falling into fixed sign. Significator of government and ruler (Sun) has high shadbal and ashtakavarga score. Prima facie, this is a good omen for sustainability of government. Lang lord Mars is associated with 10th lord Sun in kendra.

As a result, premature termination of government is overruled. Weekday (budhwara) lord Mercury is in 8th house, but in own sign Gemini with two benefics. The government will surely sustain. Association of 1st and 10th lords also shows deep urge of prime minister to have a tight grip on rein of power.

No other planet cast good or bad aspect upon Sun + Mars combination. It mirrors that prime minister will not share his power to any other person or institution.

He will try to execute in an all-in-all manner. But at the same time, lagna is falling at zero degree of Scorpio. This sandhi position of Scorpio lagna denies desired materialization of government writ on ground.

Planets show “people” while signs and houses stand for “area of life, places and behaviour”. Here planets (Mars and Sun) are strong but 1st house (Scorpio) is not equally powerful (sandhi and in mrit-avastha). Consequently, prime minister’s proclamations and policies will be forceful and uncompromising, but implementation will be frail and feeble. 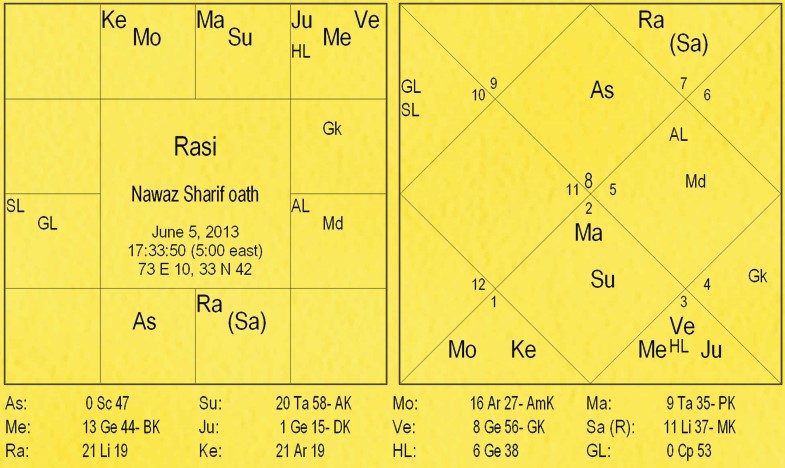 In this swearing-in horoscope, ascendant ruler Mars is slightly combust due to proximity of Sun, but this conjunction lead-to combustion is of separating nature and hence deemed week. As a result, Mars should consider free from major affliction of being combust.  Furthermore, Mars is robust, since it is aspecting 10th house (Leo) and its own sign Scorpio (1st house). There is another important factor to note. Sun is chara atmakarka (AK) and Mars is chara putra karaka (PK). There association in kendra is forming a powerful Raja Yoga.

Mars’ aspect upon 10th house denotes overbearing and unyielding style of running the prime minister office, and some rash and unpleasing steps as well. Mars’ involvement with lagna and 10th house reveals that he will have to take some important decision on military front. It should not consider tug-of-war between his office and military top brass. His decisions and policies related to army will not go against his government. Military will not revolt against him. He will have to take significant decisions, every time when Sun makes transit of Leo rashi (mid-August to mid-September of every year). So is the case when Mars makes transit of Leo, Libra and Scorpio rashi. Mars will sojourn in Scorpio longer than usual during summer 2016. This will bring dispute with a neighboring country, internal insurgency, and conflict with institution of army.

The 2nd house (Sagittarius) and its ruler Jupiter is quite weak. Saturn and Mars are casting direct aspect on 2nd house, whereas its lord Jupiter is relegated to 8th house.  This spells an ailing situation of finance for running the state affairs. This condition has turned grave due to association of 2nd + 11th lords with 12th lord (Venus). This is similar to nirdhana yoga (i.e. combination for poverty). Jupiter in vayayamsa (i.e. in Libra navamsa for Scorpio lagna) is again a bad indication. Scarcity of financial resources and budget deficit will remain a major problem of his regime. The country will experience accumulating debt crises and unsatisfactory tax collections. Week situation of 2nd house and Jupiter suggests incomplete developing projects and wavering implementation of promised targets. Monetary and fiscal condition of country will improve only partially after June 2014 (when Jupiter transits into Cancer). Lord of 4th house in 12th house while cluster of benefic planets in 8th house denote that government will sell out an important state asset or privatize a big public institution. In mundane chart, potent and benefic 8th house often bestows financial supports from foreign sources, international monetary organization and support from coalition partners.

In contrast to Scorpio lagna, the paka lagna (i.e. the Taurus sign where lagna lord Mars is occupied) is exceptionally strong regarding wealth. Three first class natural benefics are sitting in 2nd and two natural malefics are placed in 6th house from paka lagna Taurus. This planetary disposition entails exponential rise in prime minister’s personal assets, and growing wealth of his own family members.
Lord of 4th house (Saturn) and significator of masses (Moon) are in mutual opposition, and meshed up with Rahu-Ketu axis. Unfortunately, both Saturn and Moon are in cadent houses without any aspect or association of benefic planets. This is a terrible signature as far as people’s welfare and wellbeing are concerned. People’s suffering will not abate let alone getting rid of them. It is almost impossible for the prime minister to give real relief to the masses.

Saturn with Rahu in 12th house indicates presence of secret enemies. And these enemies are not belonged to military junta. In fact, dethroned and dismissed politicians and former ruler will act as secret enemies. By getting veiled support of foreign forces and media-person, they will keep intriguing against the prime minister office. However, such endeavours will not successful during first 2 years of tenure. These enemies will come into day light only when transit Saturn will make direct opposition with radical Mars (i.e. from year 2015-16).
9th house (Cancer), its ruler Moon, and karaka of judiciary Jupiter – all three are powerless. There is no good or bad association/aspect of these planets with lagna lord Mars or Sun. Hence, there is no likelihood of conflict between new government and judiciary. In fact, institution of judiciary will soon lose its significance in the eyes of public. As a whole, judiciary and government will remain indifferent to each other (because of 2nd-12th relationship). Here Moon (9th lord) is the only planet that is out of Rahu-Ketu axis. But Moon has no relation except with Saturn and nodes. Some judicial scandal will expose before the masses after 4 to 5 months (around October-November 2013). At the same time, obtainment of any soft loan from foreign sources is also anticipating.

Lord of lagna Mars is in kendra, but his rashi dispositor (Venus) and navamsa dispositor (Jupiter) is in 8th house from Janma lagna Scorpio. This foretells sustainability of government at initial 3 years but vulnerability and sudden weakening during last 2 years.
Sun and Mars in 7th house, 3rd lord Saturn in 12th house, and 9th lord Moon is in 6th house. These all are bad signatures for international affairs. Hopes for normalization of relations with USA, Indian and Afghanistan will go sour. There is no second opinion that this government will fail to build peaceful relations with neighbouring countries. From the seat of 12th house, Rahu is influencing 3rd lord, 7th lord and 9th lord.