Taken from Astrological Magazine, May 1977 issue

[He has been one of the heroes of Astrological Magazine of Dr Raman and a stalwart in astrology. Unfortunately no one remembers him. Those who have read his now out of print book on Indian astrology on various ascendants would know his brilliance as it’s the best book ever to contain subtle secrets and that knowledge of his book no elderly astrologer mentions. Such rare points can be seen in his book like for e.g. 11th aspect of Saturn which he quoted from a Tamil classic.  It’s unfortunate that elderly astrologers do not talk about this. For e.g. take the chart of Mahatma Gandhi, how will you easily, we repeat easily see that he would oppose the rulers/Govt , he does not have the traditional opposition of Sat-Sun in Rasi or Navamsa or Dasamsa but if you use what Shri Lakshmanan quoted in his book (writing from memory as we read it many years back and lost the book twice) you would see that Saturn is in the 2H of Gandhi and Sun in the 12H of abroad/exit.  So Saturn implemented itself in 11th from it and created the Saturn(mass) Sun (Govt/ruler) relationship and drove the Britishers into exile (12H). Test Saturn’s 11th aspect  on minimum 20 charts where you know the full story and also on the chart of Nehru where Rahu in 12H of exit (foreigners) is in the 11th from Saturn who sits in the 2H. He along with Gandhi drove out (12H) the foreigners (Rahu) but at the same time had relationships (7L Saturn) with a foreigner (Rahu) –  SA Publisher]

A in  Scorpio and Mars and Jupiter in the 11th in Capricorn. But, the place, date and  reader sent me his horoscope, as Meena [Pisces] Lagna with Venus and Rahu

end. So, I asked him to answer two queries of mine, whether he had (i) a long- lived, father and a broken education, in which case Lagna must be Kumbha or (ii)  whether he had a short–lived father and a high education( even up to I.A.S.) in which case it must be Pisces Ascendant. The reply came that due to some eye trouble and need for treatment his education was broken and his father was long lived and alive. So, I told him that Lagna was Kumbha and not Meena, as per mathematical calculations, and on that basis his education would be very ordinary [Jupiter lord of 2nd in neecha or debility in the 12th] but, he would prosper in business in his Rahu Dasa in partnership with a Muslim, thanks to Venus lord of the 4th and the 9th in the 10th with Rahu and the Sun Lord of the 7th in the 11th. 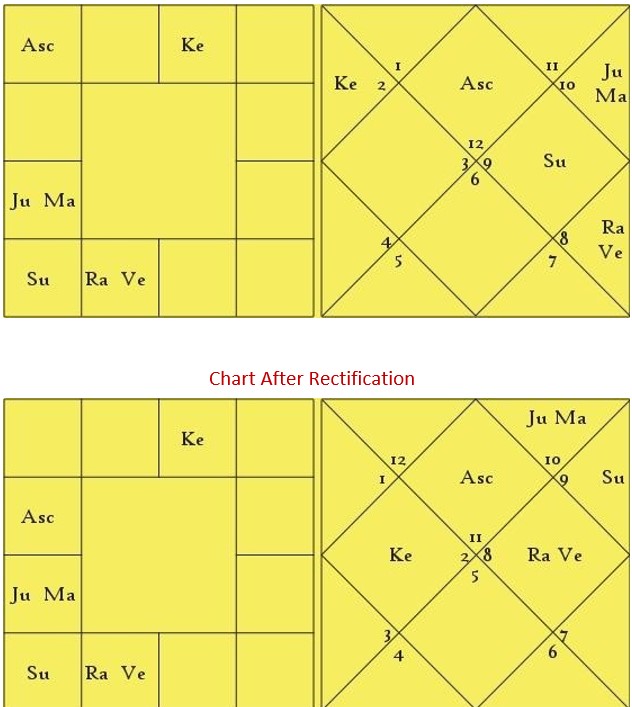 In another a case, a male horoscope was brought as a Kataka [Cancer] Lagna chart with Venus and Rahu in the 9th and Jupiter in the 8th, the Sun and the Moon in the 11th, Saturn and Mars in the 2nd. Naturally, the girl’s parents hesitated, as Saturn and Mars were in the 2nd, and the aspecting Jupiter was, after all, in the 8th and Mercury was in Aries. But, the young man is from a well- to do family with respect for elders and faith in God and is soft spoken. And, enquiry revealed he was born in Madras, where the sunrise was 9 minutes earlier so that Lagna was Mithuna [Gemini] with Mercury in the 11th, Venus in the 10th in Pisces, and Jupiter lord of the 7th and the 10th in the 9th – which tallied with the nature of the young man and his hailing from an affluent family, with his father alive and in a high position. And, the evil of Mars-Saturn combination is eliminated by the two planets being in 3rd, and by good Jupiter’s aspect from his good position in 9th. Hence, the bride’s people waived their objections and the marriage took place well and the couple are quite cordial. Therefore the need for fixing Lagna correctly cannot be over-emphasized. 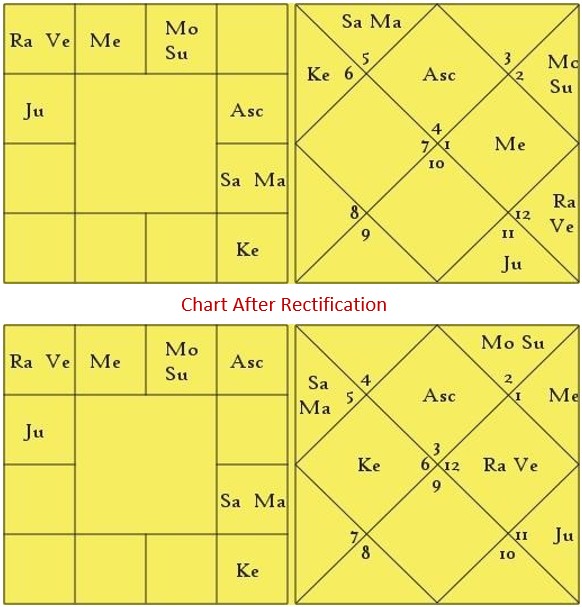 Similarly, planets like human beings have a dual nature, like Dr. Jekyll and Mr. Hyde of R. L. Stevenson. Firstly planets are natural benefics or natural malefics. They acquire beneficence as lords of good houses, and malignity as lords of bad houses. Secondly, they own two houses, one of which may be good and other bad unless the planets own both good houses like Mars for Kataka Lagna, or Saturn for Libra Lagna. So far as Saturn is concerned, his inherent maleficence is such that when he owns a good house and a bad house, as for Mithuna Lagna [the 8th and the 9th] or Kanya Lagna [Virgo] Lagna [the 5th and the 6th] his natural malignity prevails.  See:

A male child was born at a time curiously noted as “when the cow went to the grazing posture”. They noted Lagna as Vrischika [Scorpio] with Mars in the 3rd in exaltation, Jupiter, Venus and Saturn in Leo, the Moon in Moola in Sagittarius aspected by Jupiter but the Sun and Mercury lords of the 10th and the 11th in the 12th, the former in exchange of houses between the Sun lord of the 10th and Venus lord of the 12th being bad. But, the boy came up, as a bright scholarship student though born to a poor father, an archak of a Sri Ganesa temple. Eventually, he rose to be a permanent Deputy Collector. On Lagnasphuta, according to Nashta-Jataka fixation methods, Lagna was fixed as Dhanus [Sagittarius] with Jupiter, Venus and Saturn [lords of the 1st, the 11th and the 2nd in the 9th] and the Sun and Mercury, lords of the 9th and 10th in 11th. The Sun in debility showed a poor father; but, the Sun in the 11th is excellent, since, according to Bhavartha Ratnakara, the Sun, even though in debility, is very good in the 11th for inflow of prosperity. In fact, Sage Garga has praised the Sun in the 11th for a day-birth, and the Moon in the 11th for a night–birth, as destroying even a crore of doshas. See: 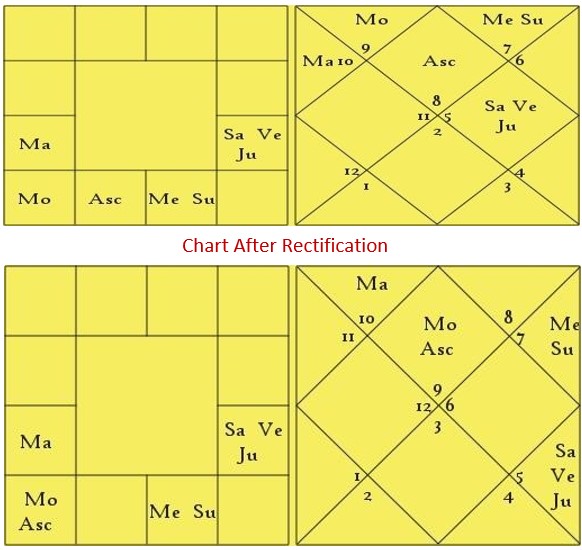 The native’s Putra [Sun] Bhava, an only daughter dying after marriage and an only son not cordial but hostile, though not both generally tallied with Dhanus Lagna for which Mars lord of the 5th and Jupiter are in shashtashtama [ the 6th and the 8th ] positions, Jupiter being with Saturn in the 9th.

A girl was born in Kalayukti year about 60 years ago, in the month of Simha, at about dead of night, in Poorvashadha star. The time was not correctly noted, as the delivery took place when the mother who had been gored by a bull near the private parts when she was trying to guard her prior child, a son; answering the call of nature in a neighbouring lane and was under bandage. Luckily the goring horns had not penetrated enough to affect the child in the womb. The astrologer cast the horoscope thus;-

The girl was married early, before puberty, in consistent with Rahu in the 7th and Mars the 7th lord in the 6th. But some how the adviser to the husband’s father praised Rahu, a  reptile in Scorpio and Mars lord of 7th and the 12th, the 12th being Moolatrikona, as being in Vipareeta  Raja Yoga. On Lagnasphuta, it was found that lagna had to be fixed as Gemini, [Mithuna], Jupiter in lagna, miraculously protecting the child in womb, despite a bull goring its mother. Only for Gemini, the Moon would be in 7th and not in 8th. See:

Hers was a grand four–day marriage in those days; and she was married to a botany graduate, eldest son of a senior Veterinary Officer, who passed Forestry with Honours and starting as a Ranger rose to be Conservator of Forests, before his retirement. From the Moon, Jupiter lord of Chandra Lagna [natal moon] is in the 7th; and the Sun and Mercury lords of 9th and 10th from the Moon are in the 9th from the Moon. True, Venus and Saturn in the 2nd gave her more daughters than sons, one son died and another is not affectionate, cordial or filial. But, my point is to stress the grave error in the original Lagna; and Mithuna Lagna alone explaining and fitting in with facts, since for ladies Chandra Lagna is very vital and important and from the moon. Jupiter the best benefic [also the lunar lord] is in the [7th from the Moon].  See:

Meaning that a natural benefic in 7th from the moon [for a female] gives Raja yoga. And from Chandra Lagna [Sagittarius], the 9th and the 10th lords are in the 9th from the lunar sign, the Sun being in his own house.

Thus, an error in Lagna will work havoc, whereas correct Lagna alone can help accurate prediction.