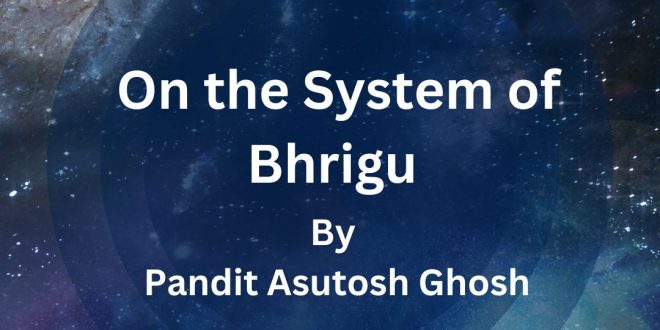 On the System of Bhrigu by Pandit Asutosh Ghosh

On the System of Bhrigu

BEFORE proceeding to deal with the Mahamuni Bhrigu’s princi­ples of reading the houses as revealed in his Bhrigu Mula Sutram and Bhrigu yogavalis, it  will be much appreciative and elucidatory if a bird’s eye view to taken of the principles of reading houses according to the other saints, Jaimini and Parasara.

Jaimini system can, at best, be called the system of combinations only, dependent on various factors, such as Argala, Pada Lagna, Upapada, Atmakaraka alongwith other Karakas, Hora lagna, Ghati Lagna, Varna-pada, Balapada, Lavapada, Kakshas, Sula, Trisula, Kemadruma  yoga, Panchamamsa Varga (which it not recommended by Mahamuni Parasara and others but by Tajik only) Karakamsa, Rudra Graha, Maheswara Graha, Dwara Dasa, Bahya Dasa, Paka Rasi, Bhoga Rasi, Upagraha and several others. All these technical terms must, first of all, be worked out for each horoscope, and then the various combinations enunciated by him, must be searched out for the purpose of their application in order to have the correct fitting and never-failing forecasts. Of course, it is a laborious task, but it ensures good and satisfactory results towards the end.  The factors enumerated by him are so numerous that each and every horoscope admits of applicability of much of them to point to such never-failing forecasts.

In connection with the reading of houses, it must be borne in mind that each one of the three systems of Bhrigu, Parasara and Jaimini refers to the periods in dasas formulated by them only, and not by others for the purpose of fruition.

The results of reading   houses according to Jaimini have been announced by the learned Saint to be fruitful only during the periods of Chara and Sthira dasas framed by him alone. So does Parasara say, with reference to his mode of house readings and his own dasas. The learned Bhrigu, however, does not so much in so many clear words, but at the time of enunciating the results of planets remaining in different houses (bhavas) in 44 per cent cases, he refers to different ages of the native when the results come out to be true according to him.

For example, he says, if Ravi remains in the 10th then at the age of 18th, the native becomes famous through his learning and becomes able to acquire good for his own personal needs.

Similarly, if Budha remains in lagna, the native will have to undertake pilgrimage at the age of 27.

Now, according to Parasara, we find a simpler mode of reading houses than that of Jaimini, and that is this : —

If the lords of particular houses remain in kendras or konas from lagna, then take it that those lords will be fruitful, work out well and be active, whereas if they remain in the 6th, 8th and 12th houses frorn lagna from their own houses, then take it for granted that the house of which they are lords cease Io function.

In the same sutra, it is further said that if the lords of bhavas remaining in the 2nd, 3rd or 11th therefrom those bhavas will be well developed and be appreciable effective on the native’s life.

Fruitful are those bhava lords, If they see or remain in their own bhavas or see the lagna.

In the same sutra, it is further said that if the house-lords remain in exaltation or become nourished by benefics (meaning seen or conjoined with by them), then those bhavas will be effective (strong), and give good results.

If the lord of a house goes to its enemy’s house or remains in a rasi of its fall, and yet does not see its own bhava, then the bhava it represents becomes weak and does not work satisfactorily.

For example, in a question whether a native will ever be able to amass wealth however small or big may it be, or in a ques­tion, whether he will have children or not, according to Parasara, it is to be seen, whether the lord of the 2nd house is in lagna or in the 2nd, 3rd or 11th place from its own house (i.e., the 2nd ) or whether it sees the lagna or its own house or is in exaltation.  If it so remains, then tell the native that he will always save something out of his earnings. Whereas if it is found that the 2nd bhava lord has gone to the 6th, 8th or 12th place from lagna or from its own bhava (own house ), then tell him unhesitatingly that, however big the amount he may earn he wilt never be able to save anything.

Similarly, if the lord of the 5th  is ­in the 2nd, 3rd  or 11th place therefrom or if it remains in lagna or sees it or remains in exaltation, then the native will have issues.  On the contrary, if the 5th lord goes to the 6th, 8th or 12th from Lagna or from own

bhava (the 5th house), then the native will never have any children; and if per chance, he gets any, they will not survive during his lifetime.  This is one of the methods for examin­ing bhavas according to Parasara.

But, in Bhrigu, different principles are adopted. No doubt, Bhrigu’s mode is the simplest of all, but, un­fortunately, there is no comprehensive literature dealing with illustrations.

The First Principle.—The learned Bhrigu, first of all classifies all the 9 planets into two groups,—(1) natural benefics and (2) natural malefics. The natural benefics according to this system are: (a)Guru, (b)Sukra, (c)Moon, and (d) The natural malefics are : {a)Ravi, (b) Kuja, (c) Sani, (d)Rahu, and (e)Kethu.  In bhava readings, Rahu and Kethu, ac­cording to him produce the same and identical results.

The Second Principle. — Over and above this, he follows strictly the Natural co-significatorships (Karakatwas) of planets. According to him, Ravi represents father; Moon mother; Mars brothers, land, boils, blood-poisoning, etc.; Budha boyish­ness and learning; Guru riches, reli­gion, sons and learning; Sukra wife or concubines; Sani longevity, afflictions and slavery; and Rahu or Kethu afflictions and suffering. Then Bhrigu enumerates the results of different planets occupying different bhavas, etc. For example, Ravi re­maining in the 12th produces: diseases of the bowels, abdomen, , at the age of 36, expends money for the wrong person, gets a downfall, and loses money. Owing to killing cows in a previous life, he lives in a foreign place.  If the lord of the house where it is posited, i.e. if the 12th lord get strength, the native will succeed in his prayers for his deity.  If a malefic is conjoined with Ravi in the 12th house, then he will be bereft of good beddings.  If the 6th lord conjoins with Ravi there, then he will have leprosy.  If a benefic in addition sees or conjoins it, then he will have no leprosy.  This is the general result on Ravi remaining in the 12th.

The Third Principle.- When­ever a planet is found to reside in a house, see of what strength is its That is the way how a planet is to be judged according to Bhrigu to give diametrically opposite results under two different circumstances created by the disposition of the house occupied a planet.  This is the reason why prayersincluding salvation which are judged from the 12th house become full, when the 12th house lord becomes strong.  How to judge the planet has been discussed under the heading of a separate prin­cipal No VI.

The Fourth Principle—The fourth principle that has been abundantly used by Bhrigu is that evil results are often minimised through
the conjunction or aspect of a benefic planet, viz., Sukra, Guru, Moon or
Budha. There is no question of a weak or strong Moon or a Budha conjoined with a malefic or not. Evils are aggravated on the aspect or conjunction of a planet inimical to the planet remaining in the house, this is also a principle, but in fact it can at best be said to be a corollary of the
above 4th principle.

Now, let us discuss the results of the Moon remaining in the 12th house for the purpose of illustrating Bhrigu’s principles. The native having Moon in the 12th house gets bad food, spends money on wrong persons, gets himself or herself entangled in a quarrel out of anger, and gains through gambling, hunt, plays, dancing’s, music, wine or women. If a malefic planet or a planet inimical to the Moon conjoins with it, then he will get hell after death, whereas if a benefic or a planet friendly to the Moon sees or conjoins with it, then the native will get heaven after death.

Have you noted that Bhrigu con­ceives of an enemy planet of the Moon, which other systems do not acknowledge?

The Fifth Principle.—In connection with the above kind of
queries, a question may arise,—which are the friends or foes of a planet?
Let the answer be embodied in the form of the fifth principle, viz.:

According to Bhrigu, when Mars is in the 12th native will feet the keen want of articles of daily use and bile and wind predominate the body.  If conjoined with or “aspected by a malefic”, the native will be arrogant.

Budha in the 12th, makes one w?? and charitable and confers changeableness and boyishness consistent with his Karakatwa. Guru in the 12th deprives one of wealth and learning, indications due to his Karakatwa. If exalted or aspected by benefics, the evil is neutralised.  The expenditure of money would be for righteous cause (धर्म मूलेन धनव्ययः dharma mūlena dhanavyayaḥ )

When Sukra is in the 12th, afflicted, one becomes poor and inclined to sensual things. When beneficially disposed, there will be wealth.

Note.—A planet remaining in the same place can produce diametrically opposite results under two differs conditions, according to Bhrigu, viz., poverty in one man’s horoscope and much richness in another’s. This is the peculiarity in Bhrigu’s reading When Sani is in the 12th, one becomes a patita or a fallen man and deformed. When well aspected or conjoined, the native goes to heaven after death; when afflicted, goes to hell.

In order to show the predominance of the principle of distinction between malefics and benefics in the house readings, all the planets remaining in one particular bhava especially in an evil one, the 12th have been quoted above.

As regards the use of the word Bhavadhipathibalayuthe which occurs abundantly in the Bhrigu Sutra, for the purpose of determining the quite opposite and yet good results, the learned Saint’s prescription of strength has not been found anywhere.

The following few instances will show astoundingly what diametrically opposite results follow on Bhavadhipathi being strong.

If Ravi remains in the 8ih house (house of longevity), gets the home.