ALLIED to the badhaka places is the problem of Argala.  Jaimini, has six sutras on this question.  They are:

The places or planets in the 4th, the 2nd, the 10th from the aspecting body cause Argala.  When more than two malefics are in the 3rd from the aspecting planet, there is a malefic Argala.  Planets in the 10th, the 12th, the 3rd from Argala cause obstruction to the Argala.  If the planets obstructing Argala are fewer or less powerful than those casing Argala, then the power of the Argala is not affected.  Planets in the 5th from a planet are counteracted by the influence of a planet in the 9th.  Count these places in the reverse manner in the case of Ketu.  These aphorisms are cryptic.

Let us explain.  Planets in the 4th, the 2nd, the 11th and the 5th from an aspecting body cause or become Argalas.  Planets in the 9th from Ketu become Argalas.  If these are natural benefics, then the Argala is benefic.  Malefics in the 3rd also cause malefic Argala.  Places, the 4th, the 2nd and the 11th having planets are counteracted by planets in the 10th, the 12th and the 3rd respectively.  The 5th is counteracted by the 9th and vice versa.  The Argala caused by a malefic in the 3rd has no counteracting agency.  The aspects in Jaimini are different from those given by Parasara.  All movable signs aspect all fixed signs except the ones next to them; all fixed signs aspect all movable signs except the ones behind them; and all common signs aspect each other.  Thus, the aspects of the movable signs are at 120, 210, 300; those of the fixed signs are at 60, 150, 240; and those of the common signs are at 90, 180, 270.  Benefic results will arise in the periods of the signs which have benefic Argalas.  These Argalas according to Jaimini cannot work if we accept his aspects.  A planet in the 4th from Mesha (Aries) cannot be aspected, as per Jaimini, by a planet in Mesha (Aries).

Another obstructing force or point is known as vedha.  When the Sun transits the 11th, the 3rd, the 10th and the 6th from the Moon he gives food results.  These results are obstructed when other planets at the same time transit the 5th, the 9th, the 4th and the 12th houses respectively.  Thus, from the radical Moon or Lagna we give the position of the planet in the first column and its obstructing point in the second.  The first figure in the first column is related to the first in the second in column, and so on respectively.

In Chart 1 when Saturn was transiting the 12th from the Moon, and Mars was in the 8th the native passed away.  It was in March 1937.  Saturn does not cause vedha to the Sun.  Similarly Mercury for the Moon, the Sun for Mars, and the Moon for Mercury do not cause vedha.  This happened in the Moon’s sub-period during the major period of Saturn.  Here the vedha from the Moon to Saturn is obstructed by Venus.  But transit vedha worked. 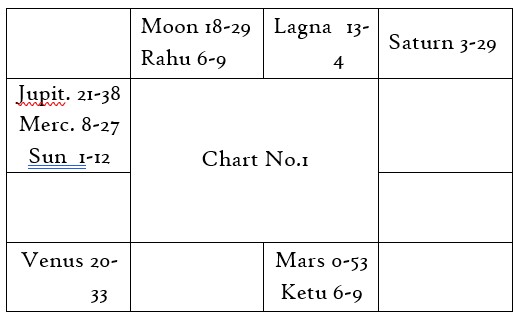 Latta is another obstructing point.  The counting of the constellation is in the reverse order for Prishta Latta and in the regular order for Puro Latta.  The 12th star from that occupied by the Sun, the 3rd from that of Mars, the 6th from that of Jupiter, the 8th from that of Saturn are Puro Lattas, the forward ones.  The 5th from that of Venus, the 7th from that of Mercury, the 9th from that of Rahu, the 22nd from that of the Moon are Prishta or rear Lattas.  If the constellation at birth happens to be the Latta star of a planet, during its transit there, one has ill-health and sorrow.  During the Sun’s Latta business is ruined.  The Latta of Rahu and Ketu brings misery; of Jupiter brings death, ruin of relatives, fear and insecurity; of Venus results in quarrels, of Mercury there is loss of position; of the Moon there will be loss.  When two or more Lattas coincide, the effects are intensified (Phala Deepika, 26, 42-47).

Sarvotobhadra Chakra also explains the points of vedha.  Following Jatakabharana, Horaratna, Raja Vijaya, Svara Chintamani and other works; we explain this and its significance.  First we draw the figure as below: 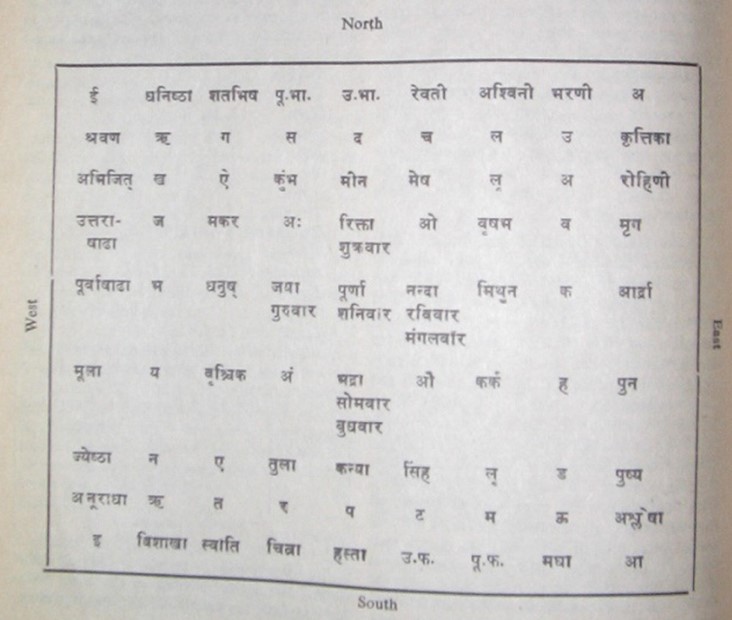 Nanda refer to the 1st, the 6th, the 11th tithis; Bhadra to the 2nd, the 7th, the 12th tithis; Jaya to tithis 3rd, the 8th, the 13th; Rikta, to the 4th, the 9th, the 14th tithis; Purna to the 5th, the 10th, the 15th, the 30th tithis.  Each group has its own week-day.  The Sun, Mars, Saturn, Rahu, Ketu, the waning Moon, and Mercury associated with maleficsa are all  malefic planets; the rest are benefic.  A planet is situated in a constellation; and by its aspect thee vedhas arise for it – one in the left, one in the front, and one in the right.  In the right or left the vedha will be with a star, a consonant, a Rasi, or a vowel only.  Thus a planet in Krittika has a vedha with Bharani, अ, Vrishabha, Nanda, Bhadra, Thula, त, Visakha, and Sravana.  One in Rohini has vedha with उ, Aswini,  व, Mithuna, औ, Kanya, र, Swati, and Abhijit.  One in Mrigasira has vedha with Kataka, क, Simha, प, Chitra, Revati,  ल, अ, and Uttarashadha.

The aspect of a retrograde planet is towards the right, and that of one in direct motion is to the left; when it is stationary, it is towards the front.  For Rahu and Ketu the vedha will be on the right; and for the Sun and the Moon it is on the left.  A retrograde malefic in vedha position causes great evil and a

When a planet is the junction of two constellations in any of the four corners of the square, the vowels अ, आ, इ and ई and the Purna Tithi are hit.  The results are अ – agitation or excitement, आ – fear, इ – loss, ई  – disease, and tithi-death.  When the vedha is with a star the result is confusion; with a consonant loss; with a vowel sickness; and with tithi or Rasi a great obstacle.  When there are five vedhas at the same time one is not likely to live.  One vedha causes fear, two bring loss of money, three obstacles, and four death.

In the vedhas of individual planets, different results follow.  The Sun’s – misunderstanding; Mars – loss of wealth; Saturn – ill health; Rahu and Ketu – obstacles; the Moon – mixed results; Venus – pleasures; Mercury – intelligence; Jupiter – good effect.  When the planet causing vedha is retrograde, the result is twofold; in exaltation threefold; in rapid direct motion the normal effect; in depression the effect is half.   A malefic vedha on a Tithi, Rasi Amsa, or Nakshatra should be avoided for all auspicious undertakings.  If a vedha caused by a retrograde malefic occurs during sickness, the patient is not likely to survive; but if the malefic is in direct motion, the ill-health will subside.  It the vedha is caused by a malefic on the week day of one’s birth there will be mental anguish.

The transit of the Sun in Vrishabha, Mithuna, and Kataka makes the East appear as set.  The vowels अ, उ, लृ, ओ  may be taken as belonging to the east; आ, ऊ, लृ, औ to the south;  इ, ऋ, ए and अं to the west; ई, ऋ, ऐ, अः to the north.  During the time the Sun stays for three months in any direction, all the stars, vowels, consonants, Rasis, and tithis are considered to be set.  When a star is set and there is vedha, the result is ill-health; when a consonant, loss; when a vowel, sorrow; when a Rasi, obstacle; when a tithi, fear; when all the five have vedha, the result is death.  The consonants and vowels refer to the initial letter of the name of the native.

If these are not set, the vedha produces different results.  If a star, growth; if a consonant, gain; if a vowel, happiness; if a Rasi, success; if a tithi, fame; if all the five, status.

In the Prakirnadhyaya of Uttara Khanda of Parasara Hora, Chapter 6 and verses 18 to 23 we have a list of Pachakas and Vedhakas.  Their places are counted from the house occupied by a planet.  We tabulate:

From  Lagna, Pachaka planets are the Sun in the 6th, the Moon in the 7th, Mars in the 9th, Mercury in the 10th, Jupiter in the 11th, Venus in the 8th, and Saturn in the 4th.  All these have an important role to play when we interpret the significance of the planetary transits.  As Parasara observes, the Vedhaka obstructs the emergence of the results, and so does the Pachaka to some extent.

Leaving Latta and other factors aside, we can tabulate the vedha signs, counting these from the sign in which the Moon is located.

For example in the horoscope taken as an example earlier the Moon is in the 12th house from the Ascendant.  Saturn came to the 12th house from the Moon and Mars was in the 8th.  For Mars the vedha sign as per the table is the 7th from the Moon.  The Moon at the time being in the 11th, the vedha came from Mars who was in the 8th.  The 11th house Mercury got a vedha from Saturn in the 12th.  The 1st house Venus too had the vedha from Mars.  These transit movements brought about the death of the individual.  Failure to consider the vedha positions gives rise to a faulty interpretation of the transit influences.  But this alone is not enough, since the radical chart and the Ashtakavarga are also to be taken into consideration.