I disagree, and one can easily find my reasons, supported by hundreds of practical examples, in many of my approximately fifty books. One can change ones destiny by changing ones location of Solar Return.

Let me introduce a case described in my book “Nuovo Trattato delle Rivoluzioni Solari” (Armenia) – a really striking case, in my opinion.

My daughter Laura had a peculiar birthday in 2001, compared to that of her astral twin. The latter is one of my friends’ daughter who was born in the same town as Laura, only twenty minutes later than Laura. According to my subsequent observations though, I believe that she was born only ten minutes later than my daughter.

Laura was born in Naples on the 27th of May 1975 at 11.25 pm. Both of them would have faced horrible constellations, had they spent their birthday in Naples: perhaps the most awful ones that I could imagine. In fact they would have had the Sun conjunct to Saturn in the 12th House, four celestials in the 12th House, and Mars in the 6th House of SR.

I warned both of them and suggested them to relocate their SR to Australia. In fact my daughter went and visited a very peculiar place called Monkey Mia. Despite its ape-like name, it is a magical place with bungalows facing the sea, where you can almost hug dolphins that come to the shore and “befriend” with tourists. Laura spent her birthday there, and two months later married. After that, she found home close to mine; in April she underwent an eye surgery that solved her serious short-sightedness; eventually she started looking for a serious job. According to her acquaintances, Laura had the most wonderful year of her life.

Let us see what happened to her astral twin, call her Ilena. She wasn’t able to leave and twelve months later she reported that she had had a real annus horribilis: the day after her birthday, her brother was urgently hospitalized for a very bad acute illness. He spent one month poised between life and death (she spent much time by his side, in the hospital). Three days after her birthday, while she was eating one of her molar teeth fractures; she had to take antibiotics for one month for a badly cured infection. After years of stable position, she lost her job and spent the whole year in unemployment. After seven years of stable relationship, her boyfriend left her to marry another woman; she fell into depression and spent the rest of the year in bed. According to her acquaintances, Ilena had the most awful year of her life. 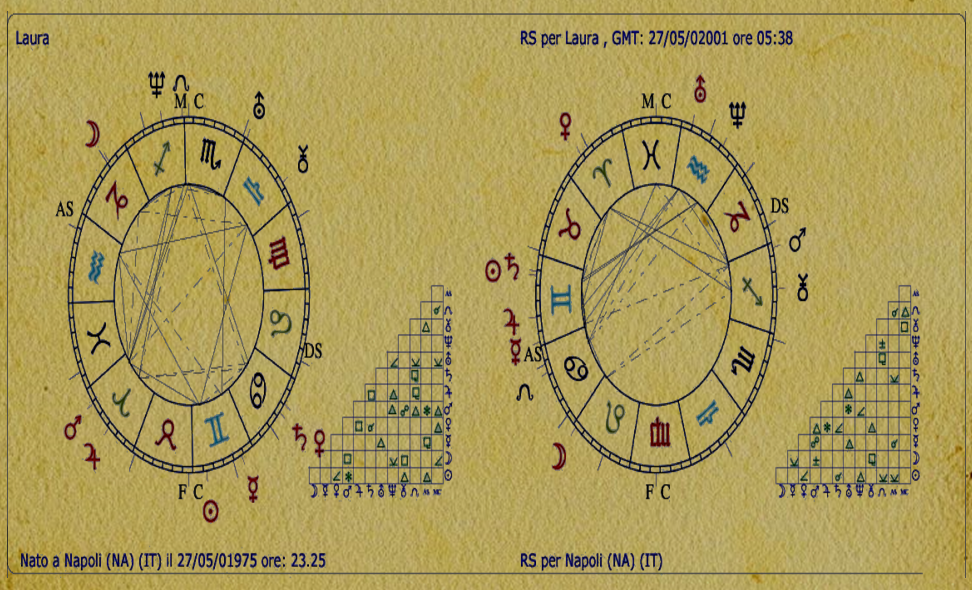 2001 Aimed Birthday Of My Daughter 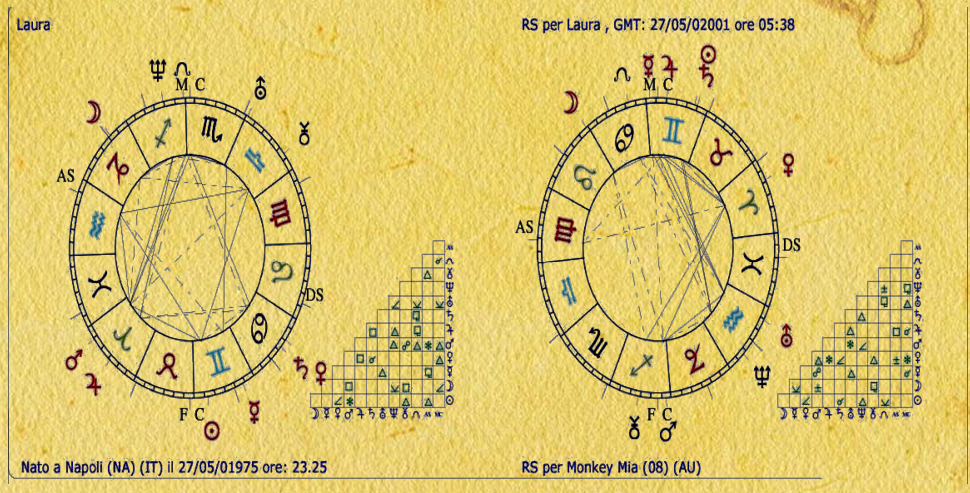 Now I would like to have this case explained by those who claim that the Solar Return must be domificated for the native’s place of birth, or place of steady domicile.
Of course, my friend authorized me to release – if necessary – the real name and astrological data of Ilena, just in case somebody, having no scientific argument to oppose, claimed that this case is a mere fruit of my imagination. Even more, this is what Ilena herself told me: “If anybody doubted of this story I authorize you to publish in future books of yours my birth certificate besides Laura’s birth certificate.

Even more: you can add my postal address, my phone number, and even my mobile phone number! And just in case some of your silly colleagues argued that we have invented this story together, I and you, there’s no problem: we’ll let him verify the date of the hospitalization of my brother at the hospital “Cotugno”; my via crucis at the dentist; my dismissal (it has been registered at INPS); the wedding of my former fiancé; and the antidepressant therapy that a real doctor – not a virtual one – ordered to me.”.

If astrology is true and if the “aimed birthdays” do not work, is there any astrologer in the world who’s able to explain this case? On the Web, somebody wrote that the ten-minute gap between the two horoscopes of the two girls may explain such a huge difference in the Solar Returns of each of them. My comment? If you believe so, you can believe in anything.

Not only: if you follow the non-reasoning of such persons, following the same twisted wavelength, could they prove that their life had been different if – at the very same Greenwich time – they were born in any other part of the world? How could they? Would they live a life with an Italian birth sky and a second life with, say, a Brasilian or Japanese birth sky? If so, we should come to the conclusion that neither classical Astrology is true.

If this isn’t enough, consider what follows.

Another really difficult case to solve for the opponents of the Aimed Solar Returns is the accident suffered by pop singer Madonna on the day of her birthday in 2005.

It is really a puzzling case. Madonna (born in Bay City, MI, USA, 16th of August 1958, at 7:05 am, according to Archivio Bordoni) fell down from a horse on the day of her birthday in 2005, actually a few hours after the Solar Return. She suffered from several fractures.
What do you think? Does the Solar Return cast for the States explain the event? Or does the Solar Return cast for the place where she was actually (near Bristol, in England)? In the latter case she had Uranus over the Ascendant and three celestials in the 6th House, among them the Sun and Saturn. Following: Madonna’s birth chart; her SR for the States; and her SR for Bristol, England. 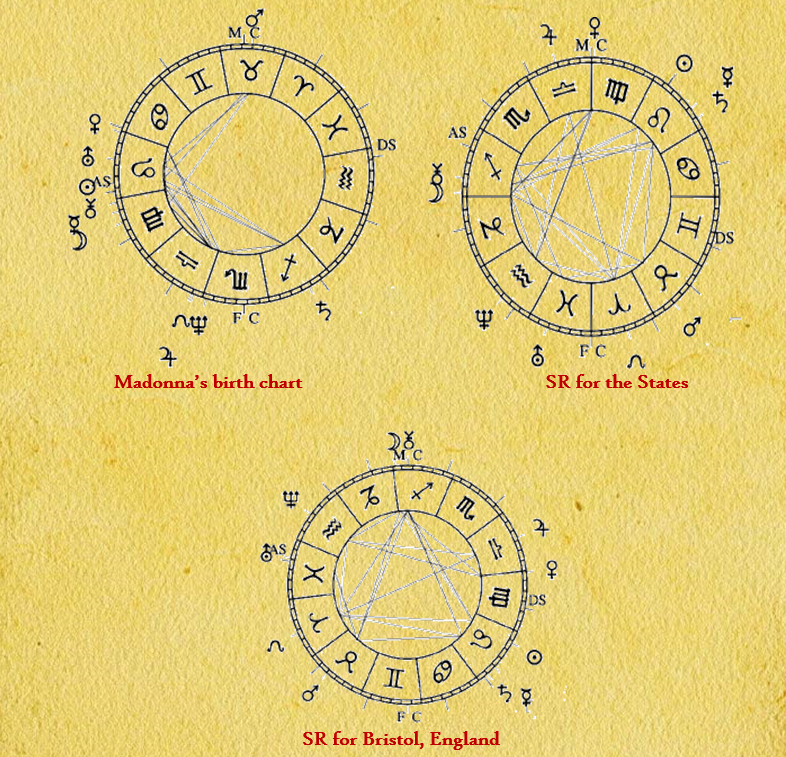