Tamil is one of the most ancient Indian languages & there are many classical Jyotisha secrets in Tamil literature that cannot be found elsewhere in  Indian  languages.  One  such  is ‘KumaraSwamiyam’  &  many  scholars have  given  it  the  highest  pedestal attributing their phenomenal predictions to  this  classic.  In  Tamil  language, Kumaraswami means Lord Muruga son of Lord Shiva. Initially Lord Shiva is telling astrology to Lord Muruga here & he in return passes it on to Rishi Agasthiyar (Agasyta) that our current deeds are based on past karma.

In the translation assignment, this author has striven very hard to give below the best possible translation from his knowledge & trust many will agree. If they have some corrections/suggestions on the same, they can contact us. One will appreciate & understand how difficult it is to translate from a traditional epic given in poetic Tamil of good olden days, into modern Tamil and then into English. It is a very painstaking job that deserves accolades.

Please find below this ancient text continued from previous parts.

The Inauspicious Hours In Transit Of Stars

The duration of inauspicious period of Four Nazhigai** will arise after the rise of the stars as detailed below:

(Note: two & half nazhigai will make one hour)

(**Copy Editor’s Note: This verse is explaining Visha Ghati of the Nakshatras, which is also known as Nakshatra Tyajyam. Regarding the time duration and its time of occurrence, different opinions are prevailing. Hence, for easy reference and comparison, a speculum has been tabulated here with equivalent time in hours)

Stars as Friends or Foes (beneficial or inimical),

The first quarter of Aswini, Makha & Moola and fourth quarter of Aslesha, Jyeshta and Revati in Kendantham1 and Punarvasu is a widow star.

Birth star is known as Vainasiyam, the star at the time of eclipse, three stars preceding and three stars following it are deemed to be bad and the following 9 stars viz., Aswini, Bharani, Satabhisha, Anuradha, Jyeshta, Moola, Swati, Visakha & Sravana are termed as Paadavaari.

(note: As the words in italics are in native language, they could not be translated )

(Wherever possible the scribe has translated the technical words in English. Some of the words are in a language other than Tamil. Readers are requested to take caution & verify the meaning of these words, which are in native language)

The domicile (abode) of Aswini star is oor (city or village), for Bharani it is tree, for Krittika it is Forest, for Rohini it is gruel pot, for Mrigasira it is below a cot, for Aridra it is below a Static chariot, for Punarvasu it is a huge earthen receptacle for storing grains, for Pushyami it is land meant for construction, for Aslesha it is a place where unwanted.

Things are stacked for clearance i.e. rubbish, for Makha it is paddy shoots or buds, for Pubba it is empty house2, for Uttara it is water, for Hasta it is water shore or bank, for Chitta it is farmland, for Swati it is cotton, for Visakha it is courtyard or open space, for Anuradha it is secluded & un inhabitated place, for Jyeshta it is shopping place, for Moola It is horse stable, for Poorvashada it is terrace, for Uttarashada it is place where dhobi Washes clothes for Sravana it is place of worship (temple), for Dhanishta it is factory (inferred to be crushing factory) for Satabhisha it is oil press, for Poorvabhadra it is street, For Uttarabhadra it is fire yard, and for Revati it is flower garden. Recite the alphabet as Applicable to the respective star as a tribute to it (reciting the natchathira thaesam).

Transited by Venus, Revati transited by Saturn, Bharani transited by Sun and Chitta Transited by Moon are evil stars. The period of two nazhigais from the first nazhigai after The rise Of Moola Is termed as abuttha moolam. Uttara for Sun, Hasta for Moon, Chitta For Mars, Swati for Rahu, Visakha for Jupiter, Anuradha for Saturn, Jyeshta for Mercury,

Natshetrayogam can be obtained by counting the number of days from the star Visakha Transited by sun, Poorvashada transited by moon, Dhanishta transited by Mars, Revati Transited by Mercury, Rohini transited by Jupiter, Pushyami transited by Venus and Uttara transited by Saturn to the respective star on a particular day desired and divide the Resultant figure by 7. If the reminder after the multiples of seven is 1 it denotes irutthai yogam, 2 denotes naasam (disaster), 3 denotes death, 4 denotes amirtham (inferred as longevity), 5 denotes subham (welfare), 6 denotes siddham, 7 denotes parigam. Asubha subhang koodil Visha yogam.

Draw** a vertical straight line. Draw 13 lines across horizontally as described in the extract. Starting from the top of the vertical straight line assign star Krittika. Assign at the end of Each line the names of stars clockwise as described in the extract. On a particular day Ascertain the star opposite to the one transited by Sun. The planet/planets that transit(s) This star is/are termed as Ekaarkalam. The last 2 nazhigai of star is Aagulam

(Note: words in italics are in native language. Wherever possible the English equivalent is given) 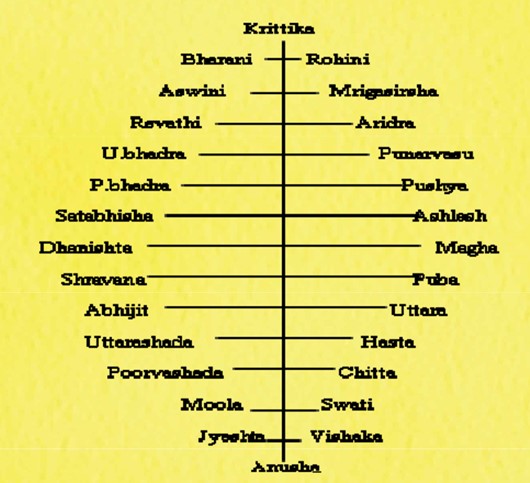